Waipā mayor Jim Mylchreest will stand again at next year’s local body elections – telling voters a recent stroke will not affect his ability to lead the council for a fourth term.

“I’m really keen to do another term if people are happy to have me. Yes, I’m up to the job, people need to know that,” Mylchreest, 68, said while acknowledging rumours about his health were already out in the community. “I’m feeling fit now. There are so many changes coming with local government. I feel I’ve got that much experience now to be able to help Waipā.”

It was 10 days before Easter this year and Mylchreest was at home working in the garden.

“It came right out of the blue, a stroke. I wouldn’t have known I had it if my wife (Robyn) hadn’t come home for lunch.”

His face was drooped and his nonsensical answers to Robyn’s questions were classic signs of a warning stroke, known as Transient Ischaemic Attacks (TIA).

A TIA is the same as a stroke, except that the signs last for a short amount of time and no longer than 24 hours.

Mylchreest said he did not have high cholesterol or blood pressure, never smoked and only has the occasional drink. But he conceded he was carrying too much weight.

“I absolutely want people to know about (strokes). I had no symptoms beforehand but once you get them, you get to the doctor, you just do it.”

Mylchreest had a shower before going to a local medical centre, something he says was a mistake.

“The moment you have any symptoms, get it seen to, the first three hours are critical.”

If Robyn had not come home, he would have kept working and the symptoms would have gone, and he would probably have been none the wiser.

More than one in 12 people will have a stroke within a week of a TIA. 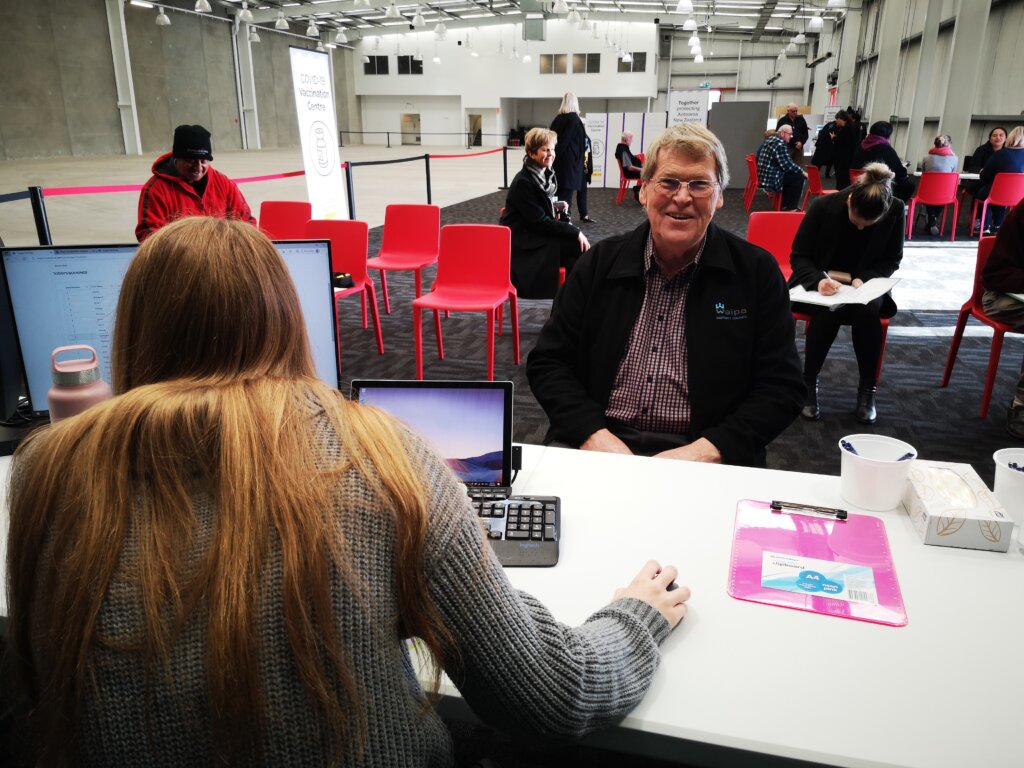 Mayor Jim Mylchreest checks in for his Covid 19 vaccination in Te Awamutu.

After the mini stroke, Mylchreest spent a night in Waikato Hospital’s stroke unit where he was given blood thinners and a brain scan. On discharge he was not permitted to drive for a month and told to make changes to his lifestyle.

Asked whether he felt the job as mayor added to the problem, Mylchreest said he never felt like he was under pressure.

“Obviously it is a stressful job on occasions, but I’m feeling fit now. I was lucky.”

Mylchreest said local government was going to undergo huge changes in the next five years and his experience would be critical.

Before becoming mayor in 2013, Mylchreest, an old boy of Te Awamutu College, spent 25 years in local government management including a lengthy period at Waipā District Council.

From 2002-2009 he was chief executive at Maungatautari Ecological Island Trust, the largest ecological restoration project in New Zealand.

At the 2019 elections, Mylchreest was re-elected mayor unopposed. Kai manaaki Herawana Tupaea of Te Awamutu, right, and Tiara Marama Phillips of Kihikihi, centre, provide support at the Te Awamutu vaccination centre for Waipā mayor Jim Mylchreest. Kai manaaki bring to life the manaakitanga provided at vaccination sites and make sure each person is cared for at every step of the process.