Cambridge-based cyclist Ellesse Andrews has won a silver medal in the women’s keirin at the Izu Velodrome.

5 August 2021 – Cambridge sprint canoeists Max Brown and Kurtis Imrie achieved their dream of competing at the Olympic Games today finishing second in the men’s K-2 1000m heats and fifth in the final.

The pair are coached by three-time Olympic medallist Tim Brabants. 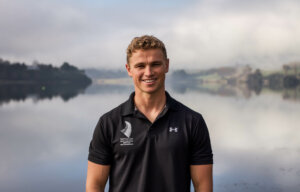 Max, originally from Whanganui, and Kurtis, who hails from Wellington, moved to Cambridge in 2018 when Canoe Racing New Zealand moved its training base from Auckland to Lake Karāpiro.

Emailing from Tokyo last weekend Max, who tutors music at Cambridge Middle School and has just bought a house in Cambridge, said he and Kurtis were “doing really well”.

“It’s really hot over here but we feel like we have adapted fast,” he said. “The course and Olympic village are amazing. Feeling privileged to be here!”

They are the only men in the six-strong New Zealand canoe sprint team led by multi-gold winning Lisa Carrington.

He said he and Kurtis had finished a three-week training camp in Komatsu last Friday and felt their boat was “running really well.”

In 2019 the duo reached the A final at the ICF World Cup event in Poznan, Poland, and later that year finished joint-sixth in the B final at the World Championships.