Get them to the church on time…

Cambridge’s Catholic community has started an ambitious $4 million campaign to build a new church and they’ve got the right man for the job – he’s done it all before. 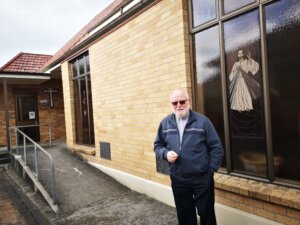 St Peter’s Church, on the corner of Anzac and Alpha streets, has been assessed as earthquake prone and needs thousands of dollars to strengthen it.

Parish priest Father Leonard Danvers said the brick church had been altered and enlarged over the years since it was built in 1926 – in 1959, 1980 and in 1988 when a parish meeting room was opened.

After polling parishioners, it was decided to build a new church and knock down the presbytery, built next door in 1915, to make two new buildings.

Paua Architects won a design competition and produced conceptual drawings featuring an upside-down cross which anchors the church to the centre of the site.

St Peter was crucified upside down because he felt unworthy to die in the same manner as Jesus Christ.

The new St Peter’s Church featuring an upside-down cross which anchors the church to the centre of the site.

Fr Danvers was parish priest in Mount Maunganui in 1986 when two Catholic churches were sold to make way for the new St Thomas More church.

That was a controversial move but once opened, parishioners embraced it, he said.

But he vowed never again until six years ago when he moved north from Taupō to become parish priest in Cambridge.

Parishioners had known for some time they would have to do something about St Peter’s Church but very little had been done. 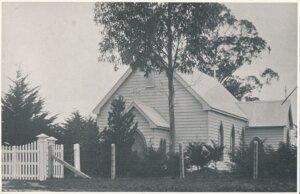 Fr Danvers said they had no choice; the church does not meet today’s safety standards.

There are some in the church who do not agree with the decision. The News has been approached saying it is a waste of money, that it is only the tiled roof that needs strengthening and that the original brick structure is rock solid.

Fr Danvers said he understands their views because $4 million is a lot of money and there is an emotional attachment to the old church for many of them. The appeal has already seen nearly $350,000 raised.

The hope is to have a new church and presbytery built by 2026 when the present church turns 100.

Leading architect Antanas Procuta of Cambridge, said the new church would be brought as close to the intersection as feasible, to better relate to Cambridge’s town centre.

In the new plans, the entry is now immediately visible and invites people onto the site and into the church.

The porte cochere (covered entrance) provides shelter, and with the use of the warm timber lining and the angled brick wall, it gently guides people to the entrance doors of the narthex (long, narrow porch or lobby).

“The building not only stands in homage to the parish’s patron saint, but also to the original church through the reuse of materials. The old terracotta roof tiles are stacked to create a rich textural backdrop to the cross.”

Procuta and Paua have won several architecture awards including two in Hamilton, for the Cathedral of the Blessed Virgin Mary and the other for The Chapel of St Mary’s Convent. Father Leonard Danvers outside what was the front of St Peter’s Catholic Church.

Cambridge’s Catholic history goes back to the 1860s when Bishop Pompallier, the first Catholic Bishop in New Zealand, was Bishop of Auckland and the congregation gathered where they could pray and celebrate.

When Thomas Croke took over as Bishop in1870, he wasted no time in acquiring a parcel of elevated land above the town in what is now Anzac Street. It boasted a dilapidated structure, once a post office, that became the first chapel in 1877. It was a wooden building 15.24m x 7.62m (50 feet x 25 feet) and surrounded by a white wooden picket fence to keep out wandering stock.

Nearly 40 years later the borer-riddled building was replaced by the brick structure in place today.

Kahikatea trees on Anzac St will remain. During demolition and the rebuild, Catholic services would be held in the St Peter’s Community Hall across the road at St Peter’s Catholic School.