A dairy in Grey Street is losing hundreds of customers and turnover has plunged 60 per cent since Waipā District Council blocked the Cambridge street for its Hamilton Road dual cycleway.

As patrons abandon the family business in their droves, owner Wei Na and his wife Yuan say the situation is so dire they may have to shut up shop leaving her mother and disabled sister jobless.

The council went ahead with the $1.7 million Hamilton Road Transportation project after the couple met staff, the launch of two petitions, a residents’ social media appeal and a warning about the project at a council committee meeting in February from Cambridge lawyer Andrea Twaddle. 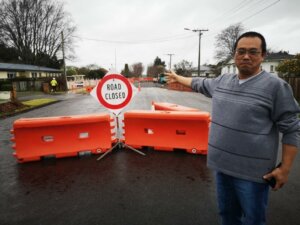 Wei Na will “see how it goes” once roadworks are complete.

Work began in April and will be completed in three stages. The aim is to reduce traffic volume and speed to make the main road gateway into Cambridge, once a state highway, cycle friendly.

Both sides of Grey Street and the south side of Hall Street where they meet Hamilton Road will eventually become one-way exits. Since work started, eastbound traffic is no longer able to turn right from Hamilton Road into Grey and Hall streets.

It is the absence of this traffic, which disappeared overnight when workers blocked off the road, that Wei and Yuan say is crippling their business.

The dairy has been in Grey Street for more than 60 years; Wei has owned it for six years.

When The News was in the shop on Saturday, there were two customers in an hour when usually there would be at least 100.

Neighbours report Yuan’s mother and sister, who both speak limited English, have been in tears in the shop. The sister has profound hearing loss and having the job means she has not claimed a sickness benefit.

“We continue with opening the door while the construction is ongoing as we want to provide services to our customers who are our neighbours and lots of them are elderly. We want to help our customers and also see how it goes once the road works are complete and then decide what to do with the business,” said Wei.

Regular dairy customer Stuart Barnett, a former community board member and police officer, said the whole project had been ill-conceived and rushed.

“It’s a community store, it serves the whole community. They’ve ignored that factor plus closing off those streets will have an impact on emergency services. I don’t think what council has done is fair,” he said.

Waipā District Council’s service delivery group manager Dawn Inglis said over the past year, the council had consulted with all affected residents and businesses in this area, including the Grey Street Dairy.

“This included two information evenings and several face-to-face visits with the dairy owners and other affected stakeholders. As a result of feedback collected during this time, Council amended the original proposal of a cul-de-sac at the intersection of Hamilton Road and Grey Street to a one-way access. This would still allow cars to exit on to Hamilton Road while creating a low-speed environment for pedestrians and cyclists.”

Grey Street was a priority street for future walking and cycling infrastructure with plans to transform it into a key route for children on their way to and from school and other pedestrians and cyclists, she said.

“With these future changes, we anticipate there will be an increase in foot and wheeled traffic past the business. In the meantime, Council is looking at how it can support this business and others by encouraging our community to buy local.”

Wei and Yuan first complained to the council about its plans to make Grey Street a cul-de-sac on November 30 last year and included 200 signatures from customers against the plans.

Erik Van Der Wel, programme manager Transportation replied in February saying the council had changed the plans so there was now a one-way exit to allow cars to go onto Hamilton Road.

“We think this change will help to reduce traffic pressures at other intersections and on adjacent streets during peak hours and will ensure local businesses still have multiple options to gain access onto Hamilton Road.

“This change will also help us reduce the speed and volume of traffic on these streets to make them cycle friendly streets which is critical for future walking and cycling networks in Cambridge.”

Early the next month he wrote again to Wei and Yuan. In a letter dated  March 3, he said the council had considered their submission.

At that February 16 meeting, lawyer Andrea Twaddle said she had significant concerns about the Hamilton Road project. She told the council the project did not reflect the council’s strategic priorities.

“There is a scale of this project that is disproportionate to the needs of Cambridge and it’s not underpinned by community consultation.”

She described the consultation as “defective” and said she was concerned once it was in the public arena, it would derail the good work the council was doing.

Twaddle said there was a lack of transparency about the true cost and urged the council to “go back and do the consultation properly.”

At the same meeting Van Der Wel told councillors Waka Kotahi would fund 51 per cent of the budget before June 30 2021 but not afterwards. Doing the work in autumn and early winter would present a lower risk to trees, he said.

Mayor Jim Mylchreest and Cambridge-based councillors Roger Gordon, Mike Pettit, Philip Coles, and Liz Stolwyk all spoke in support of the project at the meeting although Stolwyk did say it was important to make sure communications were “excellent” to ensure “we bring everyone along with us.”