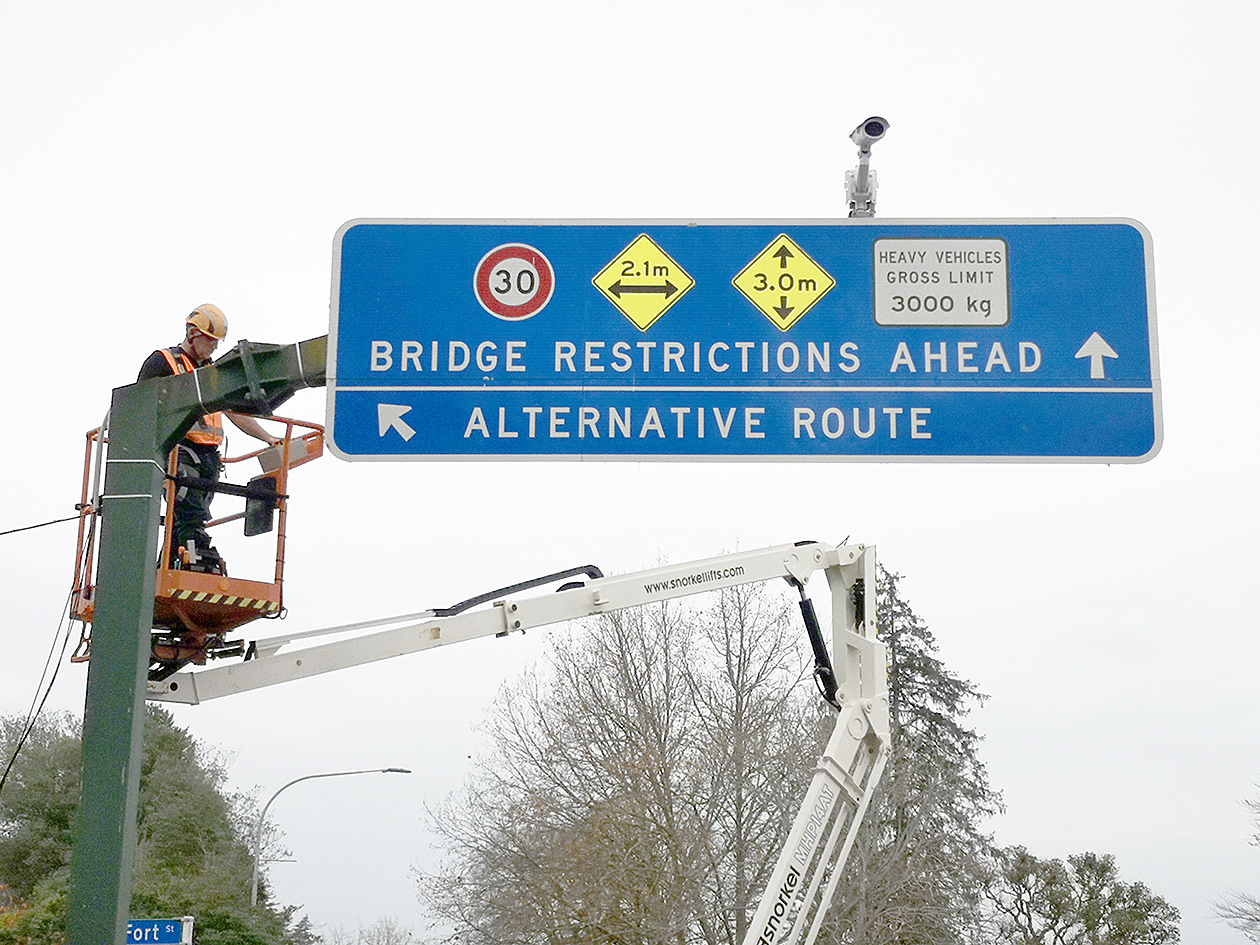 A new camera has been installed at the northern end of Cambridge’s historic High Level (Victoria) Bridge to detect if large vehicles are complying with warning signals.

The installation was completed last month and involves pointing the camera towards the bridge so council staff can see whether oversize vehicles take a detour when the warning sign is lit.

Victoria Bridge, built in 1907, is a high-level cantilever or steel arch bridge and a first for Australasia. It is 141 metres long, includes an 88-metre central arch, runs 38 metres above the Waikato River and is 5.2 metres wide. The bridge is rated to a 3-tonne maximum for each vehicle.

There have been several instances where heavy good vehicles, banned from using the bridge, have caused damage when they used it.

Six years ago, a milk tanker weighing 42 tonnes, was stuck in the middle of the bridge.

Earlier this year Waipā District Council disputed claims made on social media about the condition of the bridge saying it had no concerns about its safety.

A final report which would inspect and analyse the condition of the bridge deck was commissioned earlier this year and is expected to be publicly available soon.

But the safety claims continue to bubble away on Facebook adding weight to calls for the construction of a third Cambridge bridge.

The News asked Waipā District Council why the Cambridge wastewater pipe bridge from the Gaslight Theatre across the river to Alpers Ridge in Leamington was not converted into a pedestrian/cycle bridge when the bridge was upgraded three years ago.

A spokesperson said the cost to include pedestrians on the pipe bridge was significant as the bridge and its foundations were designed to a high standard to ensure minimal movement even in a seismic event.

This would safeguard the pipe against breaks and ensure wastewater could still pass over the river after such an event.

“A dedicated pedestrian bridge built to a lower specification at a more suitable location, would have been considered if money had been available at the time, however this was not the case,” the spokesperson said.

Waipā council owns the northern bank of the bridge while the southern bank is in private ownership.

A land strip alongside Alpers Ridge houses is in an unformed road reserve, owned by council, and is used for stormwater management with a discharge to the river at the end.

Asked why the council had not considered using the Public Works Act to secure the private land on the Leamington side, the spokesperson said the act could take up to two years to complete and the extra sewer capacity across the bridge was needed urgently to cater for growth in Cambridge north of the river.

This and the lack of money to build a pedestrian bridge and associated bankside paths were the primary reasons the concept did not progress at the time.

A Cambridge lobby group told The News last month it had found an ideal site for a traffic bridge and urged the council to “get cracking” and build it.

But the council says it will not make any comment on the plans for a bridge from near the Velodrome across to Matos Segedin Drive in Leamington, until it completes a transportation strategy.

If that strategy indicates the need to move at pace to identify a third river crossing, council will pull together funding from operating reserves to designate and acquire land for the bridge.

Council says it would cost at least $65 million and without a government subsidy (because it is too early and the demand is not great enough), all Waipā ratepayers would carry the full cost of an additional bridge.