Residents of one of Cambridge’s oldest streets say its care by Waipā District Council is of third world standard and that the street resembles a cross country course. In a submission to the council’s Long Term plan, residents’ spokesperson Alan Hayward said the condition of Hall Street had been of concern for more than 30 years. Its appearance was not up to the standards of surrounding areas and the street was the victim of incomplete roading and poor maintenance by the council.

Another resident compared the street to a cross country course and said the street has tree roots, uneven concrete, piles of asphalt, loose stones, poor ramps, and overgrown footpaths.

“It is a very beautiful leafy street, but its roads and pathways are untidy, inadequate and often dangerous,” the submitter said.

She and her partner had a painful personal reason to ask for improvements. One of them came off her mobility scooter and fractured her wrist while her partner tripped on an uneven concrete footpath.

Large plane trees on both sides of the street have often been explained as the reason why work has never been completed but this is not borne out by similar tree lined streets in Cambridge which have been fully sealed, said Mr Hayward.

Eight years ago, residents met with the council on site and supported a plan for a complete upgrade of the street which included paving on the western side and feature areas. The cost has since been estimated at between $345,000 for basic completion and $1.25 million for a full solution. 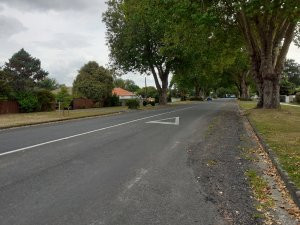 “Following formal representations made in 2013 on behalf of residents, council confirmed that Hall Street “… is included in the 2015-2020 year plan for inclusion in the first three years.

“No visible or safety improvements have been undertaken and it remains for the most part and especially north of Williams Street unfinished, poorly maintained and unsafe,” says Mr Hayward in his submission.

“It should not be necessary for endless requests to be made as part of a district planning process to ensure councils attend to their primary responsibilities. “Roading arguably should fall into a similar category as rubbish disposal, waste and water services, street lighting, parks management etc., and with some secondary services such as the library, museum and pool facilities.

“People have an element of trust that this is what the council and its elected representatives know to do, without constant follow up and reminders to attend to its fundamental tasks,” he said.

“The situation with Hall Street as we move forward has arguably become simply one of funding and priority for Council’s rates funded operations.”

The council, in its response, said it was trying to provide a suitable solution which provides the amenity residents want to see while protecting the large trees and special character of the street.

“Footpath renewals are based on condition and use, in this way footpaths across the district are inspected and the worst condition paths are replaced each year,” the council said.

• In a separate submission to the Long Term Plan, Mr Hayward said council should look to future proof the old Bunnings site in Cambridge for car parking.