Simon Perry, Mayor Jim Mylchreest, Marlene Julian and Tiffiney Perry, take a tour of the new swimming facility at the opening on May 14.

Waipā’s newest facility is attracting big numbers in its first days of operation not only from locals but also from neighbouring communities.

While Go Waipā would not release figures, the News understands pool users are not only coming from the Cambridge community but also from Te Awamutu, Morrinsville and Hamilton East/Tamahere.

The Swim Waipā programmes for all ages and abilities is also being well supported. The programmes run for parents and babies, pre-school and school age children. In addition, squad swimming for children with a good level of swimming ability and adult learn to swim classes are doing well.

But members of the disability community remain unconvinced by Waipā District Council’s claims it consulted with stakeholders before opening the Cambridge pool.

Brian Prescott says he will still take his daughter Anna to Waterworld Te Rapa to use the hydrotherapy pool despite Cambridge having one. 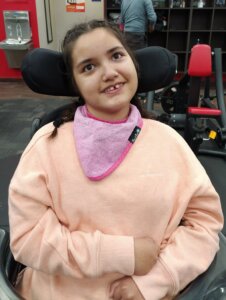 Anna, who has polymicrogyria (a brain disorder) is in a wheelchair and weighs nearly 50kg. She has cerebral palsy type symptoms and needs constant assistance.

“Hydrotherapy is one thing she loves and with support she can float and move through the water,” says Mr Prescott. “We can change Anna into her togs at home and travel to the pool. We do that when a pool doesn’t have facilities.

“But when we get to the pool, how does she get out of her wheelchair?

“A trip to the pool needs two carers. And when she finishes her swim, what then? We need to lift a wet child back into her wheelchair and drive her home. Cold and wet.”

Prescott concedes they could use the poolside hoist but lifting her out with that will mean a wet wheelchair.

“All these are just barriers to Anna doing something she loves.

“We find that most people don’t understand how difficult a basic family outing is. Unless they have been in our shoes they couldn’t really,” he says.

“Our biggest mistake was trusting Waipā District Council to listen to submissions. We blame ourselves for sitting back thinking it was going to get done.

“No consideration had been given to a changing room suitable for people with disabilities, and they are now working through a process to source something suitable and figure out how it could be installed.