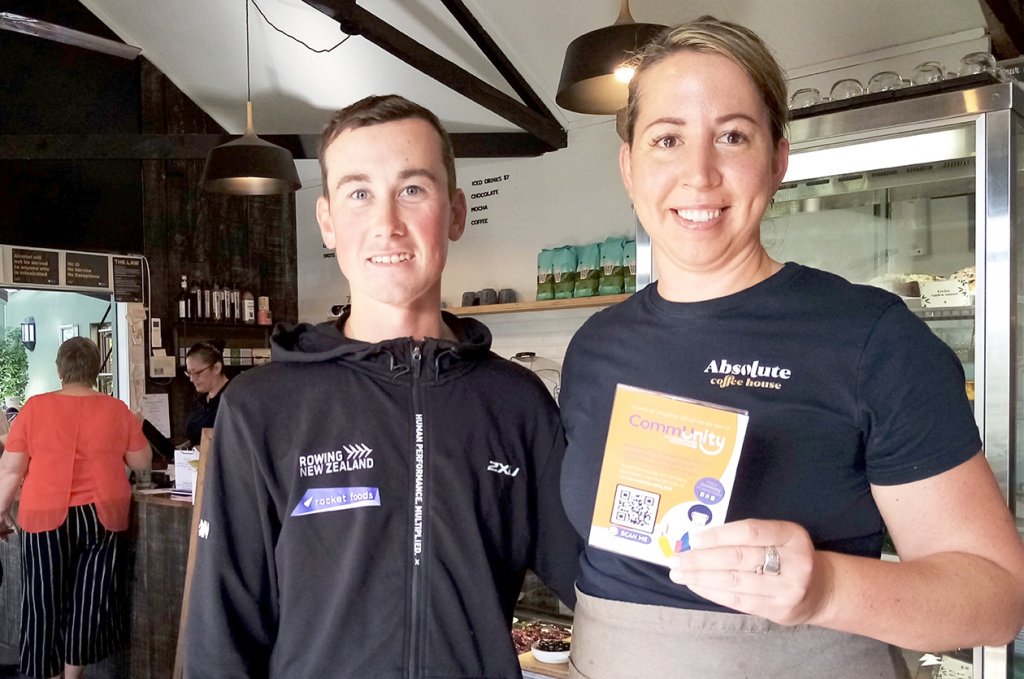 Sam Bosworth with Absolute Coffee House owner Mel Teesdale. Absolute has become the first outlet in Cambridge to bring CommUnity on board.

A new initiative linking businesses and their customers with a novel opportunity to support a range of community groups is being seen as a fundraising gamechanger.

Called CommUnity, the initiative works by having shoppers purchase from participating retailers and merchants, who then donate between three to five percent of the transaction to a community group of the shopper’s choice.

Behind it is former New Zealand international cricketer John Parker. The Waikato-based sportsman has spent much of his life fundraising to help community groups, and decided the time was ripe for a new type of fundraising initiative, one that would fill the gap increasingly being felt as fundraising through gaming loses its appeal.

Taking on the role of CommUnity ambassador for the Waipā region is an equally energetic and community-minded sportsman, Sam Bosworth.

Sam is a successful coxswain with Rowing New Zealand.  Since starting his rowing career in 2009, he has helped various rowing teams win well at international competition level. He is now just days away from flying to Lucerne in Switzerland to cox the 2021 Rowing NZ Elite Men’s Eight, where he hopes success at the 2021 FISA Final Olympic Qualification Regatta will gain the team entry to the Tokyo Olympics.
In the meantime, armed with boundless enthusiasm for CommUnity, and tertiary studies in business and marketing, he is taking the initiative to businesses within his region – Cambridge, Te Awamutu and Kihikihi.

“There are ambassadors for other areas across the North Island – Bay of Plenty, Tauranga, Thames, Hamilton, Auckland and so on,” he said. “Our job is to get merchants and community groups on board and raise awareness about CommUnity.”

Sam said the app will list participating businesses, making it easier for people to support outlets that have signed up to CommUnity, knowing that a portion of their spend will go towards a worthwhile community cause.

“Once the app is up and running, it will be very easy for people to use,” he added. “Each business will have a sign on their counter bearing a QR code, and all the customer needs to do to participate is open the app and hold their phone up to the code.”

The first business to come on board in Cambridge is Absolute Coffee House.  Owner Mel Teesdale said she was delighted to support the initiative as an easy way for people to give something back to their community.

Sam reckons it is a ‘fantastic idea’ and is happy to be a part of it. “We’re not doing this for profit, it is all with a view to helping the community. Besides, I’m doing a lot of networking with this … forming some great connections.  It is really good experience for me.”

Sam Bosworth with Absolute Coffee House owner Mel Teesdale. Absolute has become the first outlet in Cambridge to bring CommUnity on board.