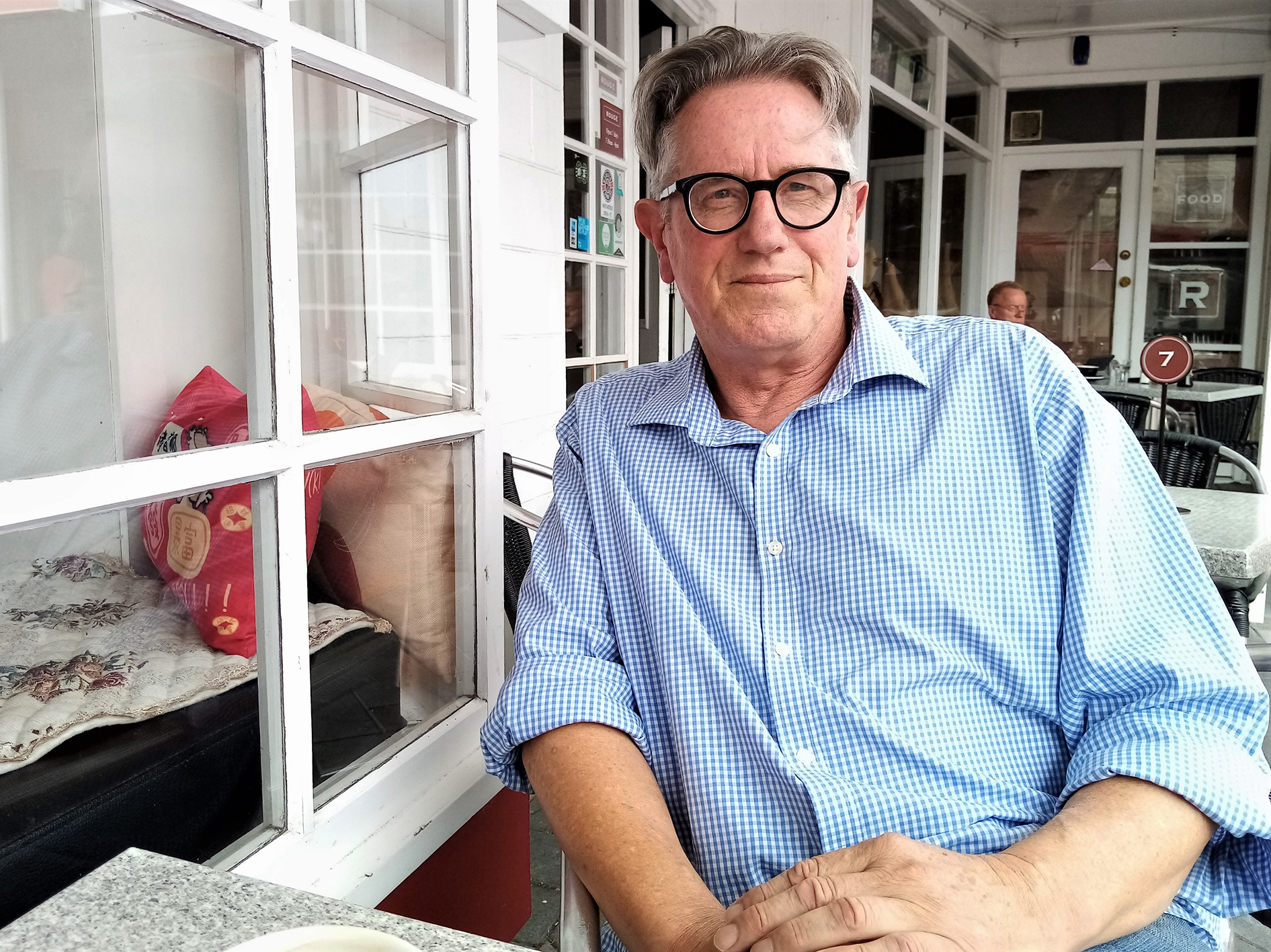 Michael Jeans, a familiar face musing on a life behind the lens.

Michael Jeans’ contribution to the photographic story of Cambridge has been recognised with a Cambridge Community Board Community Service Award.

The award was presented lasty week at a Cambridge Community Board (CCB) meeting, part of which was held at the Cambridge Primary School hall to better accommodate increased numbers.

In presenting him with a framed certificate and potted hebe, CCB chairperson Sue Milner said: “We don’t do this very often, and only for very special people. Michael is one of those … he is this town’s unofficial photographer.”

Most would view him that way – his rangy frame appears everywhere, always high energy, hair flying.  His own characterisation is of a self-taught documentary photographer, a family-centred homebody, someone content to capture the charm of his own place.

Michael was born in Cambridge, the eldest of three to Phyllis and Bruce Jeans. His great-grandfather, Fred Potts, built several of Cambridge’s significant buildings and his mother Phyllis was in a genealogy group with historian Eris Parker. His father Bruce, also Cambridge-born, recently moved into Resthaven on Burns, leaving a marked gap in Michael’s life.  He had been his companion and carer since Phyllis died in 2005.

After attending primary school in Whitehall, Michael went to Cambridge High before embarking upon three non-consecutive waves of incomplete study – dairying, psychology and sociology, and teaching. His interest in photography was likely sparked by the gift of a Kodak Instamatic on Christmas Day 1964. Later, as he carved out a career, he was deeply influenced by some of the region’s eminent photographers, and he ended up teaching photography at Wintec for about a year.

Several pivotal moments spurred him on, one in the early 70s when he photographed Robert Plant and Jimmy Page, then the Rolling Stones on stage using a massive telephoto lens. “I thought I was such a hot shot, but when I was asked what it was for, I started to look at what I wanted out of it.”

The next pivot was starting his business in the late 1970s, initially doing wedding photography. He reckons he has done well over 700 weddings. 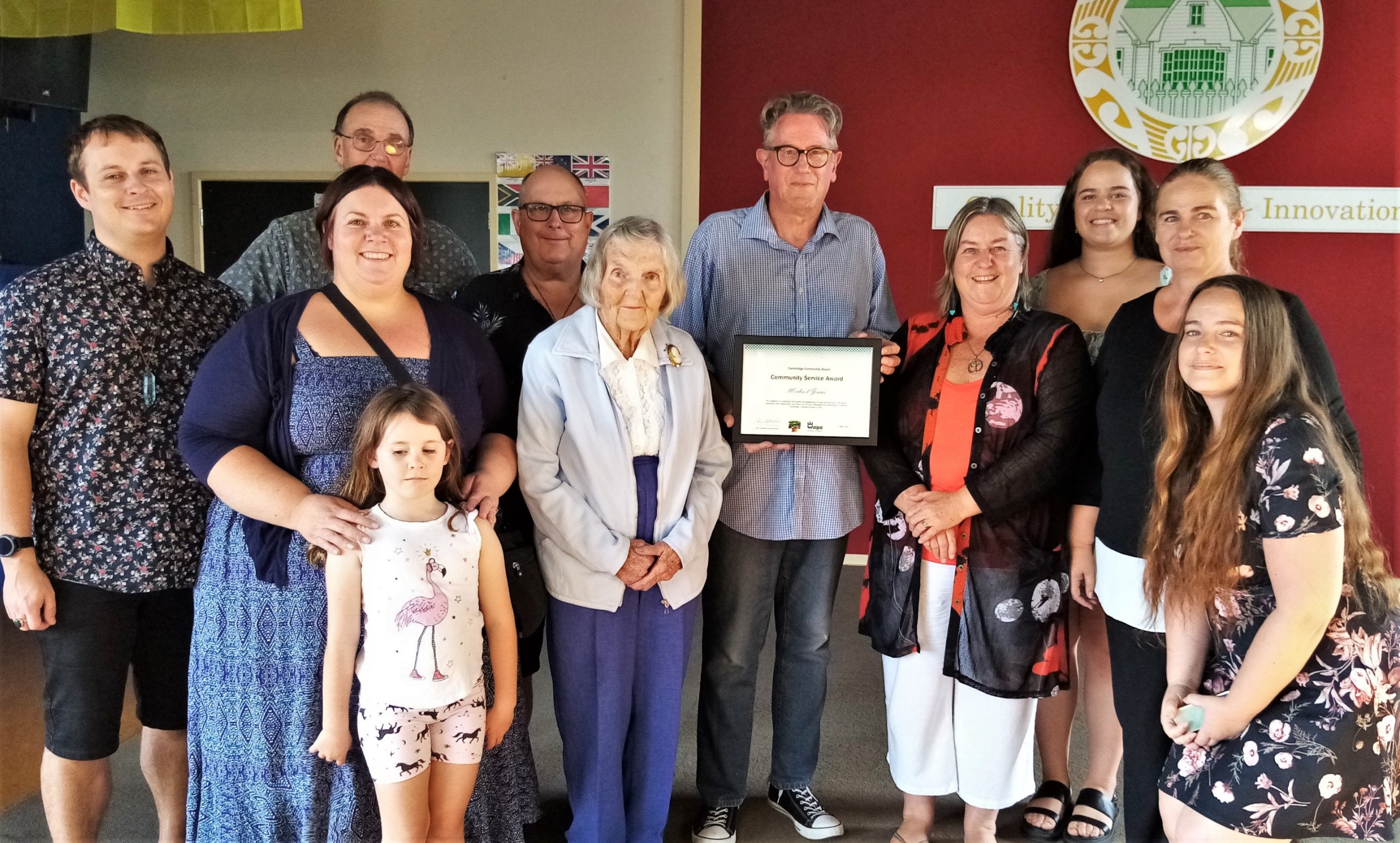 Family and friends with Michael after the presentation. They are, from left, cousins Ben Gomas, Stephen Jeans, Amy Airey and Danielle, Michael’s aunt Dorothy Jeans, Brett Gomas, Michael, his cousin Helen Gomas, and friend Patricia Rushton with her daughters Hannah Rushton and Jo Buddy (at front). Michael and his cousins are descendants of one of Cambridge’s pioneers, Fred Potts. His aunt Dorothy is the widow of his uncle Wallace Jeans. Helen is the daughter of Michael’s aunt Loris Kenny, nee Jeans, and also pictured are two of Helen’s three children, Ben, Amy and Danielle.

Through the years Michael has become Cambridge’s man behind the lens, photographing people, places and events in delightful, often unexpected, detail.  He has taken around 300,000 images since 2000/01 – his total archive is closer to a million. One day, he hopes it will contribute to a valued archive for the town.

“I need to do some work to make sense of all that, to put it in order and give context to the photographs. I might knock those numbers down to between 5000 to 10,000.”

Destination Cambridge has worked with Michael for several years.  They purchase his images for promotion purposes, and it was his assistance with photographs and videos that contributed towards Cambridge’s win in 2019 of the Keep New Zealand Beautiful Awards (KNZB) ‘Most Beautiful Large Town’ award, and to the town’s Victoria Street picking up the KNZB ‘Best Street’ category win last year. He was made an honorary lifetime member of Destination Cambridge in 2018.

“I honestly don’t think I could have done anything else,” he smiled. “I’m in my happy spot.”

Delighted to have received the award, he said what he most enjoyed was seeing the joy it gave his family and friends.