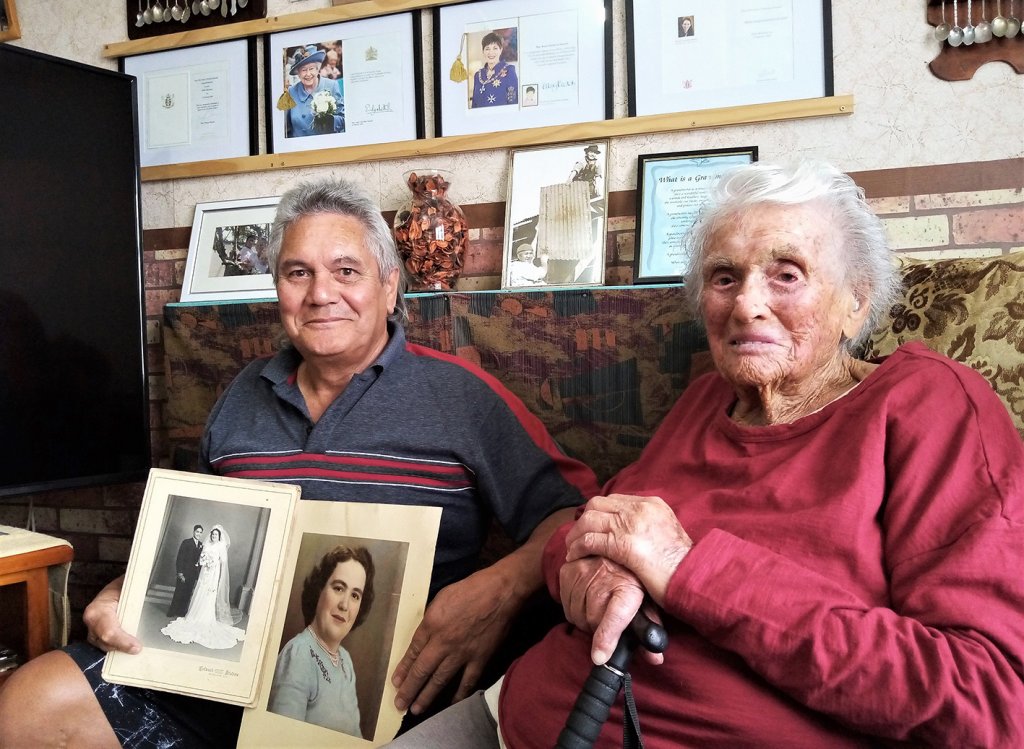 Anne Samuel and her son Mervyn pictured just before Anne’s 101st birthday. On the mantle are framed cards she received from Queen Elizabeth, Jacinda Ardern and NZ Governor General Dame Patsy Reddy on her centenary, celebrated just before lockdown.

It’s very likely that Anne Samuel started her 101st birthday on March 15th in much the same way she starts every day –  tucking into a bowl of weetbix, ricies and banana … it’s the sports-loving centenarian’s way of supporting the All Blacks.

The rest of Anne’s Ides of March birthday was spent catching up with great-grandchildren, hearing about their schooling and sports updates.  There were 27 family members present for lunch at the Ranstead Rd farmhouse she has lived in for 62 years, and now shares with her son Mervyn and daughter-in-law, Ann (without an ‘e’).

Anne was born in Auckland on March 15, 1920, the ninth of 13 children. After leaving school, she went to work in an ammunition factory in Mt Eden and recalls an explosion that resulted in the death of a workmate and the injury of several others.  After meeting her husband Philip through her brother, the pair married in December 1951. They went on to have four children, 13 grandchildren, and 24 great-grandchildren, with another one expected in the winter.   Philip died in 1998.

Sport and education always played an important role in Anne and her family’s life.  In her younger years, she played sports with several clubs. “In typical humble fashion, she always gave credit to everyone else for her being in the team,” Mervyn said.  Her sister-in-law Joyce Guptill also played basketball and cricket, and the two were in the same marching teams.

Later on, providing her children with a good education and imparting that love of sports was a driving force in family life. A typical weekend, he said, was watching two or three games of sports in different towns. Two of their children, Gillian and Gerald, went on to win Waikato honours; national honours include those accorded to her great-nephew, Black Cap Martin Guptill, nephew and rugby league star Sam Stewart, and hockey star Kate Ivory.

The family moved to Cambridge in 1958. Anne worked at Tracey’s sewing factory in town before taking a job in the laundry at Waikato Hospital until she retired.

In 1993, the couple whangai’d a granddaughter, who went on to become their first university graduate.

Anne has fond memories of travelling to Australia, and with big families on both her and Philip’s sides, she went to great lengths to remember family birthdays. One count of first cousins numbered 108.

As her eyesight fades and the television screen gets bigger, one of Anne’s greatest pleasures remains watching sport. Another is sitting in the sunshine on the rural property that has been home for over six decades.