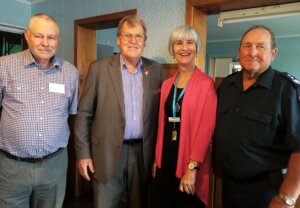 A lucky perk born out of 2020’s lockdown for Cambridge Museum administrator Karen Payne has become the bedrock of a new exhibition focusing on the history of the town’s volunteer fire brigade.

Last year’s lockdown presented Karen and museum manager Kathryn Parsons with a rare window of opportunity to read and update some of the museum’s collection.  Karen found herself trawling through material linked to the formation of the Cambridge fire brigade.

“When I started putting it in order it read like a screen play.  There were stories in there that weren’t just interesting … they really jumped off the page,” she said. “So, I started looking into it and talking to anyone who might have more information.”

The late 1880s in Cambridge were a hotbed of twitching curtains and suspicion, by all accounts.  Several tragedies unfolded at a time when the town’s leaders were desperately seeking a reliable water source that could be used to fight fires. There were tales of arson by a ‘fire maniac’, the drunken stumblings of a night watchman appointed to prevent miscreants setting fires, stories of women putting out fires by carting water in their voluminous skirts, and finally, the relief felt by all when the water tower was built in 1903.

Cambridge Historical Society records show that between 1881 and 1888, there were at least 32 fires in Cambridge. Duke St was the main thoroughfare at the time, despite being dubbed a sand road that in winter turned into a ‘veritable bog-hole’. A major fire there in 1889 destroyed scores of businesses and left a smouldering mass of ruins opposite the Masonic Hotel.  The fire brigade was formed over a decade later. 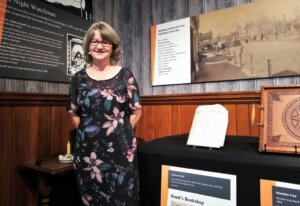 Cambridge Museum administrator Karen Payne amid some of the fire service stories and images she discovered during lockdown and now on exhibition.

These stories and more are at the heart of the new exhibition.   A formal function to mark its opening was attended by Waipā District Mayor and Deputy Mayor, Jim Mylchreest and Liz Stolwyk respectively, members of both the Cambridge Historical Society and the Cambridge Volunteer Fire Brigade, and other interested parties.

Don Gerrand, who has been with the brigade for 53 years, brought apologies from Winston Steen, who has chalked up almost 60 years with the service, but who was unwell on the night.  Karen said both Don and Winston had spent much time helping the museum identify objects in the collection and had lent them some items to go on display in the exhibition.