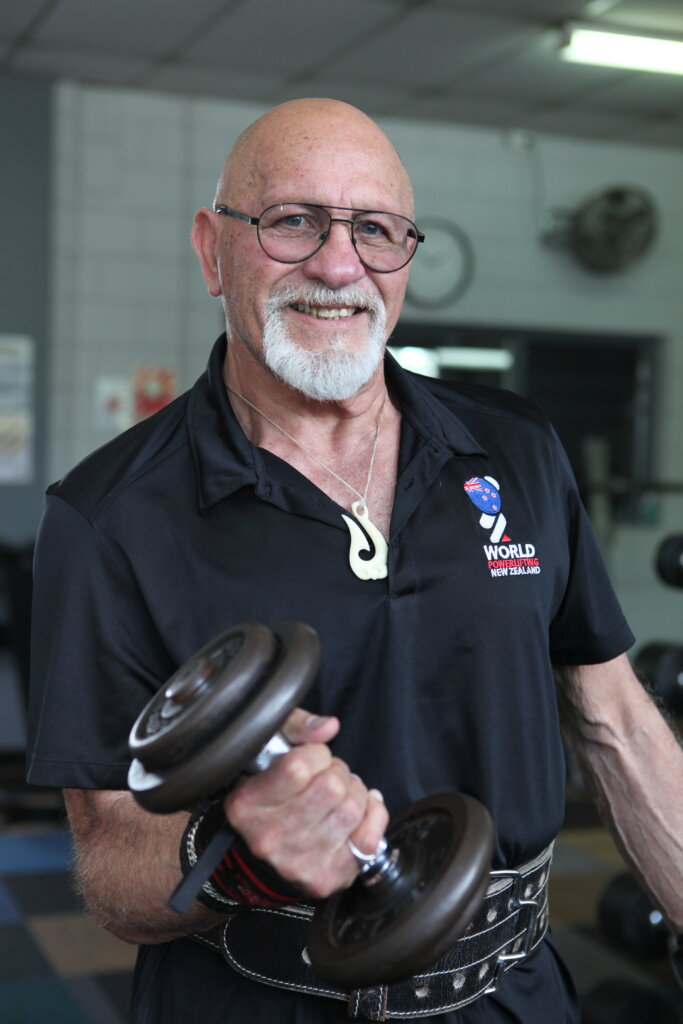 Doug Mienie is almost 81 but could easily pass for 60.

The secret, the gently spoken octogenarian says, is “good living and hard training”.

Doug, recognised in the Cambridge Sports Walk of Fame in 2018, has been striving to succeed in top level sport for six decades.

Earlier this month he competed at the New Zealand Powerlifting Championships in Auckland, where he bench pressed 81kg, breaking his own New Zealand record and qualifying for the World Masters and Oceania Championships.

Now, he wants to be the first person aged over 80 in the world to officially bench press 85kg.

“I had a go in Auckland but just missed,” he said. “I intend to get that at the world champs.”

“I was thinking it’d be nice to finish at the world champs,” he said. “But you never know.”

“When I was 54, four years after I’d retied from bodybuilding, I was diagnosed with diabetes and rheumatoid arthritis,” he said. “It was that bad we had a two-storey house and we had to sell that because I couldn’t get up the steps. As far as weights, I could only lift the bar. I had to start right back again from zero. I thought by the time I’m 60 I’ll be in a wheelchair. But by training and going to the specialist, who put me on some good medication, I managed to get well again. I never thought that I’d be starting to powerlift at the age of 70.”

It is the sheer joy of competing that has kept him involved in sport since he first took up bodybuilding at age 18.

“I weighed 63kg and I wanted to be bigger so I joined a gym and in nine months I went up to 83kg and had to buy new clothes.”

That year he came to New Zealand after meeting rugby fan Aubrey Brough, who was in South Africa supporting the All Blacks and offered him a shearing gig in the King Country. At 21, Doug left home with “nothing but a suitcase and £45”.

Shearing suited him well and he worked on farms around the country for the next decade before arriving in Cambridge in 1970. “But I’d married my wife Dawn in 1967 and we had two young children and I wasn’t able to spend much time with them, so I went to work at the Cambridge freezing works,” he said.

He later worked as a real estate agent before he and Dawn opened the town’s first gym, Body Culture, in 1982. They have since sold the gym, now named Cambridge Fitness Centre, but Doug still works out there three times a week and trains powerlifters for free. That was his route into the sport 10 years ago.

“I was working at the gym as a personal trainer and the owner asked me if I’d train a few boys who wanted to do powerlifting,” he said.

“I found out I was lifting as much as them, so I entered a contest when I was 70 and then I went to Sydney to the Oceania champs and I got Commonwealth records.”

Doug says the time to retire from top-level competition may be nearing, but he has one last record to knock off first.

“I was thinking it’d be nice to finish at the world champs,” he said. “But you never know.”