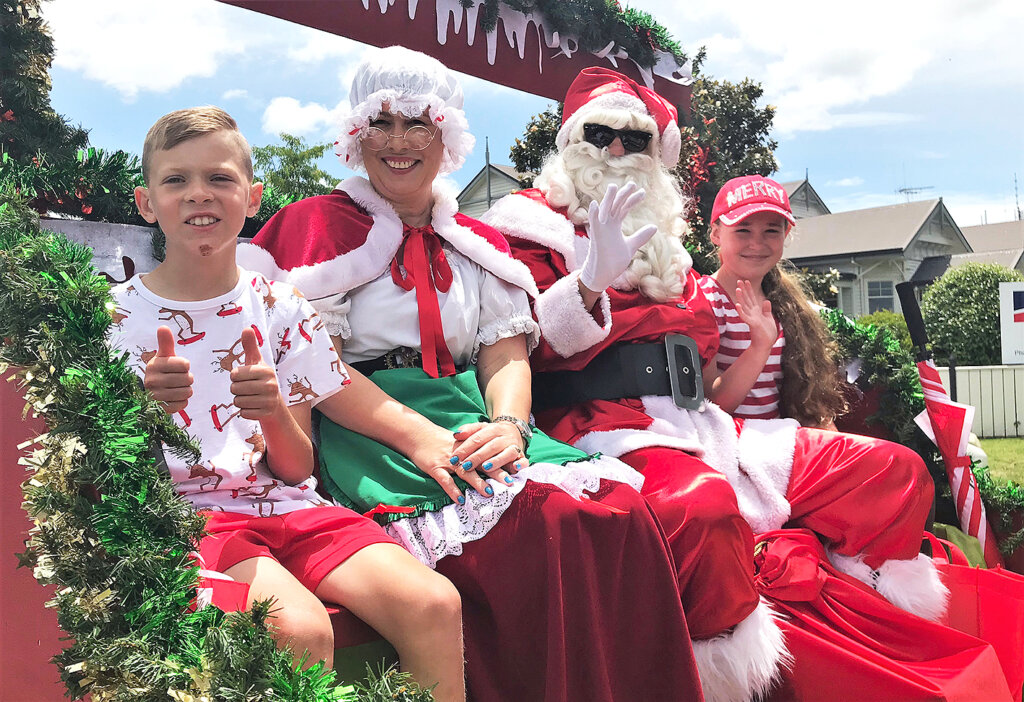 Colouring competition winners Alistair Stokes and Ellie Harfoot got to join Santa and Mrs Claus in their float during the parade.

Townsfolk came to the party on Sunday, turning out in high spirits to watch the 2020 New World Cambridge Christmas Parade give the colourful ‘finger’ to a challenging year.

There were 36 floats entered this year, with participants dressing to the 2020 theme of ‘A Storybook Christmas’. Of the 60 or so vehicles involved, about 16 came under the Stragglers entry, giving those lining the streets a glimpse into some stylish vehicles of an earlier era.

Logan and Nicola McKenzie, owner-operators of the parade’s main sponsor, New World Cambridge, said they were delighted with the support.  “I really want to give Cambridge a huge shout out … while we were a little down on entries this year, the townsfolk really came out in numbers,” said Logan.

Parade organisers, Cambridge i-SITE, thanked the many volunteers, participants and sponsors for making this year’s event one to remember. “While this year’s theme was ‘A Storybook Christmas’ we recognise that throughout the world, Covid-19 has led to many challenges for people, so we’re very grateful to have been able to run our parade and set the scene for a merry Christmas,” said i-SITE’s Vicki Ewing.

The winners of this year’s colouring competition were Alistair Stokes and Ellie Harfoot, who travelled the parade seated alongside Santa and Mrs Claus.