Past lessons should guide the road to predator free nz 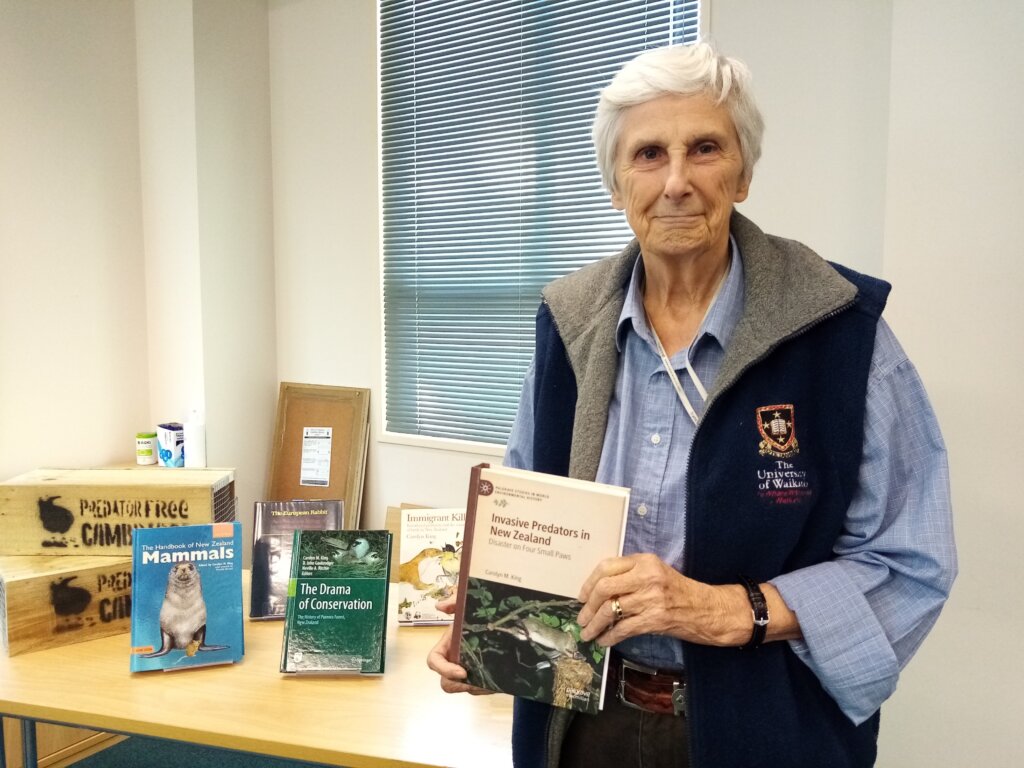 Professor Carolyn King at Cambridge Library with her recent publication, and some of her earlier books.

If New Zealand is to meet its Predator Free New Zealand 2050 goal, those involved must fully understand what has worked in the past to combat invasive pests, and what is working – or not working – today.

This was said last month by one of the country’s top ecologists, University of Waikato Adjunct Professor Carolyn King. She was addressing a public meeting at Cambridge Library where she spoke to her recently published book, ‘Invasive Predators in New Zealand – Disaster on Four Small Paws.’ The book covers the history of rats, stoats, ferrets and cats from 1280 AD to the present day and looks at how New Zealand’s current conservation issues evolved.

Professor King is an international authority on the biology of mustelids and rodents; she holds numerous awards for her work.

She said her book was aimed at those interested in New Zealand’s Predator Free vision, an initiative launched by then Prime Minister John Key in 2015 which focuses on the removal of rats, stoats and possums by 2050.

This was not New Zealand’s first attempt at eradicating predators, she said: “The first involved rabbits, in the late 19th century. They brought in at least 25 shipments of stoats and weasels to kill the rabbits, and over a period of about 30 years liberated some 75,000 of them in the South Island.  A lot died, but enough survived to cause immense trouble.  They thought they were doing the right thing with what they knew at the time … they started off with one problem, then ended up with two. The same thing happened in the 20th century when trying to control the effects stoats were having on takahe.”

Prof King said lessons should be learned from that history.  “If we are to make a success of Predator Free 2050, we must know what worked in the past, and what didn’t.   Pest species need to be tackled in unison if it is to work, as removing one species often results in an upsurge in numbers of another.”

She said 1080 had been shown to have great benefits to vulnerable populations if it was dropped frequently enough to break predators’ breeding cycles and prevent losing the advantage. It was important to remove predators at a faster rate than they could replace their own populations.

“I hate 1080 as much as the next person, but in the high country, it is the only thing that works on the scale we need,” she said.  “We simply have to keep using the weapon we have until we come up with something better.”

Moves to place endangered animals on offshore islands were also risky as many of the predator species were adept at swimming several kilometres in search of a new food source.

Her talk was followed by one from Karen Barlow of Predator Free Cambridge and Predator Free Hamilton.  At the end of the evening, she gave out 22 rat traps to those keen to get involved.