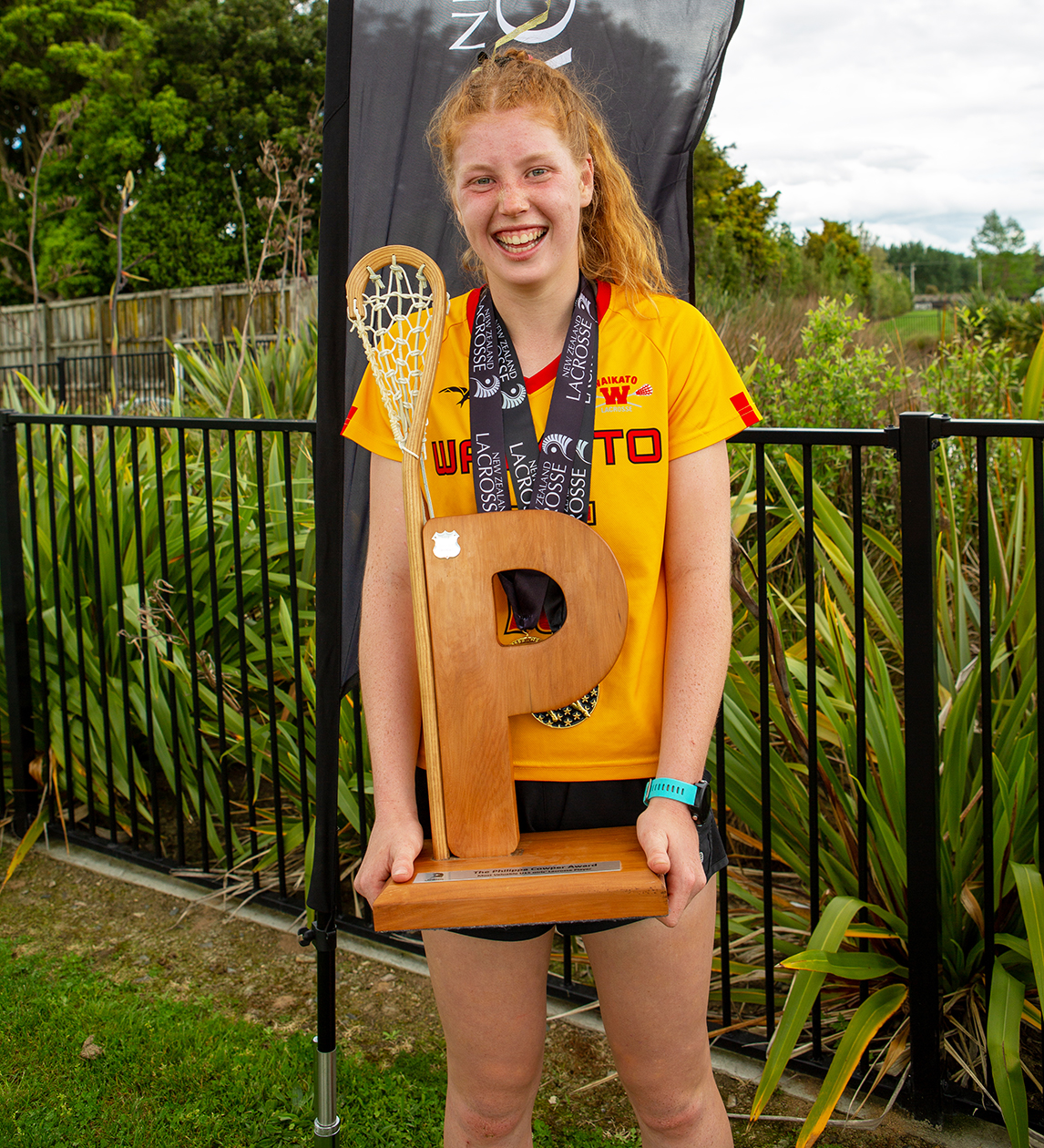 Aishlyn Lawton was awarded the Phillipa Cowper Award for Most Valuable Player at the national U15 National Tournament. Picture: Lou Kibby Photography.

In a rare double, Waikato teams won both the Girls and Boys New Zealand Lacrosse U15 National Championships at Tamahere Park.

Waikato sides also took silver medals in both Labour Weekend tournaments, with Auckland teams winning bronze. It was an exceptional outcome for the region, and testament to the depth of players at this level from the strong ongoing U15 development programme.

In the Girls’ tournament, it was the Waikato Gold team that won the Girls Championship 12-9 at the end of an epic tussle with their regional co-team Waikato Red. Cambridge High School students Aishlyn Lawton, Deanna Young, Lucy Kibby, and Sophie Laurent were players for the winning team.

“The standard from then to now is just unreal. These girls are U15 and I am just lost for words.” – Melissa Gratwicke

Melissa Gratwicke, coach for Waikato Gold, commented: “They were really hungry and gritty, and they just fought for everything. They weren’t giving anything, they really had to dig in. They started out, got behind and didn’t have a great start, but managed to dig in, pull it back, and take on a good lead.”

Gratwicke, who plays for Hartford University in the US on a full lacrosse scholarship added “I coached [for this tournament] three years ago in 2017, and the standard from then to now is just unreal. These girls are U15 and I am just lost for words. They are just so talented, and they work really, really hard for it as well.”

Particular recognition was given to Aishlyn Lawton (Waikato Gold) who was awarded the Phillipa Cowper Award for the Most Valuable U15 Player. Aishlyn is a Year 11 student at Cambridge High School and has represented Waikato as an U15 and U18 player.

Kris Nebeskӯ who oversaw the tournament said both Auckland and Waikato were putting in some good teams and playing very good lacrosse.

He said it was good to see Waikato finish the tournament with a win and “obviously being a Waikato native I take that to heart”.

“It’s a good victory for us. And awesome to see the development that we’ve got and seeing how everyone has progressed and getting better.”

The New Zealand U15 National Lacrosse Championships runs annually and alternates between the Waikato and Auckland. The tournament will return to Auckland in 2021.