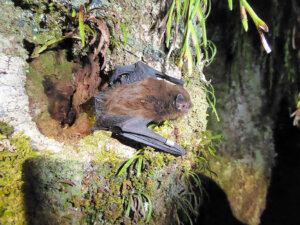 The pekapeka is one of two native bats surviving in New Zealand. Photo: DOC

Fonterra has gone into bat for one of New Zealand’s two native land mammals.

Long-tailed bats (pekapeka) are ‘nationally critical’ – the same status as the Kākapo – and are found in several spots around Waikato and Waipā, including in blue gums on the company owned Buxton farm in Fencourt Rd near Cambridge.

Company teams have consulted with local stakeholders including mana whenua Ngāti Hauā and Ngāti Korokī Kahukura, Waikato Regional Council and the Department of Conservation on how best to protect and enhance their habitat.

The project includes an animal pest control plan to help the breeding success of the bat population.

Funding received from the Sustainable Catchments programme will see around 4000 native trees planted during community planting days planned for 2021. The old Buxton farm dairy shed will be converted into a native plant nursery.

It is hoped the nursery will produce up to 100,000 plants a year – which will be used on Fonterra farms or sold externally.

“The team is really looking forward to getting involved and working with others in the community to help save the native bats, it’s important that we protect and enhance the area around the blue gum trees that they call home.”

Fonterra says the project to help save the pekapeka is a demonstration of its commitment to sustainability.

It says 79% of New Zealand’s native land vertebrates have been classified as threatened with or at risk of extinction.

The nursery will be formally opened with a blessing by Ngati Haua early next month.