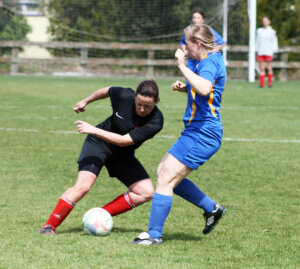 The measure of improvement by Cambridge’s women’s footballers this season was demonstrated by a well-earned 4-2 victory over Division Two champions Thames.

Though Cambridge went into last weekend’s game assured of runners-up spot, the challenge of playing the league winners provided an excellent test.

Thames got off to a fine start, taking the lead at John Kerkhof Park in the sixth minute.

Cambridge captain Steph Upton got her team back into contention in the 17th minute. Two minutes later, Upton provided the pass for Sophie Young to score from a simple tap in lead.

In the 34th minute, Cambridge goalkeeper Aimee Feingberg-Danieli made an excellent save to deny Thames from a free kick.

After turning around with 2-1 lead, Cambridge pushed forward from the kick off and were rewarded with a penalty that Marie O’Neill scored in the 47th minute.

Twenty minutes later, O’Neill all but clinched the result when she calmly slotted the ball past the Thames ‘keeper, after being played into space by strike partner Astrid Howarth.

It was O’Neill’s eighth goal of the season.

Cambridge were content to hold possession for the remainder of the half but still needed another full-length save by Feingberg-Danieli to maintain their margin.

With three minutes to go, Thames scored a consolation goal.

The Hill Homes Player of the Day was Lorena Herrera who contained Thames’ always-threatening lead striker.

After receiving their competition trophy from WaiBOP Football’s Catherine Clark, the Thames players were given a guard of honour by the Cambridge players as they left the pitch – a mark of respect that is traditional at Cambridge FC.

Cambridge’s women wrap up their season on Sunday October 4 (11am) when they host a visiting Northland team in an end-of-season friendly.

Meanwhile, all Cambridge’s men’s teams have completed their seasons except for the third team who have two away games still to play in the WaiBOP Championship.

That side extended their unbeaten run to six games with a thrilling 4-4 draw against Tauranga City last weekend.

Cambridge will rue the fact they had the chance to wrap up the game early, racing to a 3-0 lead at John Kerkhof Park.

As it was, they were forced to share the points when Tauranga found an equaliser in the last minute of play.

Striker Adam Brady opened the scoring for Cambridge in the 12th minute and Ryan Ashby doubled his side’s lead a few minutes later.

Brady made it 3-0 when he headed home in the 20th minute.

Tauranga stayed in contention, thanks to a goal from Curtis Warner on the half-hour.

Having turned around with Cambridge leading 3-1, the home side restored their three-goal margin when substitute Tom Gifford scored in the 49th minute.

Tauranga wouldn’t surrender and they fought back with goals from Jack Pateman (70’) and Connor Smyth (73’) before substitute George Brown grabbed the equaliser four minutes into added time.

Player of the Day for Cambridge was captain Sam Garmonsway.

Cambridge continue to lead Group B of the championship.

Entries are open for Cambridge’s annual 5-a-side Summer League which runs on Wednesday evenings from November 11 till February with a break over the holiday period. Details are available at www.cambridgefootball.co.nz.