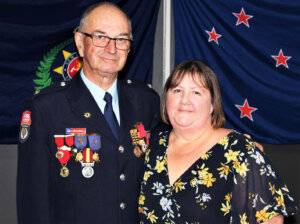 Murry Gillard’s 50 years as a firefighter have been were celebrated at a medal ceremony.

Over 160 people, including family, friends, several senior brigade personnel from around the region and more than 20 Brigade life members, marked Saturday’s occasion with congratulatory messages, stories, presentations and a cake designed as a large 50-year medal.

Te Awamutu Chief Fire Officer Ian Campbell told the gathering Murry joined the Brigade in January 1970 and had served all 50 years in Te Awamutu. His was the second 50-year Gold Star medal awarded to a member of the Te Awamutu Brigade – the first was to Barry Kimber in 2007.

He said that of around 14,000 firefighters, only about five percent achieve their Gold Star.

Fire and Emergency New Zealand (FENZ) Waikato Area Commander, Daryl Trim, represented the fire region and the FENZ Board. He presented Murry with the Waikato Area Statute and a FENZ Plaque.

On behalf of the Brigade life members, Rob Peters presented Murry with a timber engraving of a helmet with all the gold star holders’ names on the back. Addresses were given by both Taranaki-King Country MP Barbara Kuriger, and Waipā District Mayor Jim Mylchreest.

Murry said there were about 80 calls a year when he started, there were now over 350.

The ceremony is one of the rarest to be held within the service. It was ‘third time lucky’ for Murry after the presentation had to be cancelled twice before due to Covid-19.