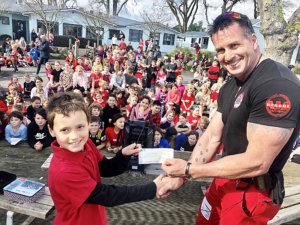 Ten-year-old Elliot Ismay organised a day of fun for his schoolmates last week that raised nearly $2500 for the Waikato Westpac Rescue Helicopter service.

The year six student teamed up with friends James Morgan, Daniel Hill and Marcus Tadema to create Goodwood School’s inaugural “Flight Festival” and was delighted with its success.

Students were invited to wear red and make a donation to take part in fun, flight-related activities such as bottle rocket launching and paper plane competitions.

There were also three VIP tours of the Westpac rescue helicopter base raffled thanks to Elliot’s friend Bill McNeilly, who took part in the day.

“My dad had a collapsed lung, so I visited him lots and I liked looking at the rescue helicopters taking off and landing while I was there,” Elliot said. “I got really interested in them.”

As a birthday surprise, his mother Nicky arranged for him to tour the hospital hangar.

“I met two crew, one of which, Bill, offered to come to my school to talk about his job,” Elliot said.

Elliot was so inspired by Bill’s talk he decided to create the Flight Day fundraiser.

The school community raised $1478 and Elliot’s father’s employers, Ken and Julie McKenzie from engineering company Innerscape, chipped in another $1000.

“I’d like to say a really big thanks to everybody for supporting the festival and making it happen, including Innerscape Cambridge for making an amazing donation,” Elliot said.

Goodwood School principal David Graham said he was impressed by the initiative shown by Elliot and his friends.

“Our school vision is all about curiosity, caring, connection and making a difference and this is a perfect example of our vision in action,” he said.