Another scalp for Covid 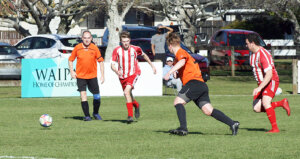 The season is over for Cambridge’s Reds after the cancellation of football’s Northern League.

Continuing restrictions on crowd sizes in Auckland has hindered the competition and administrators have called an early end, with the Reds having played only eight of their planned 16 matches.

That means Cambridge FC have only two teams left in action – their WaiBOP Championship men’s team and their women’s side.

In the WaiBOP Championship, Cambridge cruised to a 6-0 victory against Waikato Unicol last weekend to extend their unbeaten run to five.

After a scoreless first half, Cambridge hit their straps in the second spell finding the net through six different goalscorers.

The win increased Cambridge’s lead to seven points in the B section of the Championship.

In the Waikato Women’s second division, a penalty save by goalkeeper Aimee Feingberg-Danieli earned Cambridge a 1-1 draw at Te Awamutu and made sure the team finishes runners-up in this year’s competition.

Cambridge took the lead after 16 minutes when captain Steph Upton found space and struck a sweet shot from 20 metres.

A minute before half-time, Te Awamutu equalised to send the teams into the break at 1-1.

The second half was evenly balanced but the home side appeared to have the advantage when awarded a penalty.

In the Waikato Men’s Division Two, third-placed Cambridge concluded their season with a chance to disrupt the perfect record of competition winners Hamilton Wanderers who had won all their competition games this year.
It was 2-2 at the break, but Wanders wrapped up the points in the second half.