Ayres and graces: the tale of the accidental poet 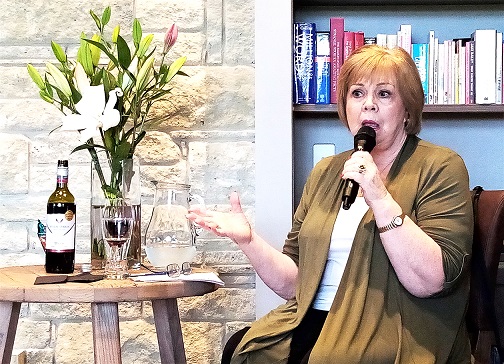 “An L-plate poet who thought she knew nowt,

Penned a few words while not allowed out.

Were then picked to raise funds for those easing the pain.”

An ‘accidental’ poet whose lockdown verse went viral on social media and won her a place in an international poetry book has been in Waipā for a special reading.

Jan Beaumont fronted a late-June poetry reading at Cambridge Oaks.  She kicked it off by reading, ‘Let’s All Drink to Lockdown’, a work that marked the start of her poetry career in March this year and was responsible for both global recognition and an early speedbump that confused her with British comedian and gem of verse, Pam Ayres MBE.

The journey started when Jan’s daughter suggested she upload ‘Let’s All Drink to Lockdown’ to social media. People loved and re-posted it in droves, but somewhere along the way the name of its author dropped out. One appreciative reader thought it sounded like a Pam Ayres piece, an assumption that led to a radio station approaching Pam Ayres’ husband/manager Dudley Russell to arrange an on-air interview.

“I got a message from the PR person in my retirement village that the BBC wanted to interview me. It turned out they had been in touch with Dudley, who told them it wasn’t a Pam Ayres poem, and they eventually tracked me down,” Jan laughed. “I couldn’t hold a candle to Pam Ayres … she’s brilliant.”

Jan went on to write a host of poems during lockdown, all of which generated an international clamour for more.  She has been interviewed by radio stations in the United Kingdom and Australia, and more recently here in New Zealand, and the speaking engagements are beginning to come in; she will be back in Waipā soon for a talk to the 60s Up group and the Cambridge Lions.

Much to Jan’s delight, they are also being used to help others. She sent several audio recordings of her poems to aid fundraising for Sight for Wight, an organisation for the blind and visually impaired in the Isle of Wight, and she heard recently that her first poem was selected to be among 100 international poems selected for a book called ‘Poems for a Pandemic’, which is being sold online to raise funds for the NHS in the UK.

Now an Auckland resident in her 70s, Jan has lived in several countries around the world. Her poetry reflects day-to-day life, with nuggets drawn from her work as a legal secretary, running a cooking school, running her own radio show, writing a newspaper column and working in the funeral industry.

She wrote a poem recently about Ashley Bloomfield and David Clark entitled ‘May the Best Man Win’. Unsurprisingly, it’s going off pop online. Those keen to see more can visit her work at Jan Beaumont Poetry on Facebook.