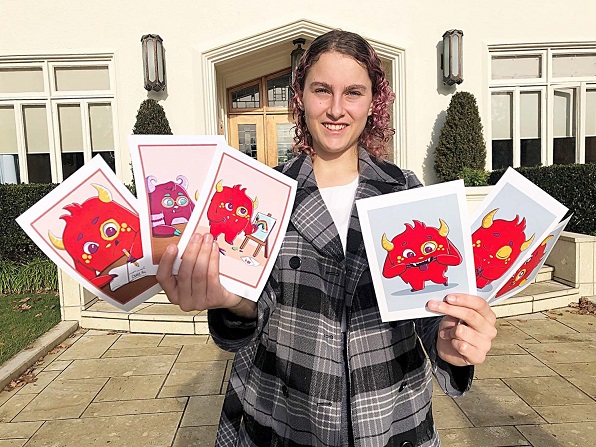 For six hours it wouldn’t stop.

The 18-year-old former St Peter’s School Cambridge student had previously mentioned “random twitching” she occasionally experienced to doctors – nothing came of those conversations.

After that experience though, she and mother Renee wanted to know what was happening.

The result was most unexpected – doctors confirmed the cause was Tourette Syndrome.

Candidly, Sian said the diagnosis three years ago brought with it a loss of identity she found hard to cope with.

“It turned my world upside down – it basically came on overnight.”

Tourette Syndrome is a type of neurological disorder characterised by involuntary motor and vocal tics categorised as either simple or complex.

Both Sian’s motor and vocal tics are complex.

A common motor tic Sian experiences is her legs suddenly giving out.

Her most common vocal tics include asking “nonsensical” questions, experiencing outbursts ranging from one word to full sentences and imitating other people’s words or sounds she hears.

She’s tried fighting tics, which she said is most akin to holding one’s breath.

“You can only fight it for so long,” she said.

“Whenever I try, eventually my brain takes over and they come back stronger.”

Some days are better than others.

“When I have lots of tics I feel so drained.

“I apologise to people after I have one too, so they know it was a tic. I try to make people laugh too, maybe that helps.”

Shortly after Sian was diagnosed, she and Renee heard about Camp Twitch – the Tourette’s Association of New Zealand’s annual gathering for those living with Tourette Syndrome and their families.

“That was very helpful.

“It gave us useful tools and advice about what living with Tourette’s would involve,” Renee said.

To cope with the challenges of living with Tourette’s, Sian has found solace in music, humour and – particularly – art.

Her quip “I used to be able to carry eggs into the kitchen, no worries.

“Now though, that activity carries with it a great deal of danger,” an example of her fun-loving nature.

“It’s very entertaining living with her at times,” Renee said.

“When I get lost in the art and design world though, amazingly, tics don’t happen,” Sian said.

On that front, a unique opportunity presented itself during the last six months of 2019.

As part of St Peter’s School’s wellbeing curriculum, deputy principals Yevette Williams and Jess Patrick had an idea to develop a wellbeing tool parents and teachers could use to help them have conversations with children around emotions, then come up with positive solutions or next steps.

Knowing of her passion, they brought Sian on board to design and illustrate the cards, which represent a variety of emotions from sad or happy, to worried or anxious.

Children use the cards in conversation to help them express how they’re feeling.

“Sometimes, it’s really difficult to have these conversations with younger children – these cards will help,” Jess said.

“But Sian said the most amazing thing – monsters don’t have to be scary, neither do conversations around wellbeing.”

The first 100 Monster Conversations packs released about a fortnight ago are nearly all already accounted for.

“We’re so happy this is getting out there. Our goal is for every school in New Zealand to have one,” Jess said.

For every pack sold, Sian receives a percentage and funds are donated to the Tourette’s Association of New Zealand.

“Jess and Yevette and all the staff were so amazing when it came to my wellbeing at school, so now I’m happy to use my skills to help others in a similar position. Monster Conversations is a fantastic way of doing that,” Sian said.

Meanwhile for the past year – half of which has included her Monster Conversations work – a film crew has been documenting Sian’s daily life living with Tourette’s.

The finished documentary – part of the third season of a programme called Living With Tourette’s – will air on Prime Television next month.

For more information, or to purchase cards, email [email protected]