The tallest tale in Waipā This image hangs on the wall in Murray’s home.

If you ask Murray Smith about it, he’s a little reticent.

“It’s a bit of a sad ‘claim to fame’ really isn’t it? I just really love giraffes.”

And there’s your hint as to what few would know about him.

In his “younger days” Murray, perhaps now either more known to many as Bridges Church’s senior leader in Cambridge or one of the News’ columnists, was a graphic artist.

In that field – which he worked in for 25 years – Murray had a unique opportunity come across his desk.

While running his own business as a free-lance designer, based at a design agency in Auckland, he drew what is now likely a New Zealand icon – the Longest Drink In Town giraffe known as Toby.

The Longest Drink In Town Facebook page in fact states since his inception Toby has graced the sides of over 120 million cups.

Murray said he initially designed the cup for a company called Lily Cup, which no longer trades.

“It’s a bit of a sad ‘claim to fame’ really isn’t it? I just really love giraffes.”

In his mind though, the cup – which he drew in the late 1970s – and its early days are far more straight forward and less perhaps “steeped in folklore” than some may suggest.

“It’s quite normal in the design world. A client came in with a one-off paid job wanting a concept to represent their milkshake cup.

“Ultimately, that’s what they chose.”

What other ideas did he have?

“With the ‘Longest Drink In Town’ concept, there was only ever the giraffe.”

As part of the brief though, around the idea of milkshakes being a summer drink, Murray also drew a sun wearing sunglasses with the slogan ‘The Coolest Drink In Town’.

And no, he doesn’t get royalties when each cup featuring Toby is sold. 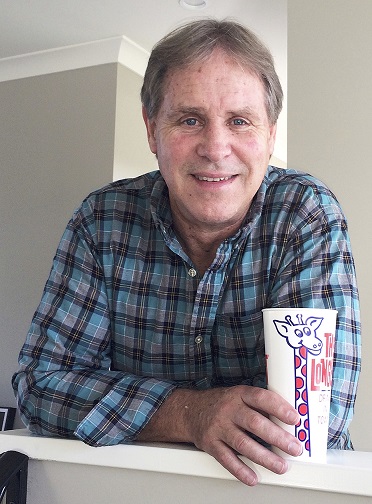 Murray Smith with the Longest Drink In Town cup as it looks today.

Interestingly though, Toby’s initial colourway was orange and purple – these days he’s red, white and blue.

“There’s aspects I miss about the design industry, sure,” Murray said.

“Like the variety – working on everything from packaging to brochures, anything to do with print really.”

So, what’s it like getting a milkshake in a cup you designed?

“Honestly, I don’t think about it much. It’s just something that’s there in my past that’s a little quirky.

“Giraffes are my favourite animal though, just because they’re a bit of an oddity. Have you ever watched them drinking water? The way they have to awkwardly move their front legs and then stoop down.”

While Murray conceded the cup might now be “up there” as a New Zealand icon, he reckons it’s “not quite on the level of the buzzy bee or anything”.

“To me, it’s surprising the cup has been so enduring.”