Life in our sister cities

The translation is “Thanks to our [medical] heroes. Help them, stay at home.”

The banner is a signal of support to those fighting the Covid-19 pandemic: something that – just over 100 years from the Great War – is a shared enemy to the people of Cambridge and Le Quesnoy.

The two towns, declared “sister cities” in 1999, are both experiencing major disruptions to daily life as a result of Covid-19.

The sister cities link between the Cambridge and Le Quesnoy commemorates the liberation of the French town by New Zealand troops on November 4, 1918. It was a crucial Allied victory in the war.

Eight days before New Zealand shut up shop, the French had imposed a nation-wide lockdown.

In Le Quesnoy, Mayor, Marie-Sophie Lesne wrote to residents on March 19, reminding them that public places would be closed – including the “ramparts” that surround and characterise the town. It’s important to respect the new “measures de confinement,” Lesne wrote.

“When the NZ Brigade liberated Le Quesnoy from German occupation in 1918, the first soldier over the top of the ladder and the ramparts was a man born in Cambridge while his father was Vicar of St. Andrews,” Cambridge Community Board Chairperson Sue Milner said. 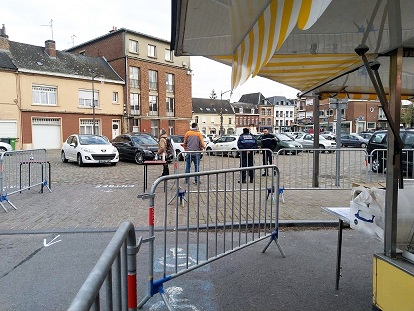 While both Waipā and Le Quesnoy are living under similar lockdowns, Covid-19 is likely an even scarier concept for the French.

Local media reports spotlight two recent cases of people being admitted to hospital because of Covid-19.
A Quertician woman was admitted with “urgency” to the Valenciennes Hospital in Belgium on April 6 – her symptoms confirmed.

The second case was probable, with one resident sharing “her story” after apparently catching the virus. Talking of “difficulty breathing”, the “Living in Le Quesnoy” Facebook page recounted her symptoms.

While the Waikato is home to hot-spots, the closest Covid-19 has officially got to Cambridge is a scare at the Avantidrome on March 18, when the facility was closed due to a person showing symptoms of coronavirus.

Some things Le Quesnoy is going through though – like the shared lockdowns – will be more familiar to Kiwis.
Milner – who maintains contacts between the towns – said “much like New Zealand there are very few businesses able to be trading … butchers, bakers, and grocers.”

And there’s plenty of ‘citizen police’ over there, too. “The Le Quesnoy Facebook page is certainly getting complaints about some businesses being open when they shouldn’t be.”

The online debates of “Querticians” are certainly equally lively; after the Mayor made the decision to continue holding the market – with strict social distancing measures in place – residents exchanged barbs over the health benefits of open-air markets versus supermarkets.

And though the Cambridge and Te Awamutu News couldn’t confirm that the popular Teddy Bear Hunt trend had reached Le Quesnoy, there have certainly been many instances of kindness and solidarity between citizens.

Residents were urged to take part in nightly “clapping” to show thanks to the region’s health workers.

And when the Mayor called in late March for Le Quesnoy-based “seamstresses” to make protective masks to stem a PPE shortage facing health workers, she received over 100 replies offering to help.

The Mayor also called for a “chain of solidarity” to help the town’s elderly and vulnerable. When people had “no other option,” Mayoral staff would be available to shepherd residents to the supermarkets, she said.

Some aspects of the lockdown in Le Quesnoy are more foreign, however.

While there are similar restrictions on movement – travelling to essential workplaces, short exercise and healthcare are the main exceptions to the “Stay at home” rule – residents have to fill out a “Attestation de déplacement dérogatoire” or “Certificate of exemption” to make such trips.

If residents are caught without the certificates, they can face a ‎€135 fine.

Many French towns have become used to shutdowns in recent years – with strikes and the infamous “Gillet Jaunes” protest causing frequent disruptions to daily life.

Like Cambridge and Te Awamutu, Le Quesnoy is in one of its country’s most affected regions. In the Haute-de-France region of France, where Le Quesnoy is, 2444 cases of the virus were confirmed by April 4, with 806 deaths. Le Quesnoy’s region is the fifth most affected by the virus in France, out of 18.

Any local tourism has also been cut off due to Covid-19 travel restrictions. Interestingly, 200 of the 800 tourists who typically visit the town each year are Kiwis, according to the French Embassy.

Cambridge also shares a sister city relationship with one other town – Bihoro in the Hokkaido region of Japan.
A sister city agreement between Cambridge and Bihoro was signed in 1997 – and a Japanese garden outside the Cambridge Waipā District Library commemorates the link.

Bihoro, unlike Le Quesnoy, is not living through an official national lockdown, though a recent Hokkaido-wide state of emergency closed schools and allowed police to urge people to stay home.

On April 5, 194 infections had been confirmed in the Hokkaido prefecture, making Hokkaido the most affected region in Japan.

Despite this, on March 19 the state of emergency was lifted after the island’s Governor said he was confident that enough medical beds would be available.

In her letter to “Quercitains” – the people of Le Quesnoy – Mayor Lesne had a message of support. “Even if the roads of our town are deserted … we are united,” she wrote.