Cricketers build on their innings Work on a $300,000 pavilion upgrade at Cambridge Cricket Club is finally set in stone – or so far concrete.

The first sod was turned for the project – about 10 years in the making – just before the lockdown came into play.

But beforehand, work had progressed as far as laying the concrete pad for the new additions to the facility.

The footprint of the completed pavilion on Victoria Square will be about twice its current size.

Within the upgrade to the two-storey facility there are plans to add a second changing room, a commercial kitchen and additional public toilets.

The current upstairs lounge can fit about 40 people – the upgrade will increase capacity to up to 100.

Cambridge Cricket Club president Simon Dodds told the News he was delighted to now at least have the ball rolling.

And the work couldn’t come soon enough, because the club is booming.

Additionally, the club regularly fields requests from other teams wanting to play there. 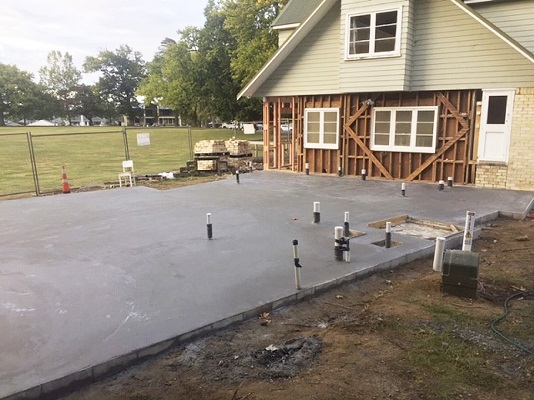 Concrete is laid prior to lockdown. Photo: Supplied

“It gets a lot of attention,” Simon, who has played cricket in Cambridge for 20 years and been club president for about seven of those, said.

“It really is a beautiful setting and many people have told us it actually reminds them of some of the cricket grounds in England.”

The long-term nature of the project, even to date, has meant the club had been “getting used to holdups in a way.”

But Simon was excited by where they were at now.

“We were pretty happy to get the 10 or so days of work in that we managed to get completed before the lockdown.”
The money for the pavilion project came from a combination of grants and donations and Waipā District Council also provided some funds.

Given recent events, Simon was unsure of an exact completion date, but when it is finished he hopes the new “multi-purpose” pavilion would attract some community use as well.

The current pavilion, which was “maybe getting a little bit outdated” will also receive a new paint job and finish.

Set in its now well-known Victoria Square location, the lower floor of the existing pavilion has been there since 1956 – the upstairs lounge was added in 1980.

The junior games are played at cricket pitches at John Kerkhof Park in Vogel St.

“As I see it,” Simon said, “cricket in Cambridge is already very strong and the new pavilion is going to be vital for the future of the game here.”