Church gets back in tune 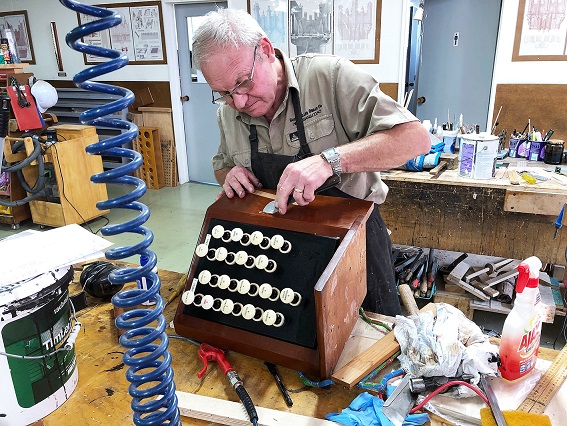 But when normality returns, Vicar Malcolm French hopes work on the ‘key’ feature will continue and the church will play to its own – unique sounding – tune.

Cambridge News first reported about 18 months ago that funds were being raised to start work on a plan – then projected to cost about $32,000 – to both restore, and modernise elements of the church’s organ.

A donation from a charitable trust enabled the scope of the project to expand to include a new transmission system and additional pipes.

The cost of the broadened project became about $150,000 over two years.

The church’s more than 120-year-old organ was built in the 1880s by New Zealand’s first organ builder, George Croft.

It was third organ he built in the country but one of the other two was destroyed by fire – the other was dismantled, its parts scattered “all over the place”.

The work includes a thorough clean of the existing pipes, adding more of them, updating the unit’s console and adding technology which will see it become “quite an up to date” digital system.

“We’ll have a layer of capabilities we just haven’t had before”.

The organ was initially built with more than 300 pipes and over time these have been added to.

While more than 1500 that are in place today, most of the original 1880s pipes are still there.

“These pipes range in size from about eight feet to the size of a drinking straw,” Father French said.

He added he thinks the last time the church refurbished the organ to this extent was in the 1960s, and he was excited about what the “moveable feast” of a project will mean for the church when it could eventually be finished.

“We’ll have a layer of capabilities we just haven’t had before”.

The last recital at the church before the organ’s console went away for work was held in February.

“We’ve literally had to put them into place and leave them there,” Father French said.

The broader project was made possible in part through a donation from a charitable trust.

When the finished product is unveiled – hopefully with a recital – Father French said he wants to do something to thank Basil and Cynthia Hewett – a brother and sister who established the trust as their community legacy.