It has been 30 years since Waipa District Council was formed in 1989 with the nationwide amalgamation of 850 borough and county councils into 86 district councils.

Councils have come a long way since, “and for the better too,” said Wayne Allan, Waipa’s group manager and one of the “originals” from the ’89 founding team at Waipa District Council.

“It was difficult, it was a bit of a nightmare actually,” said Allan, remembering the year-and-a-half of referring to six different district schemes to administer council rules before the 1991 Resource Management Act ushered in a new district plan for Waipa.

The new structure opened new doors, he said, enabling Cambridge’s now-exponential growth because the former borough councils were limited to how far the town could grow.

“Growth was stunted by this Cambridge borough boundary,” he said. “So with the new district, that artificial boundary was gone and the new local government was much wider.” 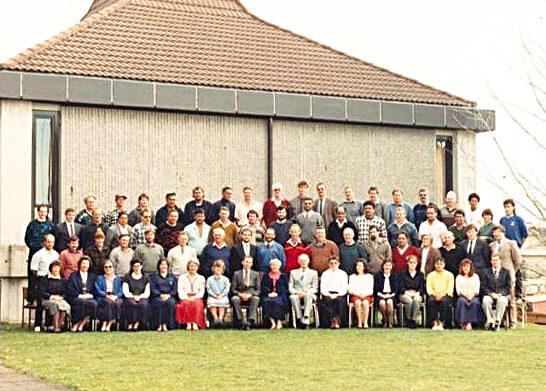 An all-of-staff photo taken when Waipa District Council was officially formed in 1989.

They’ve planned for new growth cells to the north and west of Cambridge since then, and expect to see residential and industrial developments established in those areas over the next few years – in fact building some of those projects has already begun.

Waipa as a district has unified too.

“Initially you had those tensions between Te Awamutu and Cambridge but all those have gone now,” said Allan, referring to the former Cambridge – Te Awamutu relationship akin to that of Australia and New Zealand. Looking toward the next 30 years, he hoped to see Cambridge keep its young people “so that we don’t just end up with a lot of retirement villages,” he said, pointing to the industrial and residential growth plans as a means to support that demographic.

“I see a continuation of strong residential growth underpinned by good planning, and trying to maintain the Cambridge character. … And maintaining this as a place of sporting excellence and the Home of Champions, not only sporting champions but everyone in the community being champions of what they do.”

“That’s what I really enjoy about the job, we’re helping shape the future of growth and development around the district.”

He likened Waipa’s 53,000 strong population as a “sweet spot” for local government to have a stable economic footing, yet still be small enough to respond effectively to its communities.

“Hopefully we’ll see many more really good decisions made by our elected representatives that provide for our future generations.”