Strike for climate a quiet affair 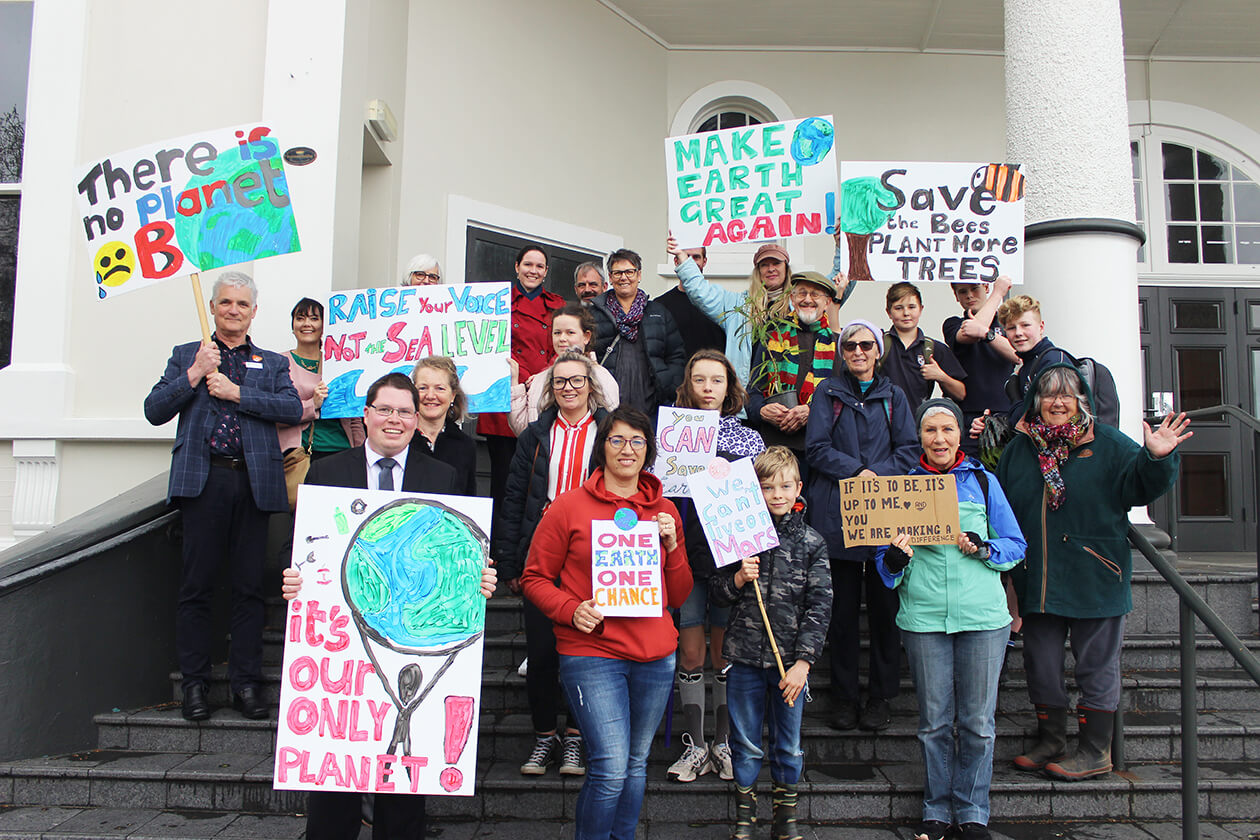 A small but passionate group of two dozen people turned out for the Global Climate Strike in Cambridge.

Just half a dozen students and eighteen adults turned out to the School Strike 4 Climate event in Cambridge last Friday.

The event, organised by the Only Planet Charitable Trust, was held in conjunction with the Schools Strike 4 Climate events happening around the country.

Thousands gathered in main centres around the country and a sister event in Hamilton attracted 1500 supporters into the city.

Only Planet trustee Peter Matthews said he knew more people had planned to attend, but understood why they didn’t make it.

“It’s pouring with rain, people have businesses to run, pay cheques to earn, and I can understand why they don’t turn up. Which makes it all the more important to commend the people who have,” he said. “Those who did turn out should be congratulated and commended. 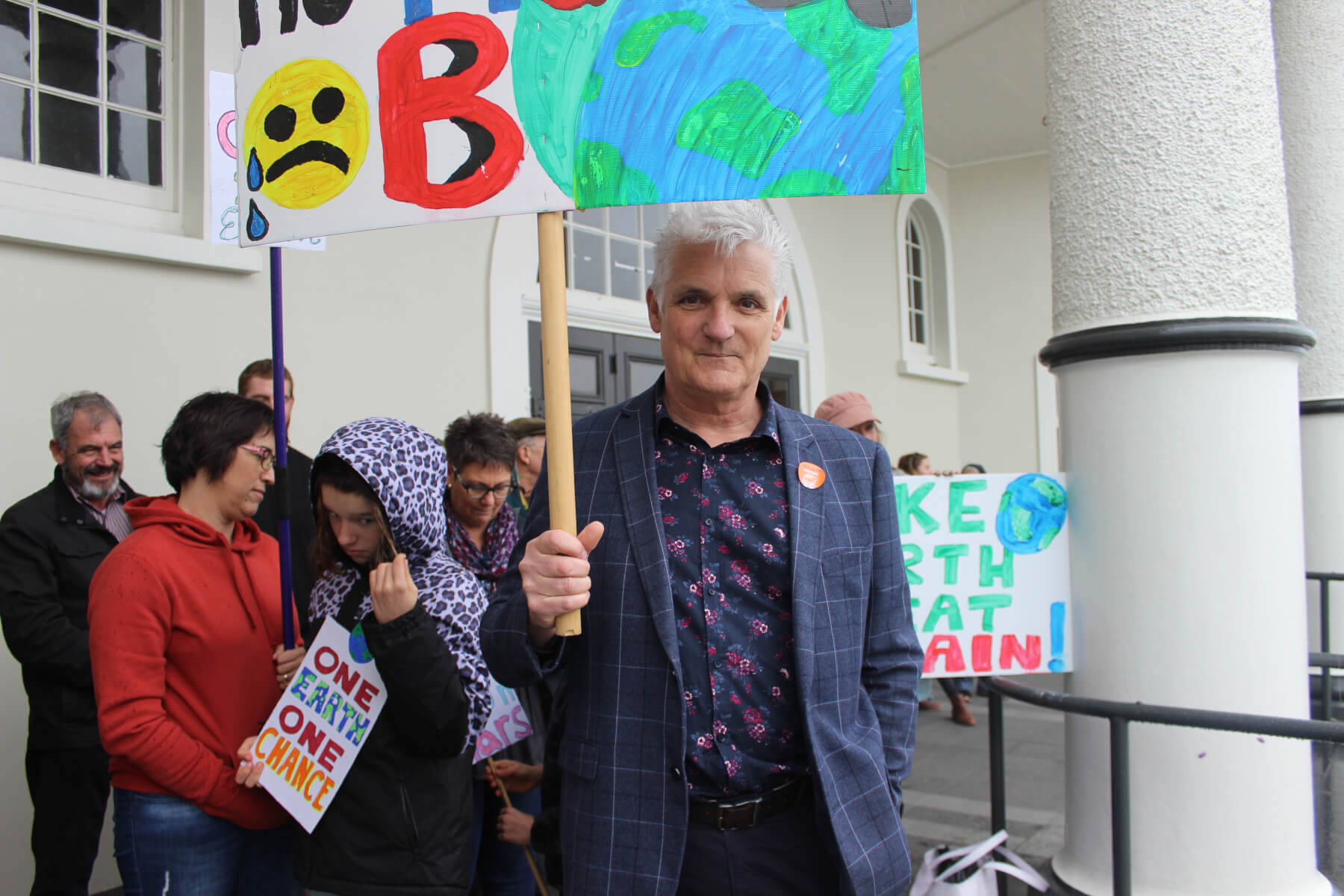 Peter Matthews with a picket sign cleverly crafted by his daughter Charlotte, 10.

“I just hope that the proportion of the number of people who turned up, in comparison to the population of the region, I really hope that that’s not indicative of the level of support that this issue has in the community, because that would be disastrous.”

“The amount of people who actually came is pretty good,” said Chris, considering the events planned in Hamilton and the state of the weather. “There may not be heaps of people here but there will be in Hamilton.” 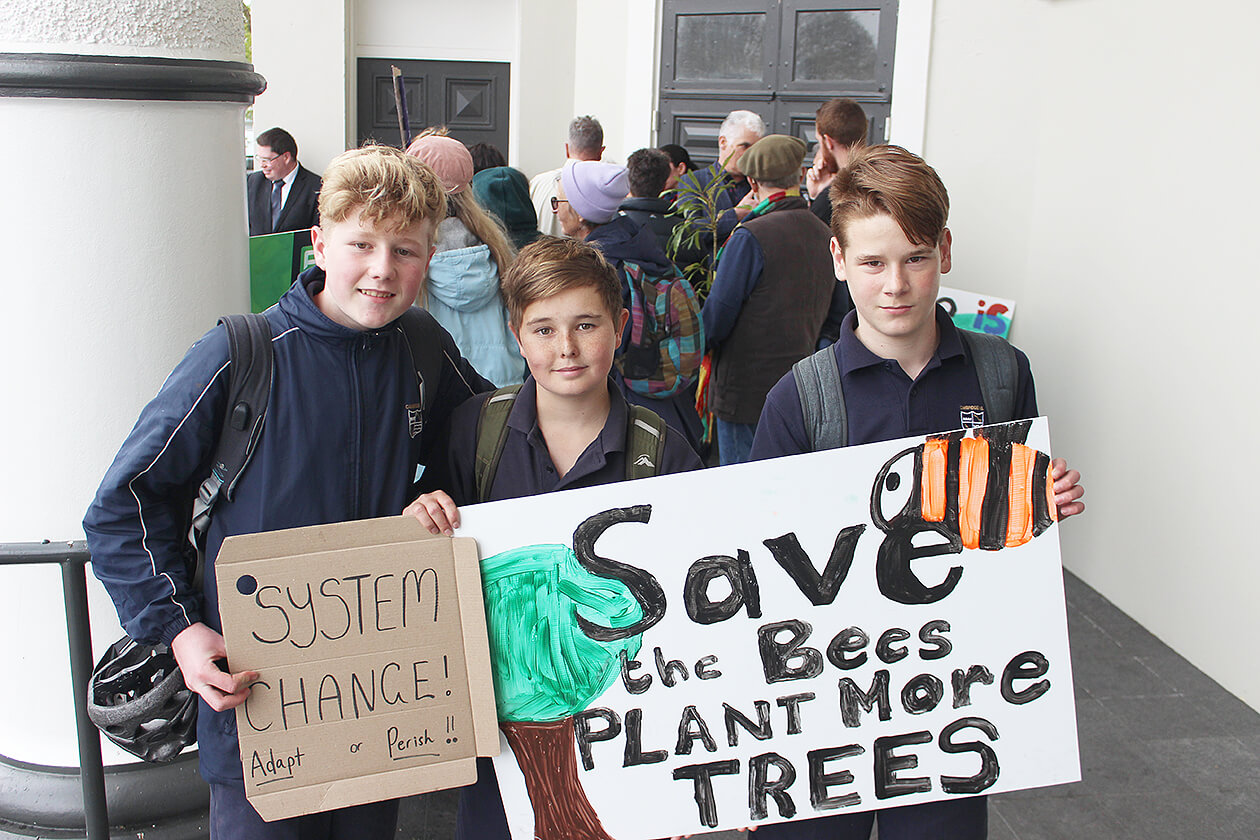 Cody Bargh, Chris Goonan and Roan Vanzyl hoped their message would be heard.

“I think it’s a good turn out,” Cody added. “It’s good that everybody is getting together and actually doing something about it… We’re running out of time.”

With one person mentioning the science of core samples – which show that the change in climate is part of a natural earth cycle – the boys agreed that was most likely a fact. “I think (earth warming) has happened before, but we’re making it worse by what we’re doing,” said Cody.

“A lot of people don’t know that our planet’s dying because of things we’re doing,” Roan said.

Several adults, angry at their own generation for inaction, joined the school students demanding action on climate change in the Hamilton CBD.

Student organiser Joe Dillon, from CHS, used a megaphone to tell the crowd that the time to ask quietly for change had passed.

“Without an aim and without demands, this (strike) is just an excuse to wag,” he said. He said it would be the last climate strike he’d organise in Hamilton, with plans to soon move to Wellington.

“I think it went excellently, with around 700 more people that expected, this was an absolutely amazing surprise,” he said.

“All in all, I think it’s the best I could have hoped for for the last climate strike I organise in Hamilton.”

Nationwide, around 170,000 people took part in protest events with another 290 businesses closing for the day. Strikes were held in 45 towns and cities with over 80,000 attending the Auckland strike, and 40,000 gathering in Wellington. It amounted to roughly 3.5 percent of the population taking the streets.

The School Strike 4 Climate national body said strike events would continue to be planned until meaningful action was taken. At the Hamilton protest, demands included declaring a climate emergency, ending the exploration and extraction of fossil fuels, and becoming carbon neutral by 2035.