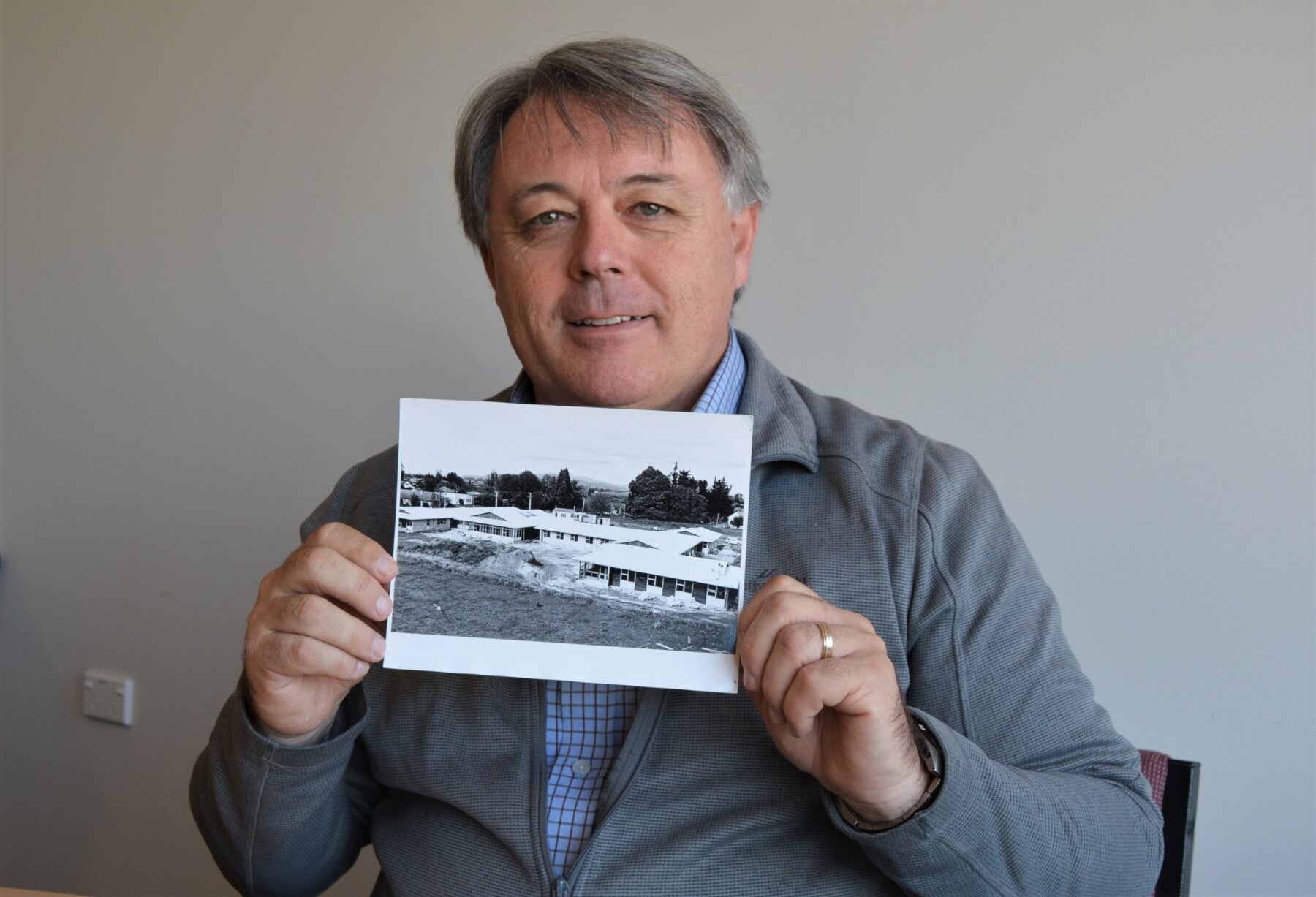 Cambridge Resthaven CEO David Hall with an old photograph featuring most of the area set to be replaced.

Cambridge Resthaven is on the brink of a new development phase designed to future proof the facility  and ensure it delivers  quality care for the next  few decades.

Plans are  advanced for a complete replacement of the complex’s resthome care centre. Resource consent applications are expected to be approved within the next couple of months.

“Realistically, this is a project that will go on for at least a couple of years. We are planning the construction in phases and will be mindful of residents’ needs as we go through each one,” he said. “We will ensure that our residents are well looked after throughout the entire process.”

The project grew out of Board discussions around ‘where to next’ following the successful completion of Resthaven’s ‘Views on Vogel’.

The resthome section, which fronts on to Vogel St, is the oldest part of the Resthaven complex, said Hall.

“It’s the original part of Resthaven, completed in 1972. It’s a little bit dated for today’s requirements, with single rooms and shared bathroom facilities. That model has had its day … we need to move with the times, and the demands of a different market.”

He said the generation that moved into the complex over the past 40 or so years ago had different expectations from those of today’s seniors. En-suite facilities were rare in their own homes, and there was an acceptance of ‘take what you can get’, particularly when it was from the government.

“Now, however, the baby boomers are starting to trickle in … and they come with different expectations. They want bigger rooms with en-suites, and they expect a better quality that includes full insulation. We need to be ahead of that.”

Initial thoughts to do an upgrade were scrapped for economic reasons, he said. The cost of building from scratch – complete with full insulation, double glazing, and heat pumps – was lower than it would be to upgrade the existing block to the same level.

Running parallel with the build are proposals to look more closely at the service model intended for the new resthome.

The established model was institutional in terms of style, Hall said, closer to the hospital model.  “We want to turn that on its head, to take the ‘institutionalised’ aspect out of it. We want to be able to create an environment where residents live as they would in their own home, but with the expected level of care available. It’s going to be innovative … it will present its challenges, but we want to empower people to consider the resthome as their home.”

International changes to the aged care sector are also being taken into consideration.

Hall said the new complex would likely double the number of residents it currently accommodated. There will also be a new dining area, common areas, recreational areas, and possibly a café.