As if it didn’t already stand out enough, the Cambridge High School boys behind the monowheel entry decided to paint it pink and orange.

All four of Cambridge High School’s entries into the EVolocity electric vehicle competition turned up and competed at race day at the Tamahere Kartsport track on Saturday – an achievement in itself, their supervising Materials Tech Engineering teacher Bruce Siriett said.

“To design and make the vehicles and have them perform on the day is a real accomplishment,” he said. “Most of them didn’t compete to win, they were there to have a good time and they definitely did that.”

Though the Cambridge students didn’t take home any titles this year in the secondary school competition – which challenges students to make a cart or bike powered by an electric motor – they all finished on time and got the chance to apply their skills to a real-life context.

“It’s a real situation for them, working in a team on a big project with a definite deadline,” said Bruce. “There’s quite a lot of panic in the last week of building.”

The students had been working on their vehicles since Term 2, provided only with an EV battery and motor from the competition organisers. Some used old bike frames while others made their vehicles from scratch, their only pre-manufactured items being the wheels, brakes and a seat.

The three-man team of Keaton Mackenzie, Drew Baldwin and Matthew McHugh decided to set themselves apart from the rest of the competition this year – being the only mono-wheel entry. They made the wheel themselves too – with the help of Professional Farm Services in Cambridge. 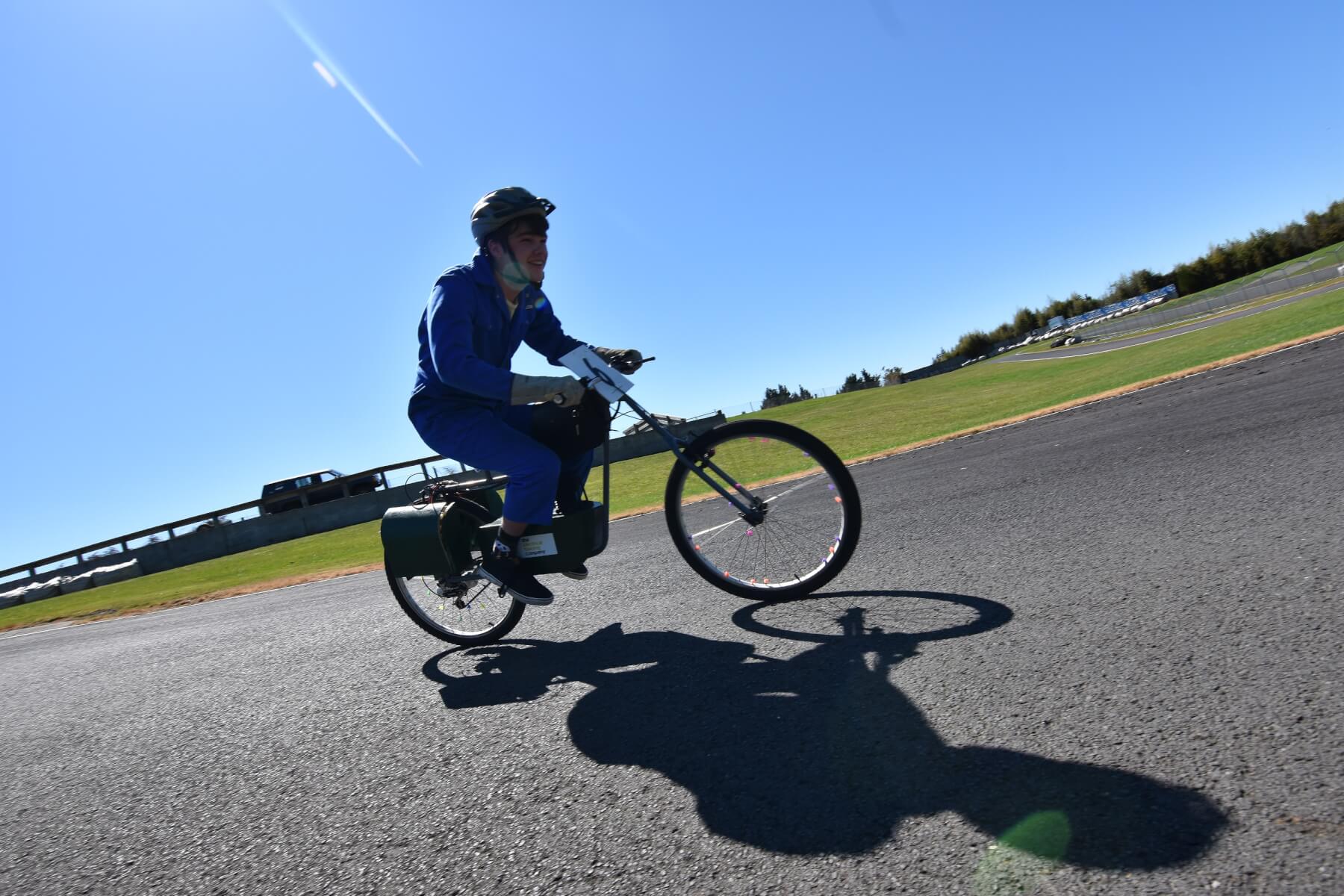 “We thought, let’s be a bit different, so we did some research into what we could build and we came up with that,” head boy Matthew said.

“There was a fair bit of balance control needed,” Drew admitted. “But it functioned and we competed. It actually took the corners quite well.”

“We knew it wasn’t going to top any of the competition tests. We were just stoked it made it that far!” said Matthew.

“It was a good experience in terms of thinking things through methodically of how things should function, it gave us a better understanding of the mechanical world,” said Drew, crediting their teacher Mr Siriett for keeping them grounded throughout the project.

“You probably learn more doing this than what you would just looking at books,” said Max Bracken, who made a bike from scratch with teammates Josh Boyd, Ana Austin and Rory Thomson.

“It wasn’t just building a cart to go down a hill, it was building something that’s functional,” said Rory.

“The whole thing was just a problem to be solved, and our bike was the solution and it works,” said Josh.