Cambridge’s iconic white church is about to get some company from a new landmark being built at town’s northern entrance.

Work to install the 6m high, five-tonne Le Quesnoy memorial sculpture has begun at a site diagonally opposite St Andrew’s church, on the corner of Thornton Rd and Victoria St.

“It’s going to make a massive statement,” said Armistice in Cambridge chair Paul Watkins.  “It’s quite a modern piece and it’s in a wonderfully prominent location.”

Paul’s group commissioned the sculpture to commemorate 100 years since New Zealand WW1 soldiers (including a number from Cambridge) liberated the French town of Le Quesnoy from the Germans on November 4, 1918.  Local artist and kaumatua Fred Graham designed it, taking inspiration from the Eiffel Tower and the silver fern to create a work denoting both celebration and sacrifice.

The sculpture was originally due to go up in time for last November’s Armistice in Cambridge celebrations, but Paul said the process of getting it into the ground had been vastly more complex than anticipated.

“There have been lighting, draining, engineering considerations – we don’t want to put it up and have it fall over – so there’s been a huge amount of work involved with consents and everything,” he said.

However, with all red tape now cleared, diggers have rumbled onto the site recently to begin installing a 10m-wide concrete plinth, shaped like Le Quesnoy’s walled town boundary. 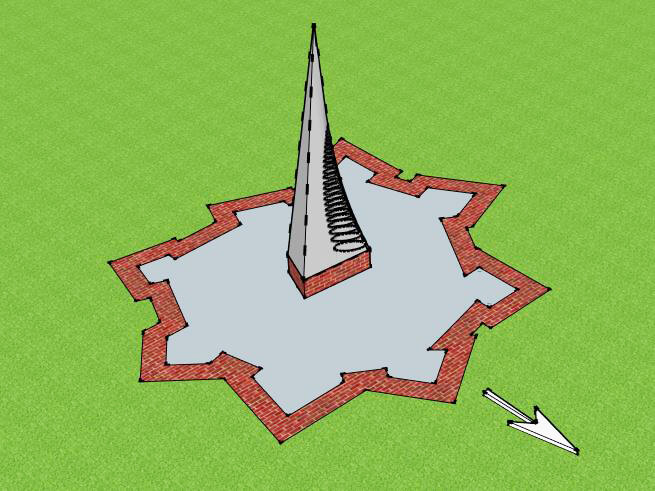 Concept plans for the sculpture.

“That will take about 4-5 weeks and we’re hoping to unveil it on Saturday the 2nd of November, because that’s the day closest weekend to the 4th of November, which is the 101-year anniversary of Le Quesnoy’s liberation,” Paul said.  “So the concrete might sit here for a couple of weeks until the sculpture’s lifted into position.”

Victoria St resident Maureen Pearson, whose windows will look directly over the sculpture, has been eagerly anticipating its arrival.

“It’s an absolutely wonderful idea,” she said.  “We’ve been dying to see it go up since the end of last year.  It’s a beautiful thing, from the photo.”

Her neighbour Henrica Kivits also liked the idea.  “It’s something different for people to look at,” she said.

Paul said the $100,000 artwork had been paid for by the national WW100 lotteries fund, with the Cambridge Community Board chipping in a small amount to help with installation costs.

Local contractors had been hugely supportive, with all offering free or discounted services, and the public’s response to the project had been “overwhelmingly positive”.

Ten-year-old Vivien Pettit and her mother Fiona, who walked past the site as work prepared to get underway, were also enthusiastic about Cambridge’s newest landmark, although Fiona was surprised they hadn’t heard about it.

“I think it’s nice that they’re commemorating the soldiers and our relationship (with Le Quesnoy),” Vivien said.

Paul said it was “extremely exciting” to see about five years of work finally coming to fruition.

“Everybody’s got behind this in a big way, it’s so cool,” he said.