The Reds – currently in fifth place – host Auckland’s Onehunga Mangere at John Kerkhof Park (3pm kick off) in a game that should have Cambridge as hot favourites. But in a season where the Reds have stumbled against lowly opposition and performed well against the top teams, nothing can be taken for granted.

Onehunga Mangere are second bottom in the Lotto NRFL competition and fighting to avoid relegation. They or Northland FC will drop, and the latter side caused Cambridge all sorts of problems over the weekend. In fact, Cambridge only took the lead for the first time in the 88th minute of their match before winning it 2-1, much to the relief of thier supporters.

Cambridge went into last Saturday’s match knowing a win would keep alive their hopes of achieving their highest Northern League ranking in 17 seasons. The sides played out an even first half in which most of the play was restricted to the middle third.

Northland produced the best chance of the half, forcing Cambridge ‘keeper Patrick Steele to pull off a spectacular double save as he blocked one shot and then fended away the follow-up strike.

After turning around with the game scoreless, Northland took the initiative by forcing a string of corners. From one of these, in the 64th minute, ‘keeper Steele could not take the cross cleanly and the ball strayed over the line for an own goal.

Northland continued to defend with passion while Cambridge started to patiently build attacks, having replaced the spine of the side with the substitution of Jack Portegys (ankle injury) and holding midfielder Harry Wicks.

The home side clawed their way back into the game when a corner was half-cleared by Northland, only for substitute Marcelo Sosa to chip the ball back into the box for Daniel Clarkin to head home in the 74th minute. From there, the balance of the game shifted clearly in the Reds’ favour and the home supporters got behind their team.

In the 88th minute, leading scorer Josh Clarkin kept his cool to beat a defender and then round goalkeeper Shane Stanners to tap the ball home from six metres, his 12th goal of the season.

Cambridge ran down the clock for a welcome victory.

Most of the Cambridge side produced decent displays but defender Kieran Vollebregt will relish the win – he played the full 90 minutes, making his first appearance in the starting line-up after impressing off the bench. He turned 17 last month and looks promising for next season. 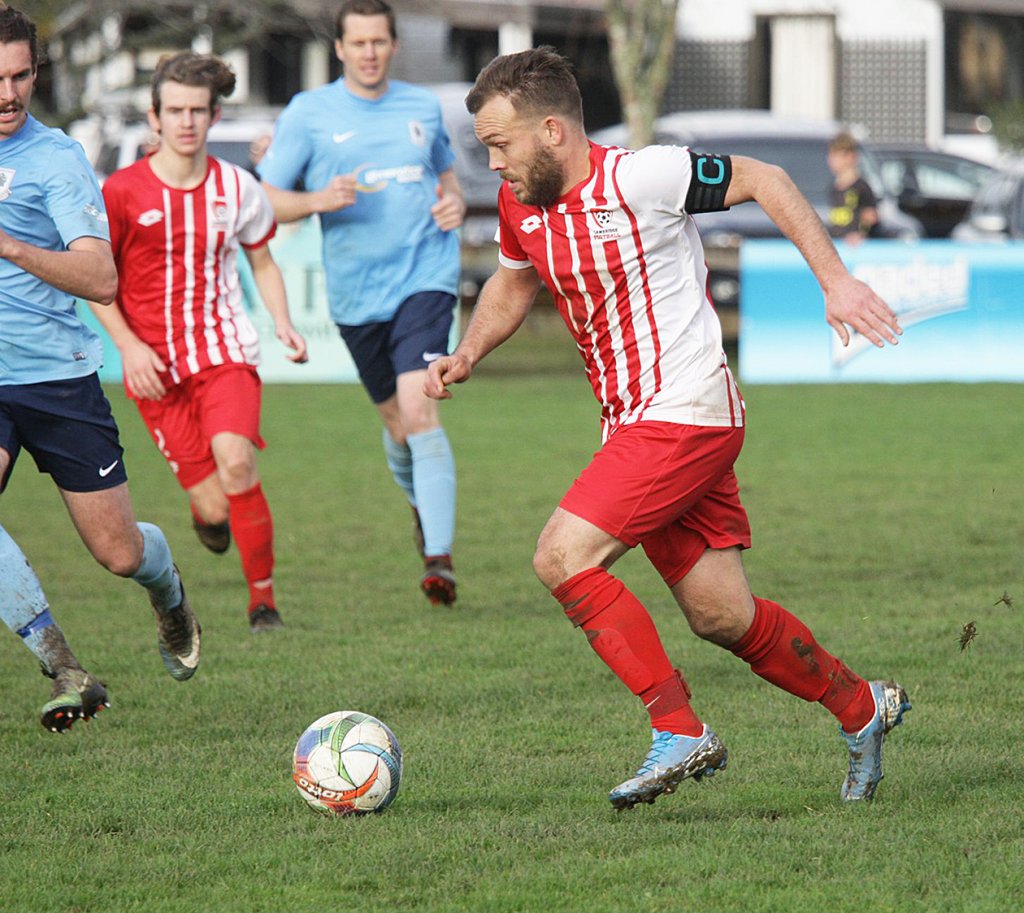 In the early game, the Cambridge and Northland reserve teams followed a similar pattern, with the visitors taking a 1-0 lead before the home side came back to win 2-1 win a last-minute goal.

An inspired display in difficult conditions – and a crucial penalty save – provided Cambridge’s reserves with arguably their best performance of the season.

The Reds made nonsense of the 10 placings that separated them from leaders Northland on the Lotto NRFL second division reserves competition table.

Northland went ahead in the 20th minute through Calvin Erick and the visitors took their 1-0 lead into the dressing rooms at half-time.

Cambridge came out for the second half with fire, and Aaron Jenkins drew his side level after 47 minutes with his first goal of the season.

The critical moment of the second spell came when referee Luke Agnew awarded Northland a penalty.

Reds ‘keeper Fraser Nicholls threw himself to his right and blocked the spot kick. That effort spurred on his team mates and forward Andrew Taylor found a winner right on full-time.

Meanwhile, Cambridge continue to deliver inconsistent displays in the WaiBOP Championship, with the side capable of beating good teams and losing to lesser lights.

In a match between two midtable sides, Cambridge had a chance to leapfrog Taupo with a win at John Kerkhof Park but the visitors kept the upper hand throughout. Taupo took a 3-1 lead into the half-time break, despite a goal from Cambridge captain Adam Brady after 25 minutes.

In the second half, Taupo outscored Cambridge to finish 5-2 victors. Cambridge’s second goal went to John Flood in the 77th minute while Taupo’s goals were scored by Aaron Kelly (2), Bradley Frew, Aaron Lawrence and Jack Rae.

In Waikato Division 3, Cambridge lost 4-1 to West Hamilton United at John Kerkhof Park. The Hamilton side took a 2-0 lead before David O’Donnell pulled a goal back for CambridgeHowever, West Hamilton asserted themselves in the second half, comfortably winning 4-1. Cambridge’s Player of the Day was Mariano Castellon.

In Waikato Division 4, Cambridge were well beaten 8-0 at Melville United.

The women’s team’s match at Huntly Thistle was called off by the referee at the start when torrential rain made the playing surface unsafe.