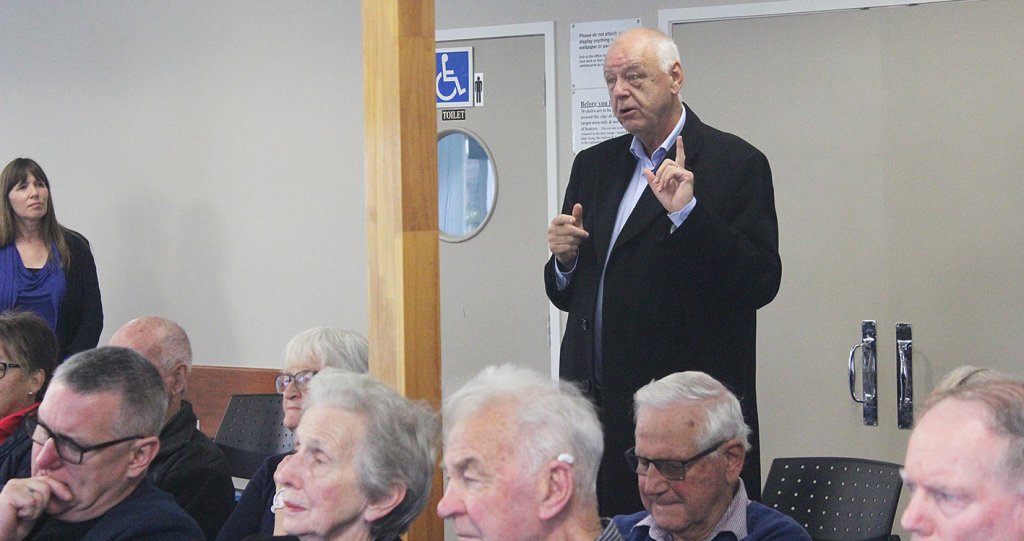 Roger Gordon asked MPs about what could be done to make State Highway 1 south of Cambridge safer.

Motorists have complained about State Highway 1 south of Cambridge, saying it has dangerous intersections, increasing use, a high crash rate and a flurry of potholes.

“The road down to Rotorua is filled with potholes,” Andrew Breakwell said at last week’s Friendly Forum in Cambridge, hosted by Taupo electorate MP Louse Upston.  “I’ve had to get two new tyres.”

“To be fair the complaints started in the last year of our time in office,” she said.

But she added the project to extend the expressway to Piarere was planned, funded and underway when National stepped out of office in 2017.

“Any time you hear the government say the Cambridge to Piarere project wasn’t funded, it was. Because land owners were being approached, acquisition of land was underway, it was absolutely there. Basically, the money that was allocated for that, and a lot of it will now be spent in Auckland.”

Falloon detailed roading projects in his Canterbury patch that got the axe.

“I actually feel sorry for NZTA in a lot of ways,” he said. “There were about 10 projects (across New Zealand) that were planned or proposed or underway that were cancelled by the incoming government. And not only that, they also ripped $5 billion out of the state highway network, and funnily enough it’s all going into Auckland railway and cycle way projects. So, the money that comes from petrol tax and your road user charges is now being sent off to Auckland for public transport projects, instead of being spent on roads.

“And so, with the potholes and what have you, it literally is for that reason. Because they have less money now to not only spend on those upgrades that we need, but also to spend on maintenance.”

Community board member Philip Coles highlighted local efforts to make the SH1 road safer, including meeting with the NZTA to get warning signs and lights introduced at the Karapiro Rd intersection with State Highway 1/Tirau Rd.

“When National come back in its going to take years to get that (expressway extension) project back up and running again with the funding and the people required. So, for now we’re just wanting some safety measures to slow people down at those intersections (Karapiro Rd and SH29). When I met with NZTA last month out at Karapiro, it was really disturbing to hear that they’ve got no funding at all in the budget to put safety features in at that intersection.”

Roger Gordon stood and said the Hobbiton movie set had just gained resource consent to increase visitor numbers at the site to a million.

“They have made a tremendous contribution to this area… but because of that, traffic is going to increase even greater than what is planned. So, I think there is a real need to get something done on that Piarere section.”