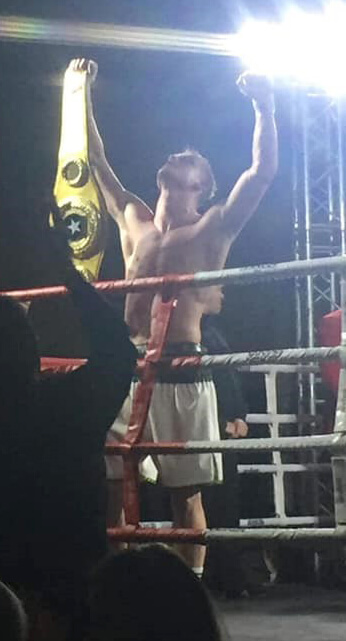 The bright light of New Zealand boxing outshone a veteran, and another Karapiro fight night was confirmed last weekend.
Andrei Mikhailovich outpointed Gunnar “The Stunna” Jackson to win the vacant New Zealand (Pro Box NZ version) Middleweight weight title, and Jackson duly announced his retirement.
The venue – Sir Don Rowlands Centre in Lake Karapiro – was also confirmed by promoter Nigel Elliot as confirmed for another evening of professional boxing on November 23rd.
Mikhailovich was taken the distance for the first time in his career by the veteran Jackson, but he was a clear winner over 10 rounds – getting a unanimous decision from the judges. Two gave him eight rounds, the third nine.
Given what happened after the fight, it was appropriate that the crowd were treated to the full 10 rounds.
Mikhailovich paraded his boxing skills, landing the jabs first, loud power punches to the body and heavy punches through Jackson’s guard.
Equally impressive was the young fighter’s composure as Jackson sought to unsettle him verbally.
By the seventh Jackson was clearly feeling the effects of Mikhailovich’s power.
The post-match talk followed a familiar route as Mikhailovich – who is looking forward to becoming a father this month – said all the “trash talk” between the two was part of the game, he had a lot of respect for Jackson and was honoured to fight him.
When Jackson took the mic the crowd was silenced as he congratulated Mikhailovich and predicted he would become a world champion.
Jackson’s wife Jessica the stood beside him as he announced that win or lose on the night, he had decided to retire.
His career has featured 46 professional fights, a WBO 10th ranking in the world, two New Zealand titles, two WBO Oriental titles, WBA, PABA, Pro Box Pacific and Central North Island titles.
champion and has never been knocked down or knocked out in his professional career.
He ends his career with the record of 29 wins, 13 losses and 4 draws. Twelve wins were by knockout – and he was never knocked down.