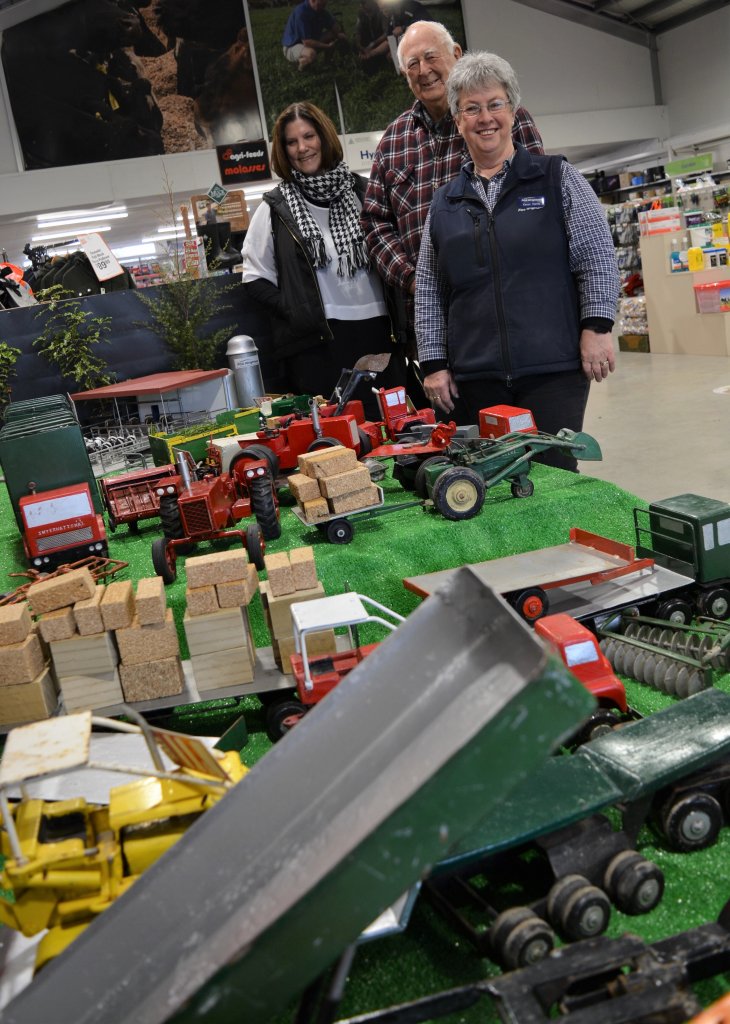 Toy maker Jim Kerr at the display at PGG Wrightson. With him are Dr Bronwyn Byers and Wrightson staffer Karen Harris (front).

A man best known in Cambridge for his pink meringues has turned out to be a closet master toymaker as well.

Jim Kerr has been building and fixing toys for as long as he can remember, and now some of his eye-popping collection have been put on display at PGG Wrightson in Cambridge’s Duke St.  That was the perfect choice of venue because most of his toys are models of agricultural vehicles or machinery, and Jim is particularly delighted to see how the Wrightson crew have added ‘farming’ touches to give the display an authentic feel.

“They’ve added grass and haybales, bits of grain and feed in front of the cows … it’s lovely,” he said.

The display will be up for a few weeks, and is likely to draw in youngsters during the school holidays.

At nearly 84, Jim is familiar locally for the meringues he makes and hands out around town.  They are personally-delivered in little bags – the leftovers after he has whisked up and distributed thousands of meringues to various charitable organisations, including the Cancer Society and Waikato Hospice, on special days throughout the year.

He’s been doing that since his wife Joy died in 2000; his story earned him a slot as one of television’s early Good Sorts.

Jim said Joy was the one making the food, while he’d be growing it in the garden.  What people often didn’t know was that Jim was always tinkering away on toys behind the scenes, either making them new or fixing up and painting old broken bikes, toy trucks and diggers, trains and whatever else came to hand.

“We had to make our own toys as kids,” he said. “Santa sometimes brought the odd one, but we had to fix anything that broke.  I’ve been doing it ever since.”

The display came about after new Cambridge resident, Dr Bronwen Byers, set up home here and joined a 60’s Up session.  The doctor of social policy who has worked in community development for years ended up chatting to Jim … and the rest is history.

“All I really did was negotiate with him over the past four months and try to persuade him to put his toys on display. I told him ‘you don’t need to be so modest’, and here we are,” she said.

It seems there’s even more to Jim than toys and meringues. Turns out he’s been playing the bagpipes with the Cambridge and Districts Pipe Band for the past 68 years. It’s something of a nod to his Scottish roots, and a musical link he shares with his cousin John Hargreaves, who has been with the Cambridge Brass Band for 71 years.