There’s plenty to smile about in Cambridge when it comes to rugby.

Last Saturday Hautapu were crowned Waikato club rugby champions after a gruelling final against Fraser Tech. It completed an unbeaten season for the Craig Stevenson-coached side, which played 18 and won 18.

Leamington had cause to celebrate too – it’s under-21 side brought home the Elliott Trophy for the first time after the Colts beat United Matamata Sports in their Waikato final.

And Cambridge High School’s first XV saw off a game challenge from Te Awamutu College to retain both the coveted Tricolor Tropy, and the Waipā Cup. The Hautapu Sports Facebook page proclaims “18-0”.  Which is true from the perspective of games played and games won in Waikato’s premier club rugby competition this season.

But winning the Waikato Breweries Shield came down to a much closer margin.

Unbeaten Hautapu was made to work all the way on a drizzly Hamilton evening at FMG Stadium last Saturday to put the finishing touches to a stellar campaign.

Fraser Tech – easy beats just a fortnight earlier – pushed Craig Stevenson’s side all the way in the final, which was only decided with a couple of minutes on the clock when Coby Miln nailed his fifth successive penalty.

Hautapu added the Shield to the Ron Crawford Memorial and the Has Catley Trophy for first and second round winners.

The 22-13 margin reflected the closeness of an arm wrestle which saw both sides enjoy periods of dominance for little reward.

But with 70 minutes of the season remaining it all looked done and dusted. The Cambridge side came out of the blocks flying and scored a point a minute in the first 10. 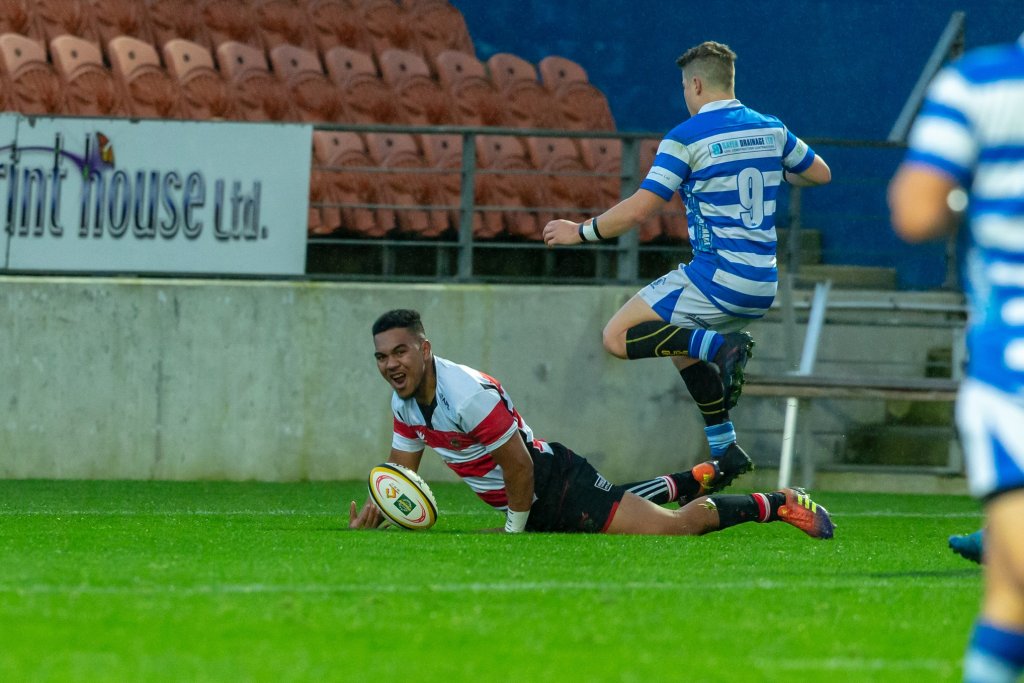 As it turned out, Paula Mahe scored Hautapu’s only try of the game and when Tech crossed the line through Peniasi Iowane after 60 minutes to close the gap to 16-10, Hautapu’s management and fans must have been thinking back to 12 months earlier, when the 2018 final went against them and Hamilton Old Boys celebrated a 42-27 win.

A subsequent exchange of penalties followed, and into the final five minutes Hautapu took the upper hand, pressing Tech back and eventually being awarded the penalty which put the game beyond reach and saw Miln finish with a six from six kicking record and 17 points on the night.

As skipper Jono Armstrong noted: “two weeks prior we absolutely rolled Tech, but it was a close battle, they really came out to play.” Sekope Moli charges the ball through the Fraser Tech defence, supported by Ollie Norris and James Thompson and watched on by Hamilton Burr and Jake Stratton. Photo – Lauran Robinson.

Waikato Rugby Union officials haven’t officially confirmed it, but rugby anoraks are confident Hautapu’s perfect record is the first since the competition was launched in 1967.

Melville women achieved the same feat earlier in the day in the women’s final, 34-19 over Hamilton Old Boys.

‘It was almost a bit surreal,” Armstrong revealed. “It wasn’t until the 14th or 15th game that the coaches actually made it known that we were setting a record, we were just going out each week enjoying what we’re doing and winning. And winning easily.”

There was nothing easy about the final, but as Armstong noted: “the key thing was we really earned it.”

It’s the first time the Shield has resided in Cambridge since the Hautapu sides of 2006-07 repeated the back-to back efforts of the club’s 1998-99 squads. Club officials are planning a mini tour for the shield – displaying it at some of the club’s sponsors’ bases before it’s put to bed inside the Hautapu clubrooms for the next 12 months.

“We’re extremely proud to come through with the victory, it’s been an outstanding year,” Stevenson said.

“Going unbeaten was something really special, it culminated in a win on Saturday night and it was for everyone. It was for the community, our supporters, sponsors families. It was a really outstanding day that everyone enjoyed being part of.”