Two Cambridge girls have secured their place on a television cooking show after finishing runners up in the 2019 Junior Chefs of Aotearoa competition. Next year’s competition will be aired on TV, and organisers have promised this year’s top six contestants will have automated entry.

“We were really happy to come second, it was still a great achievement,” said Meeka.

The two have enjoyed cooking and baking for as long as they can remember and had wanted to enter a cooking competition for some time. So when Bella’s mum Rhiannon came across the event on Facebook, they jumped at the chance.
“I thought they did amazingly,” said Rhiannon Lattin, who along with other parents got to try the dishes after the judges had finished their assessments. “The food they produced, especially in the last round, was restaurant quality, nothing that I wouldn’t pay good money for in a restaurant.

“I think everyone had something go a little wrong at some point, but resilience overcame and they were able to problem solve under pressure.”

Bella and Meeka said they found the first round the hardest, unfamiliar with the facility at Rotorua’s Toi Ohomai Institute of Technology. Being from outside of Rotorua, they hadn’t familiarised themselves with their work space like the other contestants had.

But they did well nonetheless. “We nailed the steak,” said Bella, after they made a steak and mushroom meal from the “mystery box” in round one. Round two, on the same day, was a veggie burger challenge, and despite forgetting the corn for the patties they still managed to win.

Rounds three to six took place over the following four days, with teams eliminated after each round. They finished second for the “family favourite” third round, making a Thai green chicken curry, and won round four running a street food stall which raised over a thousand dollars for Hospice.

They “nailed” the meat once again in round five, where they created a meal to accompany their randomly selected cut of meat – rack of lamb. “It was perfect,” said Bella. 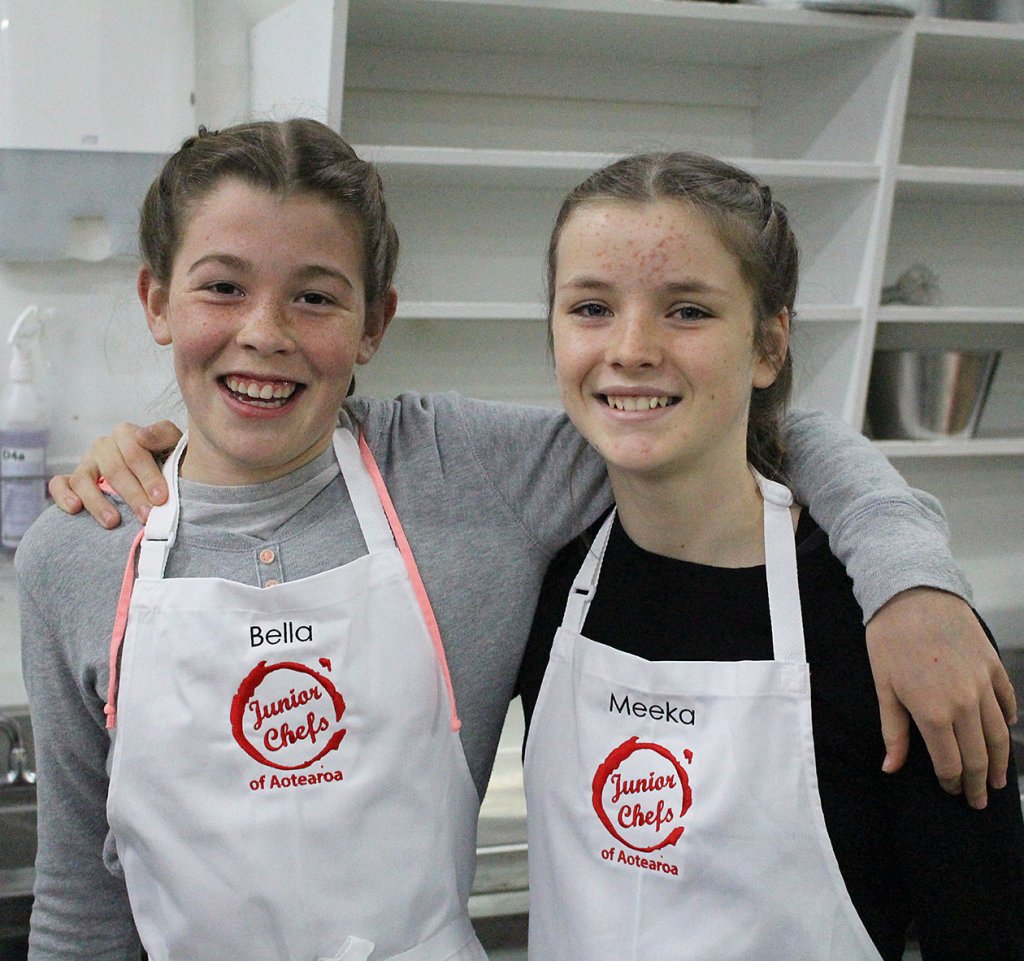 Bella Lattin and Meeka Truscott had good reason to smile after winning round two of the competition.

But round six was the toughest of all, up against Rotorua’s Caitlin Kinsella and Kennedy Meads, where they were tasked with making a five-course degustation meal with three hours to prep and just 20 minutes to make each dish. It included a rocket pear salad, a Scottish oat crumbed fish, then a steak, pumpkin and stuffed mushroom dish. The last two meals were on the sweeter side, a lemon sorbet dessert followed by a complicated chocolate mousse and berry dome dessert. “They were our pallet cleansers,” Bella explained – the two girls having come up with all the meals themselves. “It was stressful but it was so fun.”

“At the start we were kind of out of our head space, but we started rolling and just focussed on each dish,” Meeka said.

The pair said they still love cooking, but were reconsidering the idea of entering the food industry professionally, at least in a high-speed kitchen environment.

“At the start if the competition I wanted to be a Michelin Star chef, but I don’t think I want to do that anymore!” Bella laughed. “It’s too much.”

“It would be cool but you also want to enjoy it while you’re doing it,” said Meeka.

The girls said the most important thing when it came to cooking was to not get too stressed, know what you’re doing and always prep the food before you start.