Knowing he would soon succumb to cancer, Jack meticulously organised his funeral, not because he wanted control, but rather so others didn’t have to worry.  By all accounts, that one act characterised the man.  Speakers at Jack’s service alluded to his empathy, integrity, honesty and wisdom, his deep love of family and passion for education, his fervour for high standards and his exhaustive capacity for fun.

Much of his farewell at the Raleigh Street Christian Centre centred on love, music and humour.  Children and grandchildren clearly imbued with his courage spoke about their dad and poppa. One daughter’s childhood memory was of the hearty laughter and unexpected creativity ‘tick’ after she duped him into trying a plasticine ‘moro bar’, a granddaughter remembered riding in a sand-filled trailer Jack towed through a bumpy track. Another smiled at his reaction to her 20-page powerpoint appeal asking Jack for permission to keep a pig at the home he shared with wife Glen. The appeal failed, but Jack was mightily impressed with her efforts.

Glen, Jack’s wife of almost 30 years, thanked the hundreds present for their support, saying she was “overwhelmed” by the response.

In both his personal and professional life, Jack seemed indomitable; an early test would have been beating polio at the age of four.

He was the eldest of four boys, born in Cairo to a returning serviceman and an Egyptian-born mother.  The family returned to New Zealand in March 1947 and settled in Cambridge. It was here Jack learned the piano accordion and excelled both academically and in sport, earning the tag ‘Speedy Reidy on the wing’.

“He was in the First XV rugby, the top tri-scorer each year for three years,” his brother Glenn said. “He loved school … he represented Cambridge in rugby, softball and basketball.”

After training as a teacher, Jack worked at Melville Intermediate and Mapiu schools before taking on his first principalship at Tuhua School. A decade or so later, he became principal at Goodwood School. It was a position he held for 32 years; when he retired in July 2015, he was New Zealand’s longest serving principal.

His efforts at growing Goodwood in both size and reputation won Jack enormous respect, as did his wider dealings in education. His rapport with Waikato University enhanced the school’s success, and Jack’s innovative leadership meant his advice was sought far beyond Cambridge’s boundaries.  In the late 1990s, Goodwood was one of very few primary schools awarded $600,000 for a four-year project as part of the then government’s Extending High Standards Across Schools initiative.

An enduring love of the bush meant Jack was equally devoted to the Port Waikato School Camp. He embraced the opportunities it offered children and steered its finances masterfully over decades. He has held leading positions with the New Zealand Educational Institute, the Principals’ Association, Port Waikato School Camp, and Cambridge Lifeskills, and was awarded life membership of the last two. 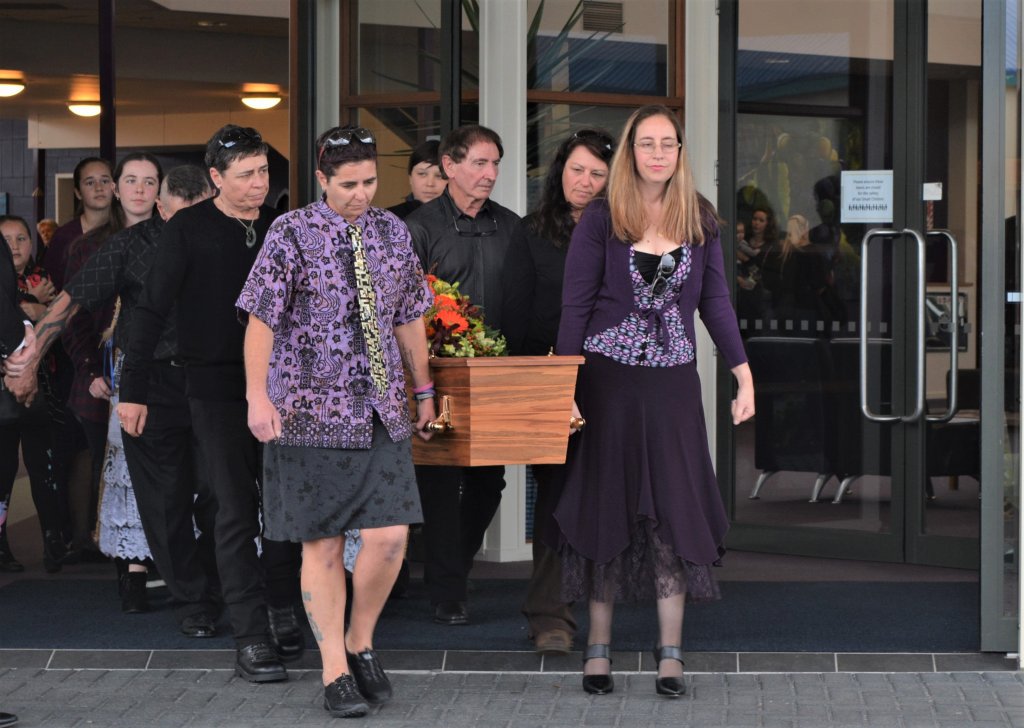 Those at the service heard how Jack excelled at everything he did – and there was plenty of it.  Aside from education, he was a skilled craftsman and cabinet maker, plumber, drainlayer, fisherman and fencer, tiler and paperhanger, pretty much anything he turned his hand to.

Eulogies were delivered by friends and family wearing ties and shoes as a nod to Jack’s dapper dressing habits, and a special ‘korowai’ made from paper ties carried farewell messages from Goodwood students.

An Egyptian cartouche crafted from a piece of rimu taken from one of Jack’s fences was placed in his casket. On it were hieroglyphics intended to protect Jack in his next journey, and a poem written by his daughter Tanya Reid when she was 10 – and added to recently – entitled ‘My Super Dad’.

Jack is survived by his wife Glen, four daughters and six grandchildren.

“He was ahead of time in so many ways, and firmly believed in students having a voice in their school and in their learning. He had vision, building the school from three classrooms to the 15 we have today … and created a wonderful learning environment,” he said. “Jack was equally comfortable designing large projects as he was laying the cobblestones or building a fence himself.

“He cared deeply about children, their families and the school staff. This duty of care guided all of Jack’s decisions. Many hundreds of children and teachers have benefitted from his leadership over the 32 years he served the Goodwood community.”