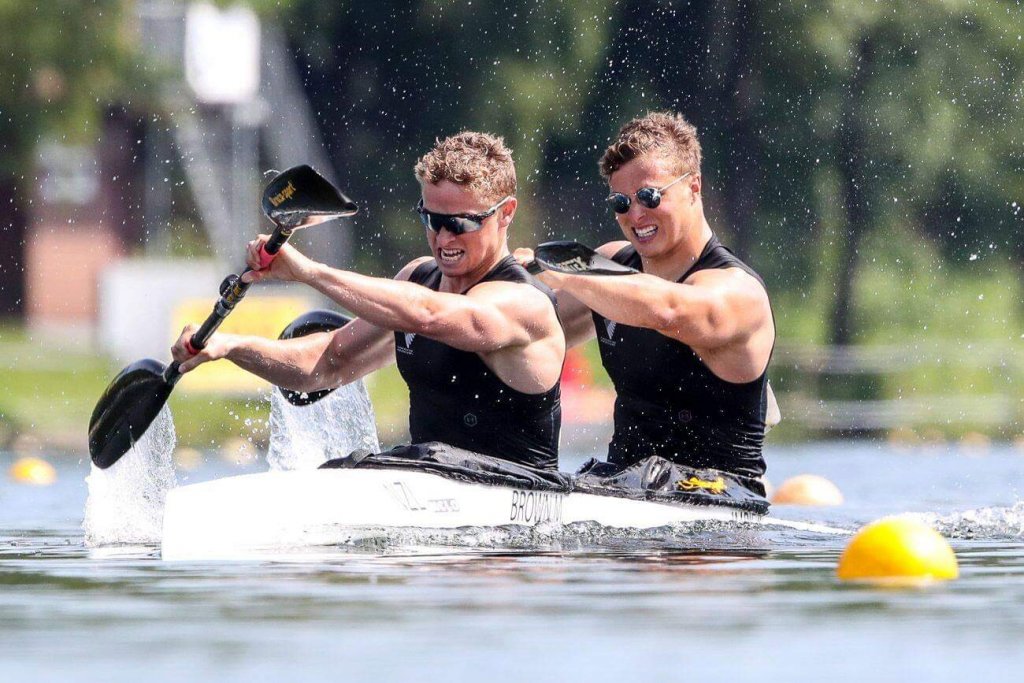 The NZ Men’s K2, Max Brown and Kurtis Imrie, on their way to a world cup top-eight finish.

The NZ Men’s Kayak squad has returned to Cambridge after touring the world cup circuit in Europe.

During their campaigns of the ICF Canoe Sprint World Cups 1 and 2 the young paddlers managed to take their next steps towards Tokyo, finishing in the world’s top eight and shortening their personal-best times.

“It was the first time we’ve focussed on competing in the K2, and to come away with an A final finish at our debut was pretty satisfying,” said Kurtis, 23. “It’s safe to say we were pretty happy with our results.”

Alongside Max, 23, the pair are the oldest in the NZ Men’s Kayak team and stepped up from their former under-23 world competition to compete for the first time at an elite-level event.

“I’d never even made an A final as an under-23 competitor, and then our first time at an open event we make the A final, that was quite special for us,” said Max. The NZ Men’s K4 crew of Ashton Reiser, Ben Duffy, Zach Ferkins and Hamish Legarth were also competing for the first time on the elite circuit – which has an average competitor age of 28. Ranging in age from 19 to 21 the men were believed to be the youngest crew at the events. They finished eighth in the B final of World Cup 1.

“We were really happy. We were a brand new crew, we’d only trained for three months together, and we were the youngest crew in the field. And we just made huge gains every time we raced,” said Ashton.

In the last week of July the crew will compete at the Under 23 World Champs in Romania, where they could qualify for the world champs if they make at least the top five in their K4 500m final. Kurtis will also compete at that event in the K1 (single).

The K2 pair has already qualified for the ICF Canoe Sprint World Championships, being held August 22 – 25 in Hungary. With the event doubling as an Olympic qualifier, it leaves both crews eying the potential of making the 2020 Tokyo Olympics. Now back home at their training base in Karapiro, the NZ Men’s Kayak team continues to train rain, hail or fog.

For now they continue to paddle 150km per week in addition to regular gym training as well as studying or working full time. Their training begins at daybreak on their Karapiro training waters even on the coldest and foggiest of mornings.

“We can’t really stop, the Europeans are training in summer at the moment so our competition has the advantage. That means we just have to train it as if it’s summer,” said Max.

“We have got lost in the fog before,” Ashton laughed. “But that was more in the past, now we just hug the bank and really stick to the side, and you kind of know where you’re going.”