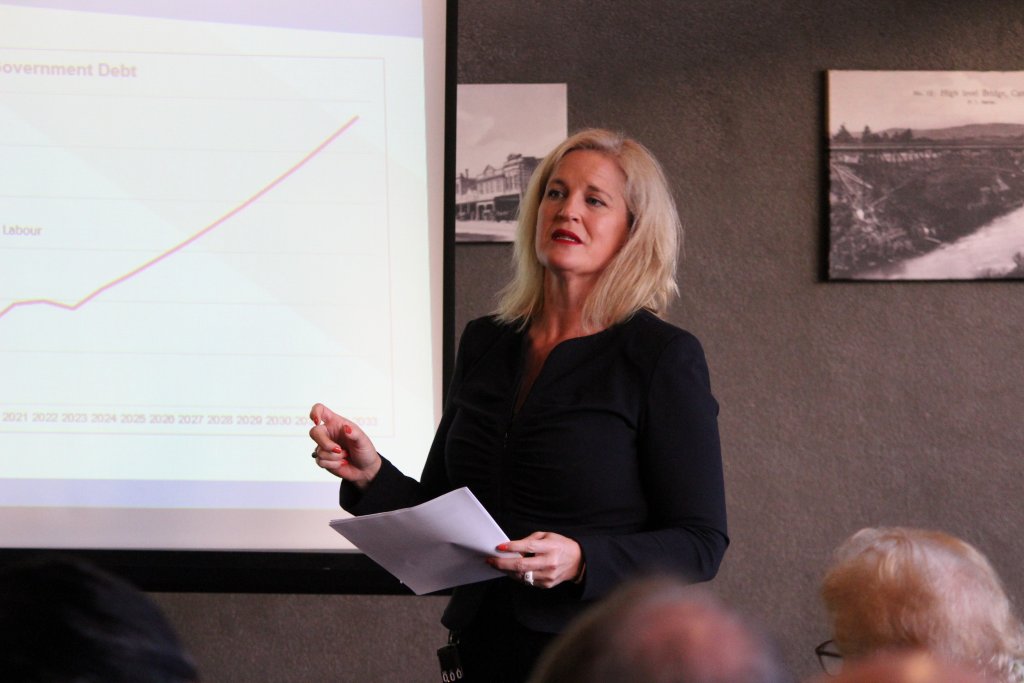 Louise Upston says Waipā’s economy is doing well, reporting at a post-Budget business forum hosted by the Cambridge Business Chamber on Monday that the district saw 4.7 per cent growth in GDP last year.

The Taupo electorate MP, who is also a Cambridge resident, reported that employment growth in Waipa was up 5.4 per cent, and business growth up 1.4 per cent.

“Tourist spending has recovered, which is great news for the local economy, but it means more traffic on our roads with little investment,” she said, going on to highlight items from the 2019 Budget.

“Part of the job of the opposition is to hold (Government) to account and ensure they deliver the promises they made in the period before the election and straight after,” she said.

She pointed out the project to extend the Waikato Expressway from Cambridge to Piarere could now be over a decade away after the Labour government cancelled the project in December.

“The Cambridge to Piarere (expressway extension) was approved, confirmed, funded and underway … they cancelled that, and there’s no plan for when that’s going to happen. … NZTA is basically saying it will be a decade.”

Over $4.8M was spent on the project by the previous National government, not including maintenance costs or the current safety work.

Upston said it wouldn’t be “just that easy to switch it back on again” with a new National government, because landowners had changed their plans since the project was cancelled, and the work force that was planned to work on the extension project – after finishing the Hamilton section of the Waikato Expressway – would have moved on by then.

“And the government has committed to other projects, so depending on how far down the track those other projects are, we’d have to then cancel those or fund both in parallel,” she said. “So we’ll have to see what happens, what I will continue to do in the short term is to pressure (Government) for other safety measures, because what they have in place is what (National) had already committed to. It’s not sufficient with the volume of traffic that’s going to hit that road once the Waikato Expressway is completed.”

Highlighting the fact that the Waikato Expressway had been built to specifications for a 110kmph speed limit, the recent proposal to reduce state highways to 80km was “moving into third world territory”.

“We should have a State Highway 1 that is fit for purpose, and whether it’s people or freight, should be at a certain standard.”

With less than 18 months until the general election, Upston took the opportunity to highlight other perceived shortfalls by the Labour government – an increase of $20 billion in national debt, seven new taxes introduced after a promise of no new taxes, and around 100 homes built so far under Kiwi Build, which promised a thousand houses by next month.

“We would have expected more (funding) in education, particularly in infrastructure. They did manage to fund some artists in schools.This is where the challenge is, $2.6 billion into fees-free tertiary education is the decision they’ve made. But if you haven’t got a classroom for your primary school kids to sit in, it’s a bit pointless.”

She said during the first year of fees-free tertiary study, the number of students enrolled fell.

“So what that tells us is that students were going into tertiary study anyway, except they’re now being paid by tax payers.”