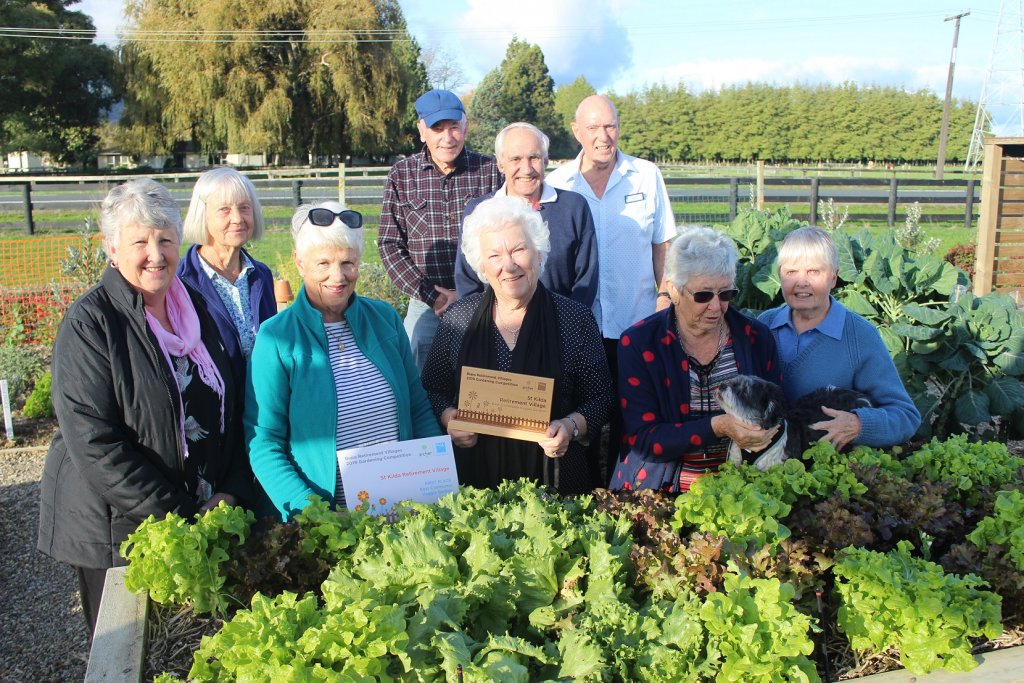 The judges, taken back by the variety and sheer scope of the project, described it as a “spectacular” garden. Established towards the end of 2018, the garden boasts 25 different varieties of vegetables and is completely organic.

“I think it’s the composting and the whole organic process really,” said Ann Norris. “It’s quite important at this age not to be eating any toxins. We don’t spray or use any chemicals.”

Ann initially came up with the idea to create a much bigger project than the existing St Kilda village garden, and worked amongst a team of residents to design and establish the garden in a decent area of land where buildings couldn’t be erected under pylons.

“The scope is much better on this one. We’re lucky to have this spare land which is amazing, which other villages don’t have,” she said. “We’re just chuffed (with the award). We worked really hard.”

The group of nine gardeners beat out 31 other Bupa St Kilda village gardens. They credit the work of each team member, especially Merv Taylor’s dedicated watering regime, for its success.

“People just do what needs to be done and it works really well,” said Ann.

When they first started the garden with a few planter boxes, nothing seemed to grow. They made compost using horse manure from a neighbouring farm, and it did the trick, bringing worms to the area too. They then attracted bees – pollinators – using flowering plants, and even propagated their own seedlings. Within a few months they had established an expansive garden with wind-protection walls, a seating area and a garden shed for seedling work. Keith Norris and Merv Taylor even built a sales trolley for distributing the produce amongst the village.

“They’ve put so much hard work into it, it’s quite extraordinary the work they’re done and the produce they’ve got out of it,” said Chris Thomas, the village manager. “They have a lot of knowledge and enthusiasm, they do a lot of their own propagating and composting on-site and the results have been extraordinary.”

The group described the nine-month venture as a learning journey, sharing knowledge amongst each other and picking up tips where they could. “We’ve learned what to plant more of and what to plant less of,” said Merv, as the team recalls planting a whole packet of cabbage seeds which resulted in a hoard of cabbages.

Beverly White’s careful procuring of kumara plants from old kumaras came to the rescue when plants from the store “turned their toes up”. Once planted in the team’s robust compost, they took off. “You could hear Beverly screaming all over the village when she dug her first kumara,” Ann recalled. “It was 2.3 kilos, just one kumara!”

“Everything’s been so good, not just the kumara,” Beverly said. “It just seemed everything was right this year, we’ll have to keep our fingers crossed that it will happen again.”

The group had a few simple tips for keeping a great garden:

·         Regular watering – “Keep an eye on the watering, especially when it’s dry,” said Merv. “We have automatic sprinklers come on each morning, and then just hose around the outside.”