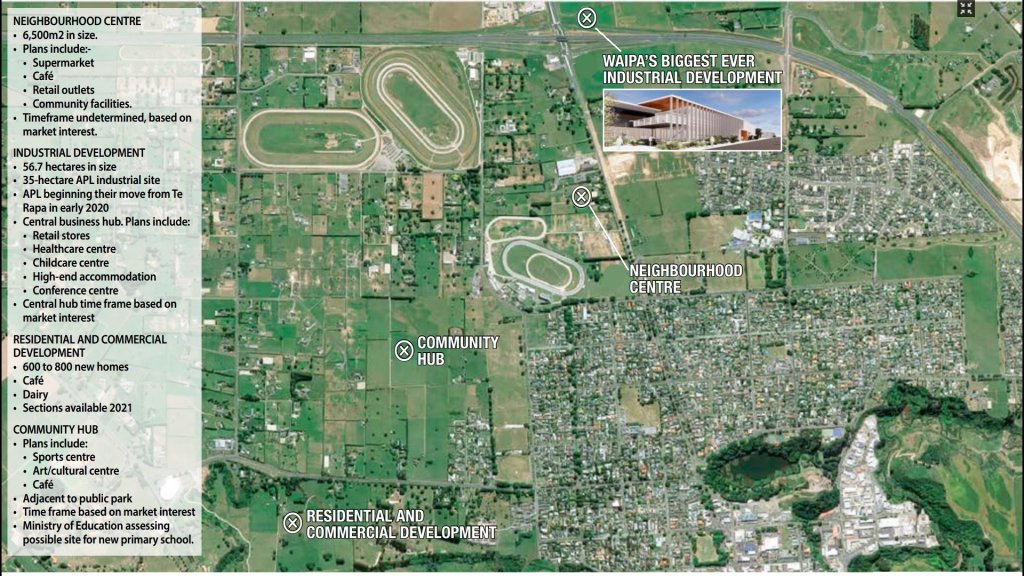 An aerial view of Cambridge indicates the approximate areas where the developments will take shape.

Waipa District Council is preparing the Cambridge landscape for its expected population growth of nearly 10,000 people over the next decade.

Already the number of residents has grown by over 1200 people in the last four years, now at around 20,400, and that’s expected to grow to 29,140 people by 2030. It means Cambridge will need thousands of new households and several more retail developments.

Council has planned for a neighbourhood centre on Victoria Road, adjacent to the north side of the green belt.

Separate from the APL development announced in December, this development, originally proposed in 2006 by CB2 Holdings, will stretch across 6,500m2 (including cark parking) and includes provision for a supermarket as well as other retail services, cafés and community facilities. Largely market-driven, time frames on the project depend on when retailers want to move in.

The same goes for the central hub, planned alongside the new APL development at Hautapu.

The 5.5 hectares area will include space for smaller retail stores, a healthcare centre, childcare centre and a high-end accommodation and conference centre. It’s expected to create 690 full time equivalent jobs and $39.8 million per annum in wages and salaries.

The APL development makes up approximately 35 hectares, and will see the company – which is New Zealand’s largest manufacturer of aluminium windows and doors – move its industrial sites from Te Rapa to Cambridge, beginning in May of next year, bringing with it approximately 100 employees. It will employ around 50 new staff when APL develops its new glass division during the first quarter of next year.

A central business hub has also been planned in the area to be occupied by APL. The organisation could not provide further details on the project, noting that it was still in the development stage and would be at least another five years away.

Hautapu’s industrial development is one of three rural areas of land rezoned by Council for commercial use. Finalised in March, the C1, C2 and C3 “growth cells” were rezoned to allow for residential and commercial developments. Cambridge Community Board chairperson Mike Pettit said new commercial developments were essential for Cambridge’s growth, but the focus must remain on the existing central business district.

Mike Pettit, chairperson of the Cambridge Community Board, said the organisation was all-for the development of new business hubs around Cambridge, but added that the focus needed to remain on Cambridge’s existing CBD (central business district), and keeping it centralised to town.

“We see (central Cambridge) as the existing CBD, with improved links to Lakewood and over time Carters Flat, upon zoning changes,” he said. “We need to be catering and planning for a town double its current population within our lifetime.”

Inside the C2 and C3 growth cells, more housing and retail developments have been planned.

St Peter’s School and Chartwell Investments Limited, landowners inside the 143-hectare C3 zone, plan to create a subdivision with 600 to 800 new homes. The project is in the very early stages – sections won’t be available until at least 2021 – but the idea, the school’s trust board chairman John Erkkila explained, is to make St Peter’s the centre of a community.

The subdivision will stretch from the Waikato River almost to the road (Cambridge Road), situated on the four grassy terraces between the Te Awa retirement village and the Avantidrome. The developers are also planning to include a cafe and dairy in the area.

Just down the road, the 161.6-hectare C2 zone runs from the edge of the athletics grounds, along Cambridge Road to Peake Road, and just over a kilometre down Peake Road. There, developers are planning for a café and sports centre, as well as the possibility of an art and cultural centre. Council confirmed the project would likely be located next to a park, similar to the St Kilda development.

“Their construction is largely market-driven, and will go ahead when businesses have indicated their intention to move in,” a Waipa District Council spokesperson said. Very early plans are also in the works to establish a new school inside the C2 zone, with discussions “on the way” between council and the Ministry of Education.

Susan Howan, acting deputy secretary, sector enablement and support, from the Ministry of Education confirmed the idea was being looked into as part of the organisation’s National Education Growth Plan.

“We are aware of the population growth in Cambridge and are currently evaluating a possible site for a new primary school should it be needed,” she said.