An RSA parade down the main street of Cambridge marked the start of the Anzac Civic Service of Remembrance. Photo – Michael Jeans.

Cambridge residents came from near and far on Anzac Day, April 25, making their way through a cold and foggy morning to attend Anzac services at the Cambridge town hall and cenotaph.

Members of the Returned Services Association marched down the main street, led by the Cambridge and Districts Pipe Band, to finish at the town hall for the 9am Anzac Civic Service of Remembrance.

The turnout was so large this year that the crowd flowed out from the town hall and into the plaza. A warm welcome by Mayor Jim Mylchreest started the service that was led by St Andrews Vicar, Reverend Malcolm French.

The solemn silence of the hall was lifted with beautiful music by the 40-strong Mosaic Waikato Modern Choir, the Cambridge Brass Band and the Cambridge Pipe Band, as well as a breath-taking performance of Hine E Hine by Soprano Elaine Wogan.

At the end of the service, community groups, service organisations and schools laid wreaths at the cenotaph. 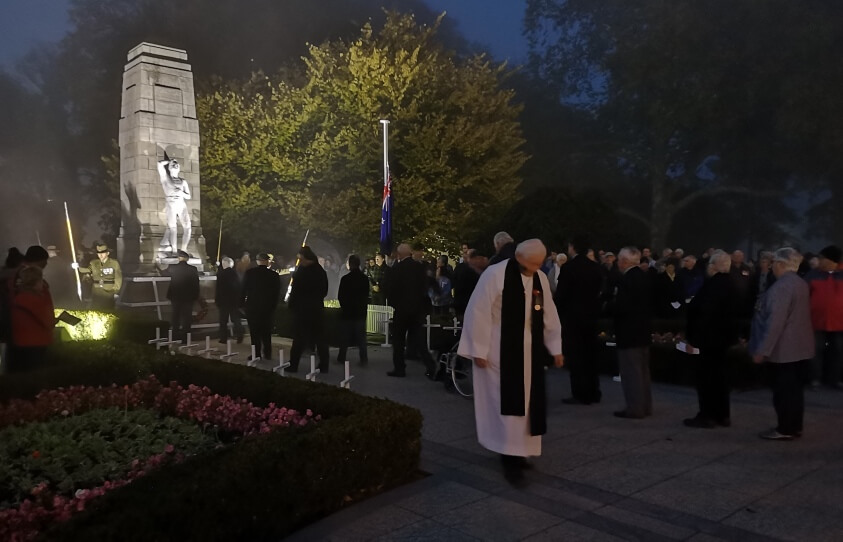 Hundreds of people braved the cold to stand and remember the fallen during Anzac Day’s Dawn Service.

Earlier that morning at the Dawn Service, about 500 Cambridge citizens solemnly stood in the early morning mist to remember fallen countrymen and relatives. Rev Canon Adrian Gover led the Dawn Service as the Last Post echoed across the town.

“Loss of young lives during wars has cut deeply. A swathe of loss has cut across our country and through our families. We must never send our young men and women overseas to fight wars again,” he said.

About ten remaining war veterans and other RSA representatives stood to attention in the centre of the square as the guard of honour marched to the cenotaph. Family members wearing medals awarded to their brave relatives were encouraged to stand with the war veterans and sing the New Zealand and Australian national anthems.

Afterwards the crowd silently walked to the cenotaph, where the New Zealand flag was at half-mast, and placed poppies at the feet of the statue to honour New Zealand’s fallen soldiers. Members of the Returned Services Association wore their medals on the day. Pictured are some of the ten RSA representatives that stood to attention in the centre of the square during the Dawn Service.

“There was huge attendance for Anzac Day in Cambridge again this year – we estimate over 1500 at the Dawn Service,” said Julie Epps, a member of the Cambridge Community Board’s Anzac organising committee. “As the sun came up at the Dawn Service, revealing the crowds of people, you could see there were people of all ages, sharing in the service and laying their poppies on the cenotaph.

“With everyone coming together for Anzac, the love, community spirit and pride in our community is really wonderful to see. Thank you to the many people who helped and a special thank you too, to our Cambridge police who have supported us so well during the commemorations.”

The photos and names of nearly 100 Cambridge servicemen who lost their lives during World War I were projected onto the town hall one by one in an effort to highlight and honour them as real, local people, who sacrificed their lives for the greater good, often at a very young age.

“It was a horrific number who died, almost 100,” said Julie Epps, a member of the Cambridge Community Board’s Anzac organising committee.

“As the photos scrolled through one by one, it was a vivid reminder that these men were fathers, sons, brothers, family.” Epps credited the Cambridge Historical Society for compiling the photos and names of the servicemen, and forming the projection slideshow with the help of sponsorship by Grinter’s Funeral Home. The slideshow is still available to view at the Cambridge Museum.

“Some of the photos were crystal clear; not surprisingly others hadn’t survived the passage of time so well, so it was harder to make out the faces of these young men,” Epps explained. “And for seven of the servicemen, photos haven’t yet been found. We would like to have photos for all the men, to put a face to each of their names. If you are a descendant of one of these seven Cambridge WW1 servicemen and have a photo, please contact the Cambridge Museum.”

A free concert by the Cambridge Brass Band and the Hamilton Big Band was held inside the town hall during the light show presentation, with a few Glenn Miller favourites inspiring the crowd to get up and dance.