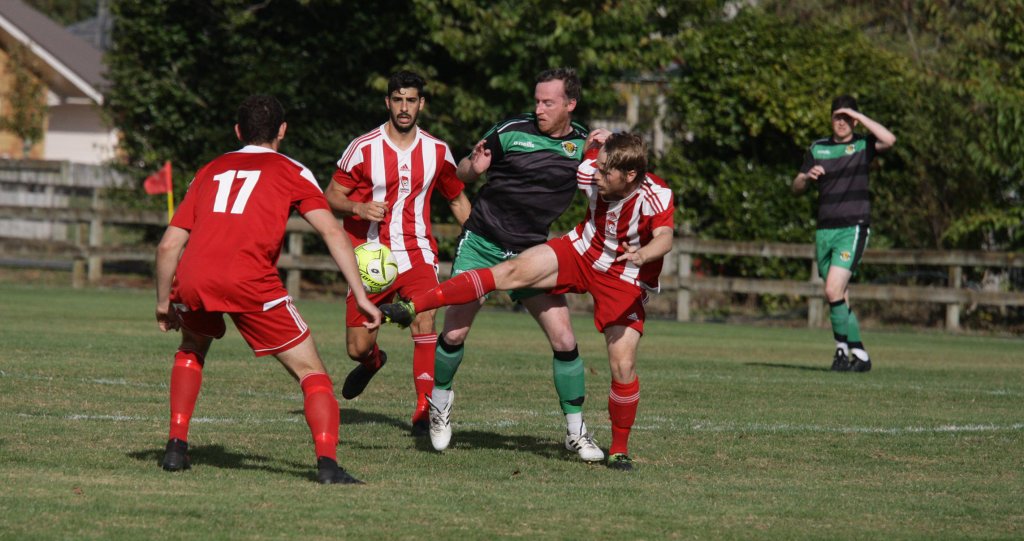 Cambridge have slipped to third place in football’s Northern League second division after the Reds lost their unbeaten run in the competition.

The Reds lost 2-1 to league newcomers Unimount Bohemian Celtic but showed tremendous grit after losing skipper Nathan Claridge to a first-half red card when the game was scoreless.

Once again, spectators at a sunny John Kerkhof Park were treated to a tense, hard-fought Lotto NRFL game decided by a single goal. This time, Cambridge were on the wrong end of a tight scoreline and with Hamilton rivals Claudelands Rovers winning against Northland FC, the Reds have slipped from the top of the league table.

Cambridge started best of the two sides and forwards Dylan Blair, Josh Clarkin and Callum MacLeod found plenty of space among the Celtic defenders. MacLeod found the net midway through the first half but his effort was ruled offside.

With half-time approaching, MacLeod was brought down on the touchline by Celtic captain Richard Murphy. In the kerfuffle that followed, referee Nadia Browning sent off Cambridge’s Claridge.

Despite being reduced to 10, Cambridge flew at Celtic for the remaining minutes of the half, and went ahead three minutes into added time. Leading scorer Blair lost his marker at a corner and deftly headed the ball inside the near post.

In the second half, the younger and fitter Cambridge kept the Aucklanders on the back foot and the Reds went close with efforts from MacLeod and Blair.

But with six minutes remaining, Celtic got their first real chance of the game and Craig Todd put it away to draw level. The goal created urgency for both teams and the final minutes of play were frantic.

The game turned in added time when Josh Clarkin was injured in a collision with a Celtic player, leaving him unable to finish the game. Down to nine men, the Reds tried to defend a free kick but Celtic’s Eoghan Murphy got a touch and the match was lost. In the early game, Cambridge’s reserve team lost 3-1 to Celtic’s second string side. Cambridge took an early lead through an Andrew Taylor header but the Aucklanders finished the game stronger after the game was tied 1-1 at the interval.

Meanwhile, in the WaiBOP Championship, a fourth-minute goal from forward Jason Szabo was enough for Cambridge to secure three league points against Claudelands Rovers at Galloway Park.Cambridge has experienced an inconsistent start to the championship, winning twice and losing twice in their games so far.

The win at Claudelands provided the team’s first clean sheet of the season and the side will be hoping to back up with another winning performance when they host Tauranga Blue Rovers in the main game at John Kerkhof Park this Saturday (tomorrow) 2.45pm kick off.

With the men’s first and second teams playing in Auckland – they meet Albany United in a Lotto NRFL double header – the championship game will be the main attraction for home ground spectators.

In other games, the Cambridge D1s crashed out of the Waikato Cup in the opening round, losing 6-1 to old rivals the NUSC Deciles. Cambridge got off to a poor start and trailed 4-0 at half-time. A goal from last year’s leading scorer David O’Donnell helped a better second spell for the Cambridge visitors.

In Waikato Division 4, Cambridge D2s lost 5-2 to Eastern City at John Kerkhof Park. Andrew Thomas and Chris Hill scored for Cambridge in the first half, sending the sides into the break tied at 2-2. However, City proved the stronger team in the second half.

Last Sunday, the Cambridge women’s team lost their Waikato Division 1 match by 4-1 at Tokoroa, despite taking a first half lead through Caitlyn Varcoe. The Hill Homes Player of the Day was Georgia Bellamy-Hill.

The women play Waikato Unicol on Sunday at John Kerkhof Park, kicking off at 11am.