Cambridge bands among the best at Rockquest Betend Rocket performed for their second time as a band at Rockquest on May 17. Photo – Carl Gordon / Planet Pix Photography.

Cambridge High School’s Betend Rocket, and two St Peter’s School groups made it through to the regional finals on June 28 after competing against a record-number of 32 bands on May 17.

It was Betend Rocket’s second time performing in the annual secondary school competition, this time playing without their lead guitarist Ben Cooper because he no longer attends school.

It meant lead singer Josh Bam, who normally plays rhythm guitar, has had to play both lead and rhythm guitar parts in this year’s competition, as well as singing.

“It was a bit challenging at first, but I got used to it,” said Josh, relieved that their song Hamilton Girls mainly involved rhythm guitar work. “It wasn’t too technical, I think we played really tight,” he said. “Afterwards we just wanted to play more.”

Drummer Connor Quickfall will be un Europe during the regional finals, so the band is contemplating performing as a two piece, with Josh and bassist Keenan Tuwhangai, or entering the Rock Shop “Second Chance” round, where judges can consider them for the national final by viewing a 15-minute live performance video.

“We’ll see how we go,” said Josh, Keenan adding, “We’ll make our video, and if we’re not too confident we’ll be able to get to nationals with it, we’ll just go to regionals and play as a two-piece.”

Last year Betend Rocket made it past the regional final and into the country’s top 20. Regardless of how they get on this year, the band says they’ll continue to create their own music and hope to eventually ‘make it big’ one day. 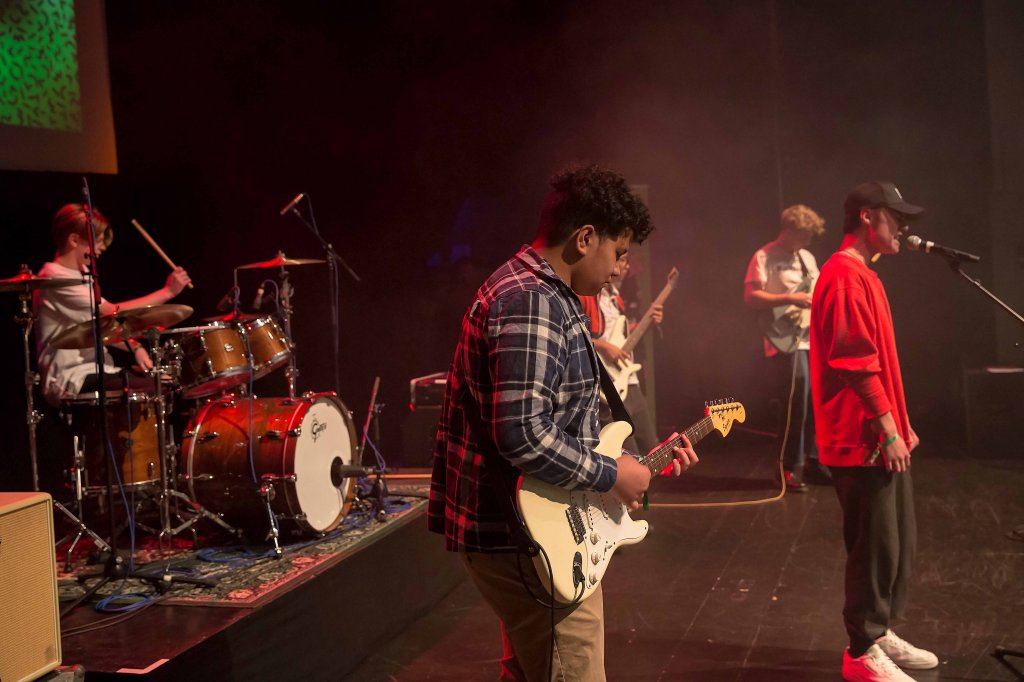 The Breethaz stood out at Rockquest for their RnB and reggae style. Photo – Carl Gordon / Planet Pix Photography.

St Peter’s band The Breethaz has made it through to the regional final as one of the few RnB bands in the competition.

The group is led by a familiar face which recently played the lead role in the school production of Bonnie & Clyde. Connor Kelly-Gage, lead singer of The Breethaz, performed his final show as Clyde on May 9, and jumped straight into a week of full-on rehearsals leading up to the Rockquest heats.

“It was basically just a mix of everything all the time!” he said. “I mainly prioritised the school production, and once that was over I just got straight into it.”

In fact it was his involvement in the musical that partly helped them write their Rockquest song, Harley Davidson.

“When we were writing our song I was still in Bonnie & Clyde. … Because I had one of the Bonnie & Clyde songs in my head we used some of those lyrics as a starting point to write our own … We just started freestyling and having fun.”

“Basically we used those lyrics while we developed our song, and then put our own lyrics in,” rhythm guitarist Brandon Lowther said.

“It was scary watching all the other Rockquest bands … Our sound was a lot different to everything there, so we didn’t know how everyone was going to react.

“But the crowd was actually pretty surprising, we got quite a few cheers compared to the other bands.”

The boys credited a contingent of St Peter’s supporters in the crowd for boosting their confidence and bettering their performance. “We kind of fed off each other,” said Brandon.

“A lot of the girls from school were sitting in the front row cheering for us so that was pretty cool,” Connor added. “It was a good experience all round to be honest.”

Meanwhile fellow St Peter’s student George Roberts, lead singer and bassist of the band Casper, also made it through to the regional final with his Hillcrest High and Hamilton Boys bandmates. Last year the band won the regional final ahead of Betend Rocket in second.

The top 13 Waikato bands will perform at the Waikato regional final at The Meteor on Friday 28 June, starting 7pm with tickets available at the door or online through Ticketek.