Reds among early pacemakers for title Cambridge are among the early pacesetters to challenge for football’s Northern League second division title. With a quarter of their programme completed, the Reds are showing they have the talent – and a new-found resilience – that suggests they can be title contenders when the competition finishes in September.

This week sees the Reds complete a string of three matches in eight days. On Good Friday, the team rescued an amazing win by scoring twice deep in added time to overcome league newcomers Greenhithe Catimba 3-2. The Reds travelled to Ngongotaha for an ANZAC Day fixture and will host Auckland club Unimount Bohemian Celtic at John Kerkhof Park this Saturday.

In the game against Catimba, Cambridge were trailing 2-1 when the 90 minutes was up. Desperate, the Reds threw everyone forward in a last-ditch effort at John Kerkhof Park. With five minutes of added time played, striker Dylan Blair looped a header over Catimba’s goalkeeper Camilo Cabezas and the Auckland side’s defenders could not stop the ball from trickling across the goal-line.

Tied 2-2, the Reds put together another attack. Winger Callum MacLeod – who had tormented Catimba all game – drove hard to the byline and crossed for Blair to smash home the ball for the winner. The goal completed a hat-trick for 21-year-old Blair and clinched a win for Cambridge that moments earlier had seemed unlikely, if not impossible.

Earlier, it was Blair who gave Cambridge a 1-0 lead when he nodded home a classic poacher’s goal from close in after 13 minutes of the game, played in warm sunshine. The lead didn’t last long as Matias Miranda weaved through the Cambridge midfield and shot the equaliser after 15 minutes. 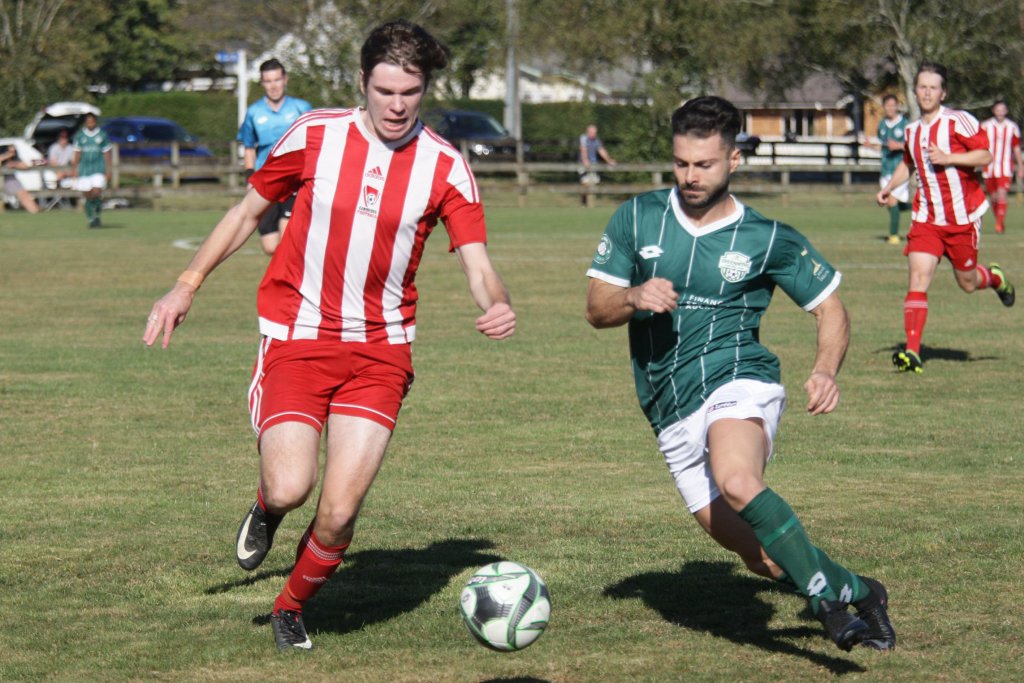 For the rest of the first half, the sides traded attacks and both sides were guilty of niggly fouls. Catimba found themselves reduced to 10 players in the 42nd minute when referee Ashley Wilson red-carded Catimba’s Jorge Saint-Germes for a crude challenge on Cambridge goalkeeper Patrick Steele.

Despite their numerical advantage, Cambridge found it difficult to break down a well-organised Catimba in the second half and the visitors took the lead in the 64th minute through Clement Chesse.

For the remaining half-hour, Catimba defended gamely, repelling repeated Cambridge attacks and frustrating the home side and their supporters.

But it was Blair who had the final say in the result, his hat-trick providing Cambridge with a win that keeps the side in touch with the divisional leaders, and maintains the Reds’ unbeaten start to the season

In the curtain-raiser game, a youthful Cambridge reserves side comfortably beat Catimba’s second string 3-0. Cambridge always looked the fitter and better-drilled side as they methodically earned their win in sunny conditions.

Alex Mukaka, playing a midfield role for this game, put the home side ahead after 15 minutes with his third goal of the season.

Cambridge had the majority of play for the rest of the half and deservedly doubled their lead in the 45th minute when striker Andrew Taylor headed home from five metres out. The highlight of the second spell was a spectacular goal, struck from 25 metres by Johnny Sanchez, that gave Cambridge an unassailable 3-0 lead in the 53rd minute.

Cambridge were content to see out the match, controlling most of the possession, and were delighted with their clean sheet after conceding six goals in each of their past two outings.

Cambridge’s third team lost 2-0 in the WaiBOP Championship to a youthful Hamilton Wanderers at John Kerkhof Park on Saturday. The home side applied early pressure and could have gone ahead when Jason Szabo found the net only to have his effort ruled offside. Wanderers scored late in the half and then added another after the interval to take the league points

The club’s women’s and youth teams had breaks over Easter.