Reading with ruby has special benefits Ruby listens carefully while Zarah Sharma reads to her.

Reading has become one of the ‘cooler’ things to do at St Peter’s Catholic School since a delightful former student and Ruby the miniature schnauzer joined the reading programme run by literacy support teacher Heidi Osborn-Dunn.

The former student is 24-year-old Tayla Missen, who has Down Syndrome. A St Peter’s school pupil from the age of five, Tayla returned last year to join the school’s adult-support reading programme and now comes in twice weekly to listen to the younger children read.

“I love being around the little kids. A few of them have difficulty reading, so I help them with the words,” she said. “I sometimes also help with their handwriting and maths.”

Tayla leads a full life when not at St Peter’s. She graduated from Cambridge High School with merit and excellence in office and computers, and is a youth leader with St John. She also enjoys and mentors hip hop dancing, does stocktake for a clothing outlet, does scrapbooking and cooking, and babysits her niece.  As a great advocate for others with Down Syndrome, Tayla noted that March 21 was International Down Syndrome Day, and said it was important to raise awareness around the condition.  “I wanted to come back to St Peter’s and help them because I love it here. They did such a lot for me.”

Another star attraction in Heidi’s programme is Ruby, a mild-mannered rescue dog who is part of Danielle Schaad’s family. Once a week for the past year, Danielle has brought Ruby in for ‘Reading to Ruby’ remedial reading sessions.

“She just sits quietly next to them as the children read; I’m there just to help with the words when needed. But because Ruby’s there and it’s done in a very non-judgemental way, the children are more relaxed about their reading,” said Danielle. 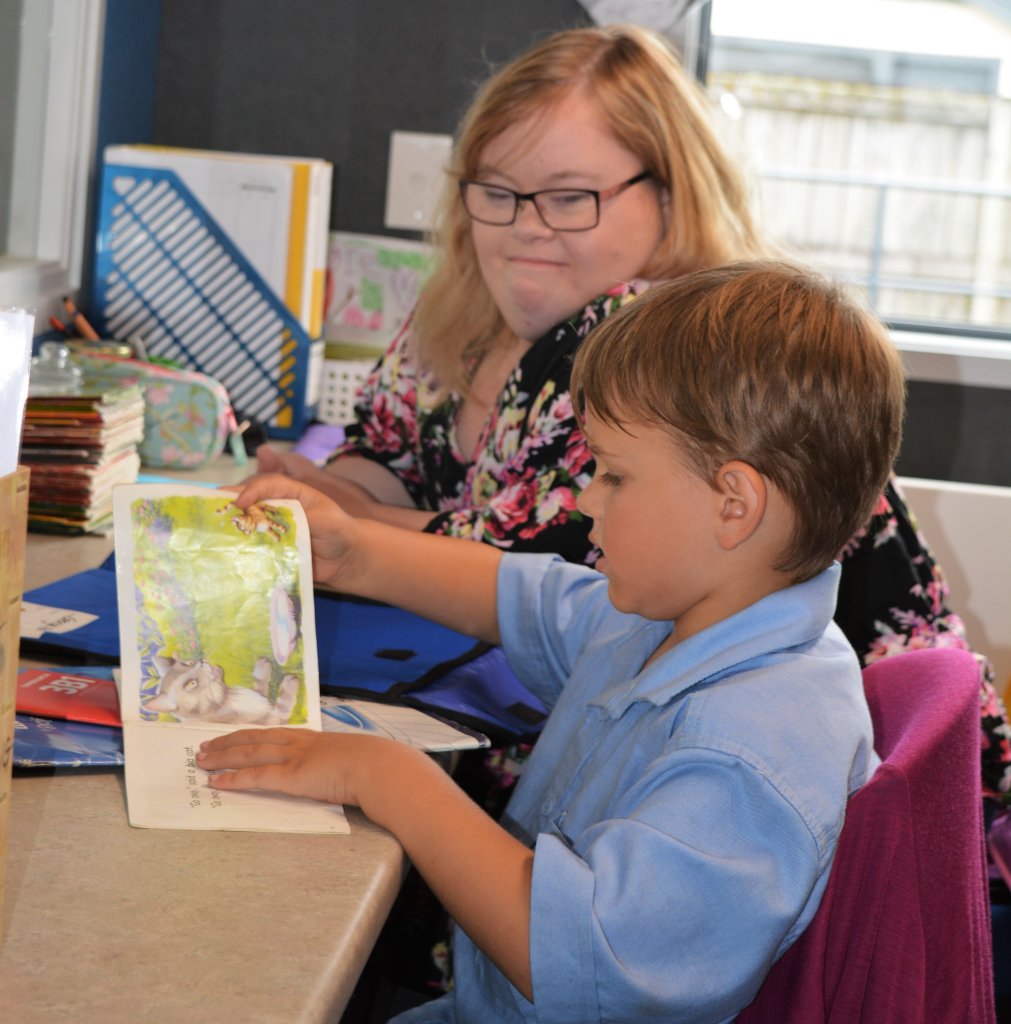 “International research has shown that having children read to dogs has many benefits. It is a more relaxing environment for them … it’s less intimidating than reading to adults.”

She said both Christchurch and Auckland city libraries offered Reading to Dogs programmes.

Describing herself as a “passionate volunteer”, Danielle has also helped special needs adults with their reading and said using Ruby helps lift reading levels across the age spectrum. “It’s such a simple principle, but it works.”

Heidi said several St Peter’s pupils had made significant strides in their reading since Ruby had come on board. The little dog has become a popular drawcard card in more general terms. “We’re finding that children who don’t necessarily need the remedial reading also want to come and read to Ruby.”

The programme is further enhanced by voluntary hours provided by about eight adult support helpers, many of them contacted through the neighbouring St Peter’s Catholic Church.

“They come in for about an hour a week to listen to the children doing their reading, one-on-one,” said Heidi. “We’re finding them a great help – and everybody involved seems to really enjoy that special time.”