Oh-so-close for Reds in football derby Cambridge went within a few seconds of keeping their 100% winning start to the Northern League season but conceded a draw to Claudelands Rovers with the last kick of the match.

With six minutes of added time played, and Cambridge leading 1-0 at John Kerkhof Park, referee Sarah Jones was set to blow the final whistle when she ruled a tackle in the penalty box was deserving of a spot kick.

Claudelands Rovers’ captain Bailey Webster struck the ball home and the match was over, the Waikato rivals tied 1-1 in the Lotto NRFL second division derby. It was an agonising end to the game which Cambridge had controlled from the hour mark when Rovers were reduced to 10 men with the sending off of Johnny Konings.

The Reds had taken a deserved lead in the 67th minute when a goalmouth melee gave Cambridge defender Jack Portegys the chance to ram the ball home from close in.

The scoreless first half had been an arm wrestle between two fit and skilful sides, both of whom had won their opening two games in the competition. Neither side had created a clear-cut chance and possession had been shared.

For the final third of the match, Cambridge had chances to add two or three goals but couldn’t finish. And Rovers, to their credit, kept pushing forward till the end and earned themselves a draw which keeps both Waikato clubs unbeaten. 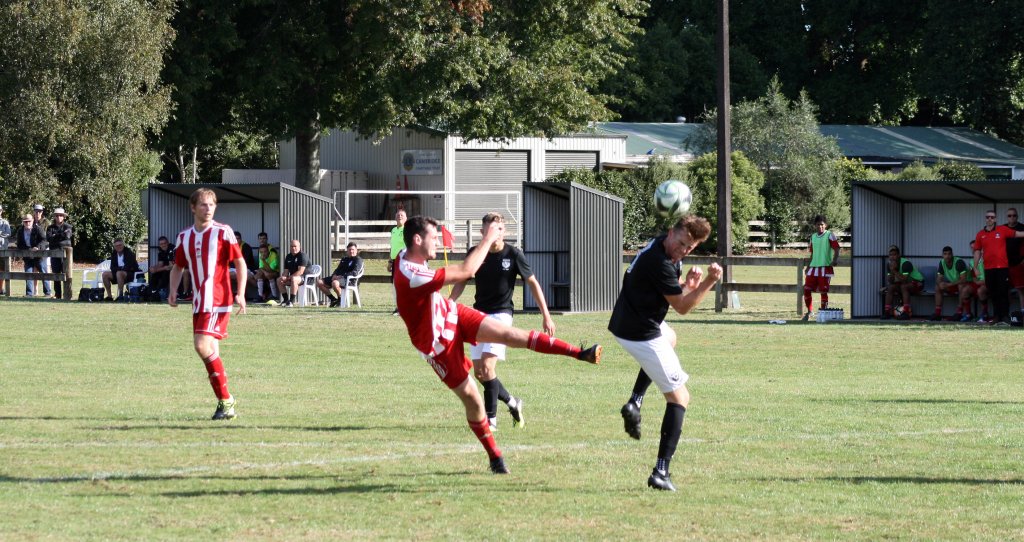 For Cambridge, the defence was solid, the midfield was ably led by captain Nathan Claridge and forwards Callum MacLeod, Dylan Blair and Luke Stephenson (until he was substituted) kept the Rovers defence stretched.

Despite the disappointment of the draw, the Reds again showed they have learned from their season in the Northern League last year, and show a resilience missing in the past. Their next game is on Good Friday when Cambridge hosts Auckland’s Greenhithe Catimba. The first teams play at 3pm, while the reserves match up at 12.30pm at John Kerkhof Park.

The reserves lost 6-4 in a frantic match against the Claudelands Rovers second string on Saturday. Scorers for Cambridge were Alex Mukaka (2), Crisian Angulo and Riley Higgs. The result leaves Cambridge mid-table in the reserves competition.

In other games, Cambridge D1s drew 1-1 with Te Awamutu in the Waikato Division 3. Te Awamutu took a first half lead but Mariano Castellon scored the equaliser for Cambridge in the second spell.

In Division 4, Cambridge D2s were beaten 3-0 by Morrinsville at John Kerkhof Park. Scorers for the visitors were Aston Hurd (2) and Kynan Bilton.

Cambridge’s women’s team lost their Waikato Division 1 match 3-2 to Claudelands Rovers. Cambridge’s young side worked well against the Hamilton visitors and scored through Kym Thomasen and Olivia Sutherland. Sutherland was the Hill Homes Player of the Day.

On Sunday, both Cambridge’s WaiBOP Federation Youth/Junior League teams had close matches with Hamilton opposition. The U-13 boys lost 4-3 to Melville United, despite a Blake Taylor hat-trick, while the U-12 boys drew 4-4 with Hamilton Wanderers.