St Peter’s School trust board chairman John Erkkila says the sale of some of the school’s farm land for subdivision will benefit both the school and wider community.

Combined with the Waipa district, it needs around 212 new households per year to cover the growth.

That’s why council staff and independent developers are putting plans in place to cater for the forecasted 13,456 additional households in the next 30 years.

The town’s population boom has been largely catered to in the past half-decade by Cambridge Park, Cambridge North and St Kilda subdivisions, but in the past three years Waipa District Council saw they were nearing capacity, and identified new areas of residential growth in Cambridge.

These became known as the C1, C2 and C3 growth cells, located to the north west of Cambridge. Council has moved to rezone these areas from rural to residential and commercial areas, which will come into effect on March 14 after public consultations closed in January of this year.

Already the 143-hectare C3 section between the Waikato River and Cambridge Rd is booming with development, with the Te Awa Lifecare resthome and village nearly completed, and plans in place to add 600 to 800 new homes next to St Peter’s School.

Plans for the St Peter’s subdivision are in the early stages – sections won’t be available until at least 2021, but the idea is to make St Peter’s the centre of a community.

“To cut a long story short, we have a view to maximising our assets … and how can we create economic sustainability out of the organisation.”

The idea is that the project will utilize assets to benefit the school and the wider community. More details will be released later this year, when the project is opened to the community for feedback.

“This is very early days.”

The subdivision will likely include 3.5km of riverfront property, covering an area from the river almost to the road (Cambridge Road), stretching from the Te Awa development next door to about 200m east of the Avantidrome. 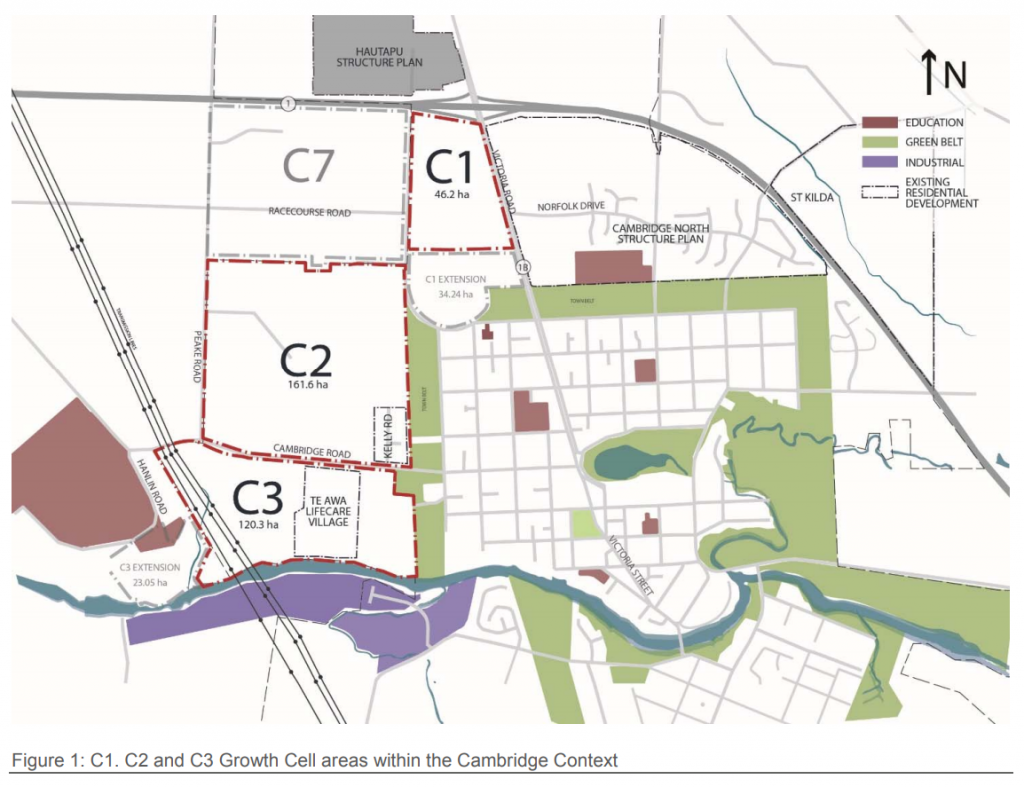 Cambridge’s new C1, C2 and C3 growth cells. Waipa District Council has rezoned these areas, a total over 350 hectares to the north west of Cambridge, into residential areas (as of March 14) to help facilitate Cambridge’s growing population.

The entire C3 growth cell is made up of four terraces, with steep escarpments between each terrace and down to the Waikato River. The Te Awa Cycleway runs through it, with plans in place to continue the cycle way further along the river towards Hamilton.

The Victoria Rd C1 growth cell will stretch from the expressway to the town belt, and along Abergeldie Way in the west. It includes 46.2 hectares of rural land, now rezoned for residential use, with some commercial or light industrial uses on the eastern side.

C2 runs along the western town belt, from the edge of the athletics grounds, along Cambridge Road to Peake Road, and just over a kilometre down Peake Road, encompassing 161.6 hectares. It could be used for rural or residential purposes.

“Once the services (water etc) are available, great residential growth in C1, 2 and 3 will stimulate further developments around Cambridge,” said council’s Manager – Planning & Regulatory Wayne Allan. “It’s all part of the structure plans for growth and development around Cambridge. So it’s all pretty exciting.”

Very early plans are in the works to designate part of the C2 area for a new school, with discussions “on the way” between council and the Ministry of Education.