Food in a Minute star in Cambridge for good 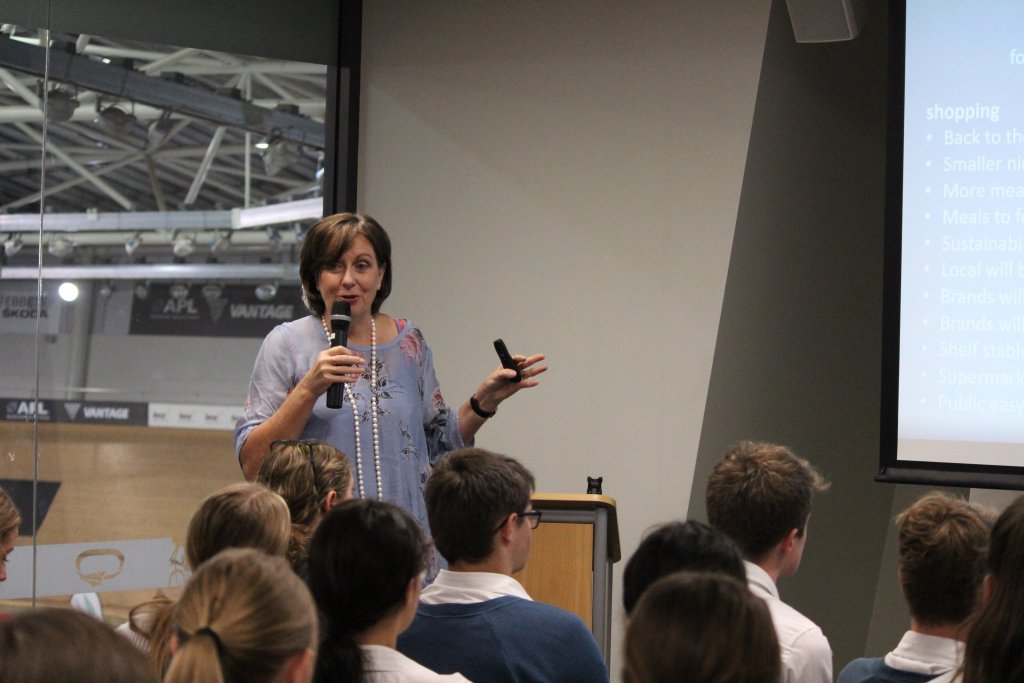 Allyson Gofton spoke to St Peter’s students on March 1, having moved to Cambridge 10 days prior.

Allyson Gofton, the popular face from television’s Food in a Minute, says living in Cambridge is just brilliant after spending a quarter century in Auckland.

“It’s called the town of trees and champions but they should add manners on to that,” she laughed. “It’s the most well-mannered town I’ve ever been to. I love the way people stop at a pedestrian crossing!”

The Tasmanian author of over 30 cook books made an appearance at the Avantidrome earlier this month, speaking to a group of St Peter’s School students about her nearly three-decade career in New Zealand media – cooking, writing, marketing and becoming the familiar face Kiwis would see every night on television at 5.59pm.

Having officially become a Leamington resident in the past fortnight, she’s now finding her way in Cambridge with husband Warrick, who still commutes part of the week to Auckland, son Jean-Luc and daughter Olive-Rose, both students at St Peter’s School.

“It’s a community that raises a family and this is a lovely community to raise a family in,” she said.

“And everybody is so unbelievably friendly. Not that Auckland people aren’t friendly, but people have more time here. It’s a “Hello, how are you?” rather than just a “Hi” in Auckland, and that’s the difference.”

Still settling in, Allyson says she has a three-car garage literally full with beautiful items from her food shoots over the years, including the plates, bowls and platters that featured alongside her famous dinners. She’s planning on having “the mother of all garage sales” to get rid of it all, and will keep us posted on when that will be open to the public.

“I have not yet found the iron,” she laughed, having resorted to an old girl guides tip to press a school uniform under a mattress.

With the last 25 years spent in the Auckland suburb of Meadowbank, Allyson is still getting used to doing the school drop off in half the time it used to take. “It really makes it a pleasing trip,” she said.

Now doing yoga twice a week, and a frequenter of the Te Awa walk and cycle way, she feels as though she can start to call Cambridge home.

“Driving through Cambridge this morning, it was so alive, people out having breakfast. I just smiled and thought, this little place buzzes.”

As for our food, the celebrity chef said she was quite impressed with what the cafes, restaurants and takeaways have to offer.

“We haven’t had a bad experience,” she said. “I do have to say I’m quite impressed with the Queen Vic Chippy, their grilled fish wrap is fantastic value for money with good flavour, a really good healthy takeaway.”

Encouraging St Peter’s students during her talk on Friday to pursue their passions in their career, highlighting her own experiences in the process, she said she hoped the message really shone through.

“One of the things I hope I’ve encouraged them to do is, you don’t always have to rise to be the general manager of a big international company, you can have a good happy healthful life in many of the towns that New Zealand boasts, really we can.”